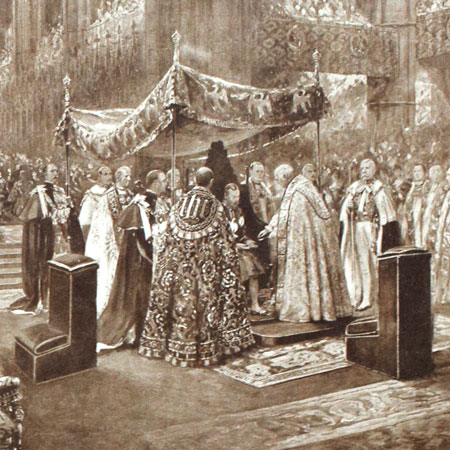 Many years later the following documentary was recorded about the Coronation with commentary, interviews and footage that provide background to the ceremony, the planning, and people involved in various aspects of it.   I find it very interesting and at times quite entertaining.

Last year, Prince Charles made the following documentary in tribute to his mother’s Diamond Jubilee. Originally, in 2013, I embedded the YouTube video here but it has since been unavailable for Australian viewing because of copyright reasons (perhaps because the video is sold here as a DVD).  Thus, in September 2015, I have changed to the video to the two-part presentation on DailyMotion.  It has the occasional advert but some interesting footage.  By the way, In 2015 I read that the Queen is annoyed by the fact that when she is nervous, such as in making radio and TV speeches, the tone of her voice rises higher.  So that explains something.  She has also commented that when she doesn’t smile she looks cross.

During the past week while putting together my posts, and doing Google searches regarding The Illustrated London News,  I came across this fascinating website – click here.   Down the left side is a navigation bar to a range of magazines and other items.  Click on any of these to bring up the post concerned.  I have chosen the Coronation Week Double Number which you may have seen on my Coronation post on 1 June about “The Lead-up”.   On Charlequins there is a description of the contents of the Number and then a collection of photos of pages from the issue, including advertisements.  The second to last photo reminds me that I had meant to include the colour photos of the Mall decorations by day and night in my own post, but I forgot to take photos of the page.  If you click on any of the photos it opens up a much larger image and a list of thumbnails at the bottom of the page.  You can then see all the photos by scrolling back and forth with the left and right cursor keys or whatever else works best for you.

I thoroughly recommend you look through all the magazines on the Charlequins post/page navigation bar, if not for photos of the Coronation you haven’t seen elsewhere, but for many of the advertisements.  Some of the issues have great photos in regard to the Coronation, but also some great advertisements for what are now classic cars I drool over – including the Sunbeam Alpine (Country Life has a great colour advertisement), Daimler Hooper coach built, standard Daimler, Rover,  Rolls Royce (also with a coach-built body) and Armstrong Siddeley.  But it’s not just cars, it’s what else might interest you.  There are, for example, the most splendid advertisements in The Field magazine covering a wide range of items. 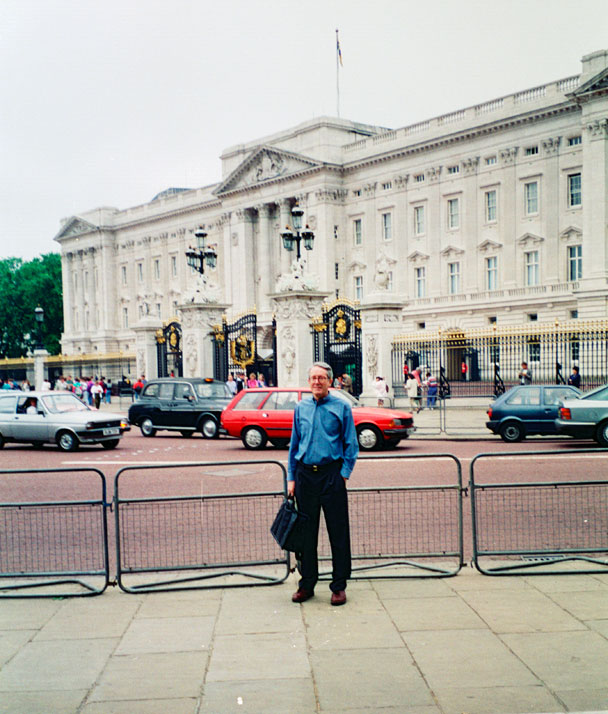 The above photo shows me in London in June 1993.  The barricades are there for the procession to and from the Horse Guards Parade in Whitehall for Trooping the Colour the following Saturday.

On Wednesday, 2 June 1993, in the morning I walked from The Pelham Hotel, where I was staying in London, to Kensington Palace where I saw an exhibition of coronation robes and dresses for the past 200 years (it may have been longer), including the coronation dress and robes worn by the Queen 40 years earlier.  No photos allowed.  After that, I caught a double-decker bus to the city and on the way I heard the gun salute to mark the anniversary.  In the evening I was given a personal tour of Westminster Abbey with an official guide volunteer who I knew quite well.  Parts of the Abbey were still closed off because of visit of the Queen in the morning.

Here might be as good a place as any  on my sight to recommend you take a look at a page published last month – CLICK HERE.