Yesterday afternoon I watched Gary Rhodes cook a poached egg in a saucepan and the white folded over the yolk. Today I tried his method myself. Here is the result. 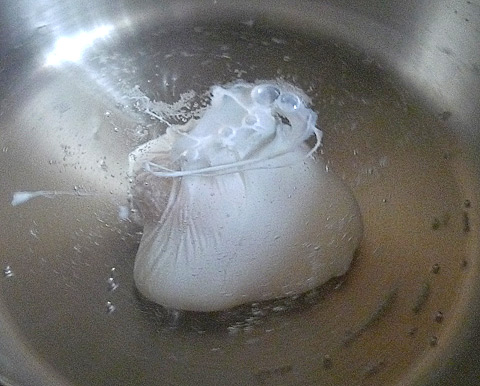 I had no real sleep Thursday night because of record overnight heat in Melbourne for November, and also because I came down with a bad and debilitating cold.  So my best effort last night was to post the above photo and make a two line comment without any further observations.

Tonight I found that Ralph has made a comment, which I quote:

As a non-cook, I only want to know one thing … did it work?
Well, maybe a second query … did ya eat it?
Final puzzlement … did it taste better than it looks?

Well, it’s just struck me that the egg looks nothing like the usual poached egg which gets spread in the pan, and chefs on TV trim off the ragged edges of the egg white to make it look neat.  So I suppose Ralph thought my first attempt at poaching an egg the Gary Rhodes way had gone wrong (to the contrary, I was surprised that it went so well – just as hoped).

As background I should explain that Wednesday last week I had lunch at France Soir, the French restaurant in South Yarra, and for an entree I ordered their Oeuf Meurette – poached egg on croutons with mushrooms & bacon in a red wine sauce.  The poached egg was (I presume) cooked the same way as above, as it looked like a large purple golf ball sitting in and covered in the purplish coloured red wine saucc.  The three others at my table wondered what it was, and I might have too, except that I knew what I ordered.

The secret of the above method is to cook the poached egg in a saucepan and add water until it is at least 2″ deep, to enabkle the egg to sink well below the surface.  Add a bit of white vinegar to the water.  When the water comes to the boil, reduce to a simmer and swirl the water around to create a whirlpool (if you can, or near enough) and then break an egg into the centre of the whirlpool (or swerl).  The egg then sinks and the egg white closes around the yoke, in a neat ball with little or no wastage of the yolk.  Cook the usual time for poached egg depending on preferences  – say 2 to 3 minutes.