On Friday I drove to Harvey Norman in Chadstone to have a look at induction cookers and learn more about them. I’d never noticed them before as I’ve only looked at the new big gas cookers over the years, when I’ve felt like having a little browse to fantasise over what could cooking be like in another world to mine.

I was a given a quick demo of boiling a quantity of water in a stainless steel wok, and I must admit that it came to the boil more quickly than I’d expected.  But overall, I wasn’t impressed.  The induction stovetop I saw was very plain looking and I saw it as totally uninteresting – not at all like the gas stovetops with their various shaped burners, some of which, perhaps for woks, look very powerful.

This morning I drove to Clive Peeters in Richmond and had a look at their range of induction cookers.  Still very plain but the unit that was used to demonstrate the boiling of water was much more interesting than the one above.  It had small icons on it to touch for instant settings for boil, simmer and low heat.  This time I was very impressed and saw the induction stovetop as simple, elegant, and so easy to keep clean (just a wipe with a damp cloth).  By contrast the gas stovetops looked too busy and complex, and as a consequence, too hard to clean.

I should mention that what particularly impressed me with the demonstration this morning was not how quickly an induction stovetop can bring water to the boil, but how quickly it can reduce the boiling water to various levels of simmer, down to only a couple of small bubbles or none at all.  I was told that you can set the heat so low that you can melt chocolate on it and let the stovetop run for hours.

Not only did the stovetop that was demonstrated impress me, but the maker had a rangehood which amazed me.  I didn’t know rangehoods could be so impressive.

Fantasies aside, the real reason I went to Harvey Norman on Friday, and to Clive Peeters this morning was to buy a Breville ikon Induction Cooker – a portable hob priced at A$169.95,  to try out induction cooking at home, before even thinking of deciding on an induction stovetop if I ever upgrade my 26 year old kitchen.

On Friday I drove to Harvey Norman in the hope they’d have a Breville BIC200 in stock, but they didn’t.  Nor did David Jones or Myer, or all the local dealers I rang, and I was beginning to despair until I rang Clive Peeters at Malvern, and the guy I spoke to told me their Richmond store had them in stock.  So that’s when I made a decision to visit that store this morning.  And I did.  I fell in love with the BIC200 on sight.  It’s small, elegant and lightweight.  I’d worried that I wouldn’t have room in my home for another appliance, but this one is worth making space for.

I used it today for cooking potato in a pressure cooker for a salad lunch, and for an omelette cooked in my omelette pan.  Great results in both cases. 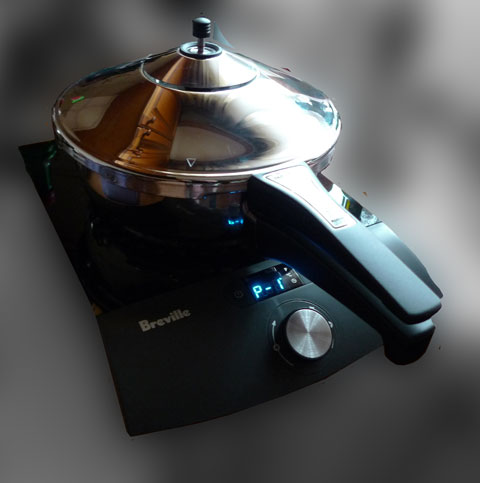 Here you can see the Breville with my old, but beloved Kuhn Rikon 2L pressure cooker/non-stick frypan, on the P-1 lowest setting on the Breville. (Ignore the dot at the top right of the 1 numeral, which makes it look like an r in the photo.

The important thing to note is the pressure indicator on the top of the pressure cooker.  It has risen way beyond the 15 psi setting, even with the Breville at its lowest P-1 setting.  It shows that a A$169 induction cooker can’t match all the virtues of a A$4,500 induction stovetop.

But I’ve already become fond of the Breville. 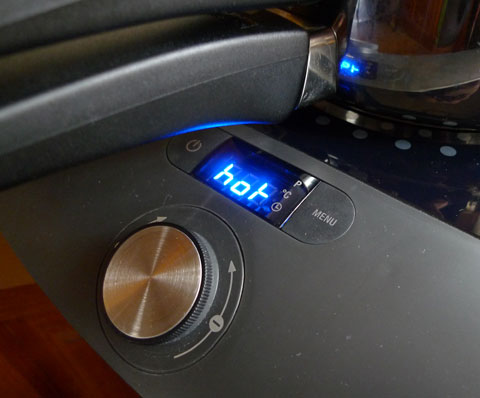 This is a warning at the end of cooking, that the Breville BIC200 cooker top is hot.  The cooker looks no different between hot and cold, so a warning is useful.

In the coming weeks and months I’ll keep using the Breville to see how it works out compared to gas cooking.

You can read about the Breville cooker at