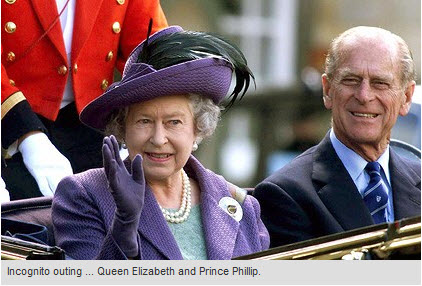 This is the photo “The Age” used today in a report that:

Queen Elizabeth stunned theater-goers in London this week when she and her husband slipped in to see a play unannounced and at the last minute, newspapers reported.

The Queen and Prince Philip apologetically squeezed past other theater-goers to get into their seats for the West End production of World War One play War Horse at the New London Theater.

“The Queen and the Duke sat down as the lights dimmed and it was a huge shock when people realized who they were,” said a journalist at the show for The Lady magazine. “They were incredibly apologetic for asking people to let them past and there was no hubbub or fuss about it all.”

The Queen and her husband often make incognito trips to the West End, but are rarely spotted, an aide told London’s Evening Standard newspaper.

“The Queen has regularly undertaken similar private visits throughout her reign without any fuss,” the aide said. “It allows her to live a bit more of a normal life.”

The journalist from The Lady said the queen appeared to enjoy the performance, disappeared during the interval and then reappeared discreetly.

“When they left at the end, they were given a round of applause, which the Queen acknowledged with a wave,” she said.

That’s interesting to me for two reasons, apart from the photo used, no doubt with a smile, to purportedly show the Queen and Prince Phillip on an incognito outing.

1.  Many years ago in Adelaide I attended a theatre premiere put on by friends of mine from Brisbane, to which the State Governor and his wife were invited.  My friends arranged that I would sit in the same row as the Vice-Regal party, but at the end of the row so they would all have to squeeze past me, just as the Queen did in the story above.  But no.  Just before the party arrived I was moved along to the last vacant seat in the row so that they wouldn’t have to squeeze past me.  As a result, I ended up sitting next to the aide-de-camp in his full uniform (vaguely recall it was naval, but it could have been army).

2.   Back in my late teens I used to go to the pictures in Mount Gambier at night two or three times a week.  No TV in those days.  I used to ride my bike in, park it somewhere, and slip into the theatre just as the lights dimmed and sit in the back row.  Just as before the lights would start coming up at interval, I’d shoot out and go for a wander down the street until I could hear the bell ringing that interval was almost over, then I’d sneak back as the lights dimmed.  And of course I’d leave quickly just as the main movie ended.  I’d never be seen or noticed by others in the audience.