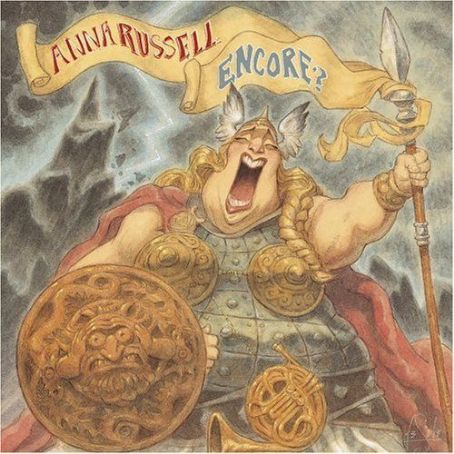 Following on from my post about Florence Foster Jenkins, I am now writing about Anna Russell.  Anna was from a later period that Florence Foster Jenkins, but unlike Florence, Anna deliberately set out to be funny – and a lot of her humour came from making fun of absurd.  When I was young, living in Mount Gambier, recordings of Anna Russell performances (she played to live audiences) were often played on ABC radio.  And I think one of her recordings was even played during a music education program at school.  However, beyond that, I knew very little about her.  A short biography can be found on Wikipedia here.  There are quite a number of recordings of her performances available on CD.  A number of the CDs seem to have the same performances on them, and while they might be essentially the same basic performance, they might differ in detail if they were recorded in a different location.  Some of her jokes have a local content and would therefore change from New York to London to Sydney etc.  There is one show she gave at the Sydney Opera House, and she made a great deal out of its unsuitability for opera.  One thing to bear in mind when listening to her work is that is from a different era – one I remember very fondly.  I was going to write that they were more innocent and simpler times, and they were in some ways, but then I remembered there had been two world wars, and my father fought in the first one – as a lighthorseman… Another musical comedian at the time was Victor Borge.

Here is an example of Anna Russell at work.  In this sketch she is playing the part of the President of a Women’s Club giving an introductory speech before a small recital put on for members present at the meeting.  I suppose it’s a bit like a camera club having a guest speaker at their monthly meetings.  In her act, I think Miss Russell is sending up the type of club and function, as well as the President of such a club.  I hope you enjoy it.

In November 2012, I made a post about Der Ring des Nibelungen, which you can visit by clicking here, and this gives you an idea of the size of the opera cycle.  Coming back to my present post, the feature image is an album cover that relates to Anna Russell’s brilliant sketch summarizing the Ring der Nibelungen.  As part of this sketch she plays the role Brunhilde (among others).  If you do a Google search for Brunhilde Wagner images, what you find will give you a good idea of the kind of absurdity this opera brings – with the beautiful young Brunhilde played by – well, see  for yourself here.   You can listen to this sketch, with images, in the youTube video below.  I suggest you click on the YouTube icon and read what the person who posted it has to say.about it.

Below is Part 1 of the same sketch showing Anna Russell performing it.  However, it is a different performance and you might notice that she makes some small changes to the wording.

While Anna Russell has a good deal of fun lampooning the subject of her sketches, her humour has a lot of truth behind it.  You might notice that her audiences often react not only by laughing. but sometimes applauding when she has said something they have perhaps often thought themselves.  Of course, Anna exaggerates a little at times, but not without reason.  For example in her synopsis of the Ring Cycle, she says the first opera in the cycle (Das Rheingold) begins with an orchestral chord in E Flat Major that goes on for about six minutes.  Now it might not go on for six minutes, but just listen for yourself how long the chord does go on for, even though the recording technicians quieten it down a bit after other instruments begin playing.  In fact the chord goes on until the Rhein maidens begin to sing.  The opera flows on without break which is great when listening to the whole, but extracts such as this can end abruptly.

At the end of the above extract you could hear the Rhein maidens’ leitmotif.  Anna indicated the words had nothing to translate, as you can see:

And finally, a YouTube video of Anna Russell in a different sketch at the same concert in Baltimore in 1984.  Perhaps the sketch is having a dig at the likes of Florence Foster Jenkins.

P.S.  I can’t resist finishing this post by adding Anna Russell’s sketch on Hamlet by William Shakespeare.  She does it as if Verdi had written an opera based on the play.  t particularly amuses me as I studied the play as part of the English subject in my final year at high school.  I have also seen the films with Hamlet played by Sir Laurence Olivier, by Kenneth Brannagh (in a version with an unimaginable cast) and even by Mel Gibson.