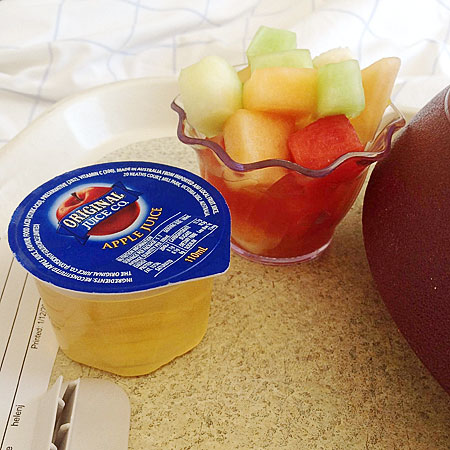 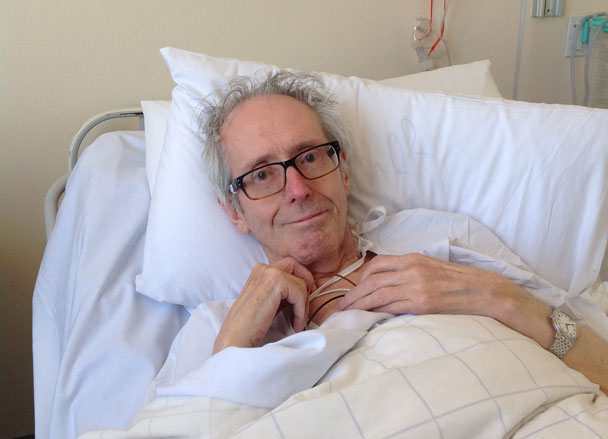 It’s now over six months since I was discharged from Epworth Hospital, Richmond (an inner suburb to the east of Melbourne) on 23 December 2013, just before Christmas Eve.  I had been in hospital since 12 November of which the first two weeks or so were spent in the Intensive Care Unit (ICU).  Being in the ICU had a profound effect on me, not only because of my own condition and being told how close I had been to death, but also because of patients in neighbouring beds, a number of whom died while I was there.  The ICU seemed to have no natural light and I couldn’t tell whether it was day or night except that at night the lighting was reduced to a low level with what seemed like reddish lighting.

It was a relief when I was transferred to the Cardiac Ward on Level 6, and to my single room – ES605. 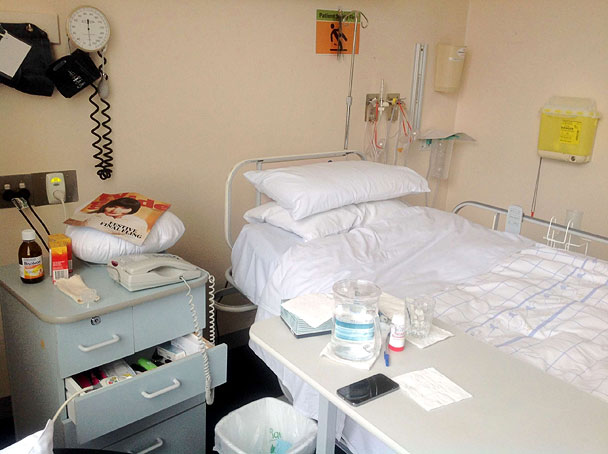 The above is a photo of my bed in ES605 towards the end of my stay. By then I was well able, and encouraged, to get up and walk around, and take photos. 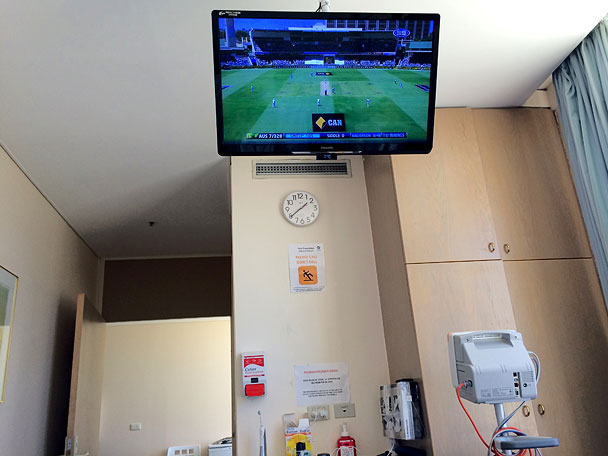 And I could watch TV while in bed.  I enjoyed watching The Ashes series when the cricket was on. 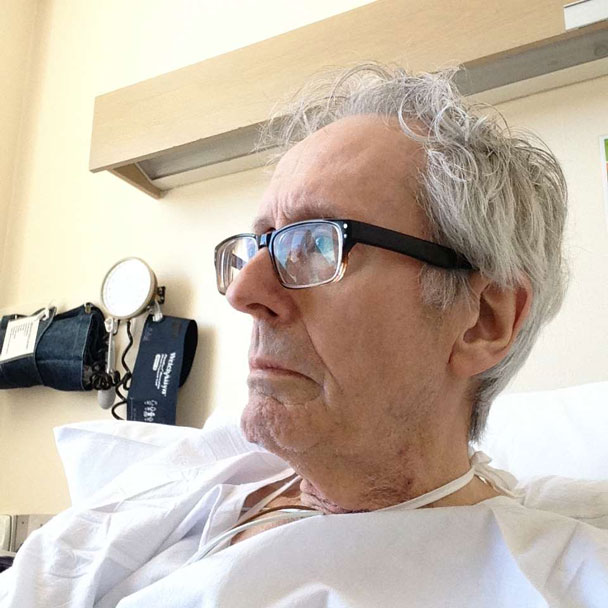 Apart from watching TV, I also had a window view from my bed: 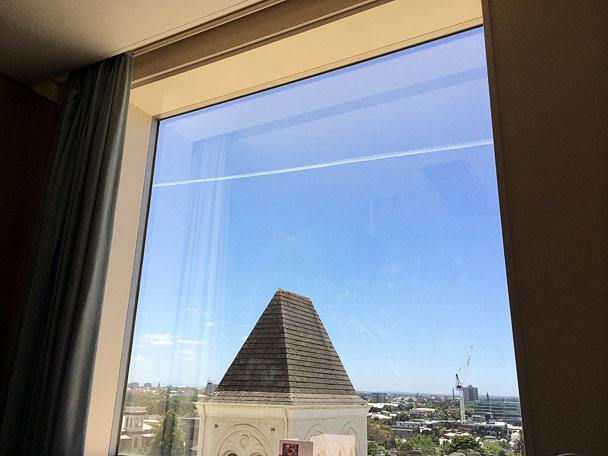 The most noticeable feature of the view always struck me as being a pyramid, especially at night.  It added to my feeling of being somewhere strange and exotic. 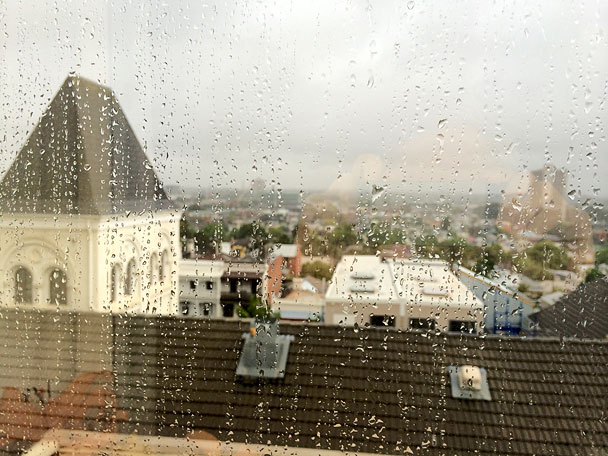 The weather was more of a concept to  me, than a reality.  I could see what was going on with the weather outside, but my room itself was chilly for me even on the hottest days of summer.   A little bit of rain provided a diversion. 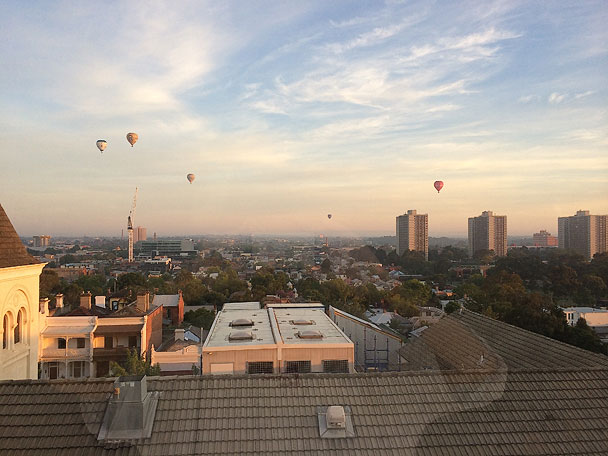 A feature of hospital life was early to bed and early to rise (for my first injections of the day).  But sometimes there was an extra treat outside on a fine still morning, with the hot air balloons gliding past.  Oh for a telephoto lens!  I was using the camera in my phone. 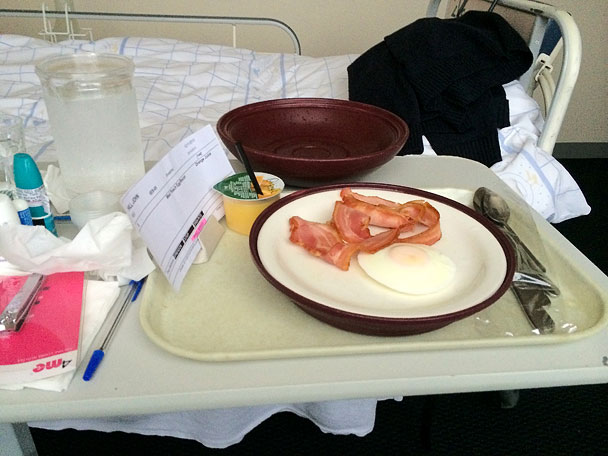 Breakfast was also treat every morning.  I kept my meal orders to what I knew I could eat and only once did I let my eyes and meal order be bigger than my stomach.  That’s the time I ordered a double serve of pavlova as desserts for the evening meal. 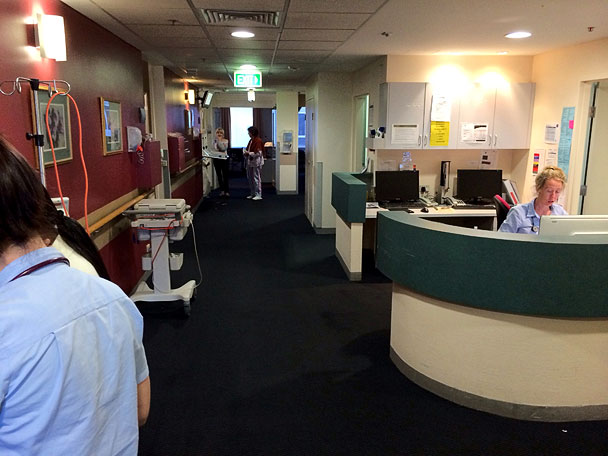 As time went on I was able to get around and I was required to walk around the ward at least twice a day.  So one day I took a few photos.  The one above is the view of the Cardiac Ward from my room’s doorway.

Now, I have already posted two photos of myself in my hospital bed in room ES605, but here is one that I took (another selfie) once I was able to get up and get dressed for part of the day.  Getting out of my hospital gown made me feel more like I was getting better.  This photo was taken before I’d managed to have a good shave, and I still had a little goatee. 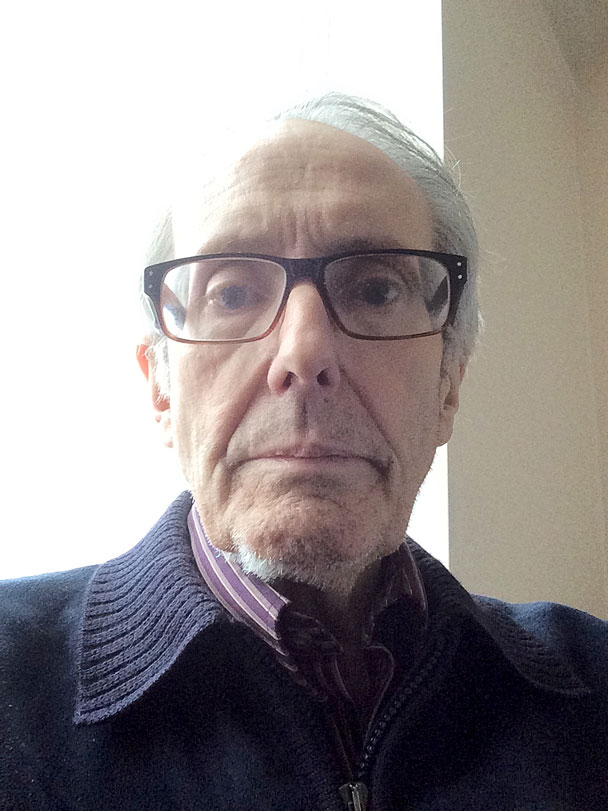 After spending six weeks in hospital with no prior notice, I was surprised at the amount of packing I had to do in preparation to being discharged on 23 December.  Apart from clothing which I bought while in hospital, there were cards (birthday, get well and Christmas) all the literature from the hospital regarding what I needed to do once I was responsible for my own care, and two bags of medications.

The biggest shock on the day that I got home was in the evening. I found myself alone and missing the company of all the doctors and nurses popping into my room every so often. And there was no-one to cook and bring in my dinner, or make sure I was tucked in safely when I went to bed, or to wish me good night.

For the first four months I went back to the hospital at least once a week, often twice and sometimes even three times, for tests, check-ups and rehabilitation sessions. And I spent a night in the Emergency Ward on 31 January, and an afternoon and evening a few days later on 4 February.

The frequency of tests and check-ups has eased off since then, which I understand is a good sign that I’m progressing well (or at least am stable), but the after-service still continues and I have appointments at various times throughout the rest of the year.  Planning so far ahead shows a happy optimism by the doctors.

The whole experience I’ve been through has given me a far better understanding of what others may have been through, or will one day go through, and I feel for those who were not as fortunate as I have been to come out of it.

It’s been a very humbling experience in so many ways, and I owe so much to so many at the Hospital who did more than I can ever put into words. 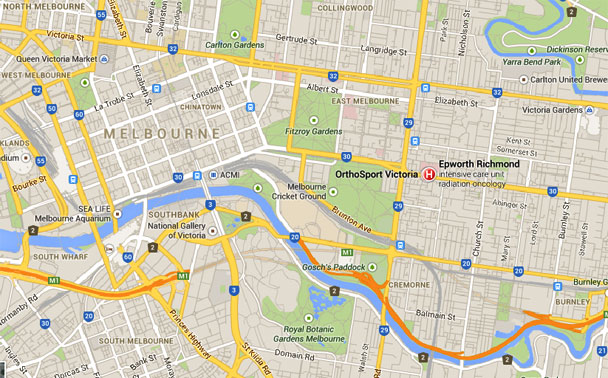