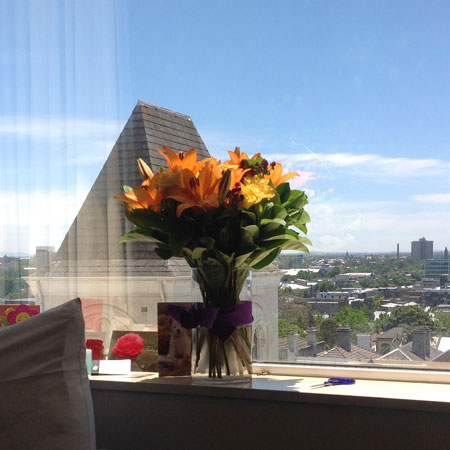 On Monday, 11 November 2013, I made my half yearly appointment to see my GP for prescription renewals and a general checkup. Normally in November I fast before the visit to have blood taken for general testing. But this year I didn’t fast because I felt little bit concerned about more specific health matters. On Monday I made note of the time of my appointment on Tuesday and things I wanted to see the GP about. Four weeks later I found this note in my jacket pocket. I had written:

I had been concerned by shortness of breath at times, and was not sure whether I had suffered another pneumothorax (which I had in April) or if I was suffering anxiety.

On Tuesday I decided to drive to see my GP and parked my car at the Arts Centre Carpark. I happened to see the car park manager so I got his business card and told him he might get a call from my doctor at Southgate. And so it all happened. My GP checked me and called an ambulance which took me to the Emergency Department at Epworth Hospital in Richmond and I’ve been in the hospital since – fortunately I was transferred to the Cardiac Ward after I was well enough to leave the Intensive Care Unit after a couple of weeks in the  ICU.

The flowers in the Featured Image were from Peter and Liz Turner.

After six weeks in hospital, I was finally discharged on Monday morning, and f got home about 2.00pm.  It’s not all over of course.  Each day I have to  take 21 different prescription medications at different times of the day based on breakfast, dinner and bedtime.  Fortunately I get some freedom from the regimen at lunchtime.  Dosages vary from one tablet or capsule taken once a day, up to two tablets twice a day.  The tricky tablet is Warfarin.  It comes in three dosages and colours, and is taken at night.  The dosage to be taken varies according to the results of blood tests taken during the day.  The frequency of the blood tests depends on whether the blood test results showing one’s INR are stable, which in turn depends on the food one eats and whether it affects the INR reading.  So no indulging in champagne and wine for me on Christmas Day or New Year.  Only one or two standard drinks per day, with two days a week without any alcohol, is recommended.  Warfarin is a blood thinner, so one has to be careful of cuts and knocks (which easily cause bruises).

I returned to the hospital on Tuesday (Christmas Eve) for a blood test, and have another on Friday morning, then await to hear from my main hospital doctor (by now a friend) as to when I have the next test.  In the new year I have therapy sessions, and weekly heart care sessions, and return visits to specialists as well as my own GP.  Some visits are in January and some as far away as five months (six months from the heart pacemaker being fitted).

It’s a new life ahead of me, including earlier rises in the morning and bedtimes around 10.30pm or earlier.