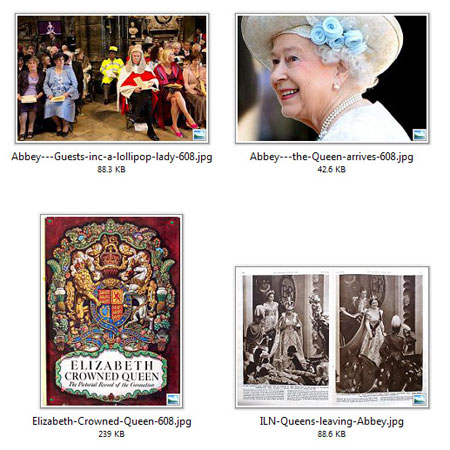 Last year when the Queen’s Diamond Jubilee was celebrated, I noticed that some people thought it was the anniversary of the Queen’s Coronation, so I decided then that, all well, I’d make a post this year about the Coronation on its 60th anniversary. I didn’t begin work on it until 1st June 2013, the eve of the anniversary, and I realized then that it was going to need more than one post, and it would take me time to do. Digging out my magazines and books from 60 years ago, and taking photos of them, selecting the photos to use, and processing them, was an experience in itself. I even did quite a bit of research on Google and experimenting to decide what lens would be best to use for taking the photos. I chose my Canon 40mm pancake lens as best suited for my work. This post is about my workflow in preparing the posts. 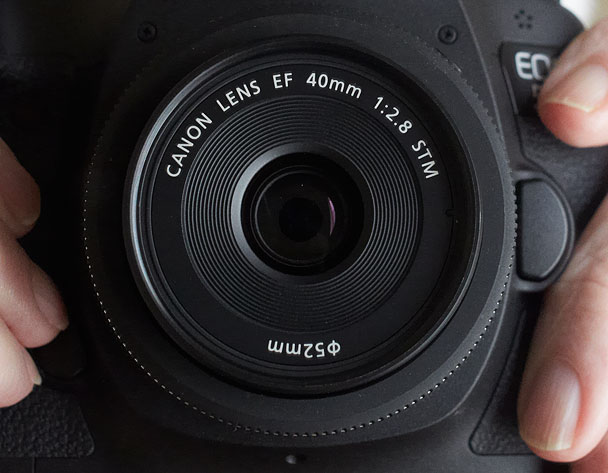 For all the photos I took of magazines and books I used my Canon EOS 5D Mark III with the  Canon EF 40mm f2.8 STM lens.  The lens is often called a “pancake lens” because of its slim profile.  The 52mm you can see in the photo is the filter size, but I haven’t fitted a filter to this lens as a high quality filter would cost almost as much as the lens.

Above is a photo of the lens without its lens caps which almost double its size.  I spent quite a bit of time in Photoshop resizing this photo by trial and error, to get the image life size on my 1024 x 768 pixel monitor.   The diameter of the lens is 61.2mm. 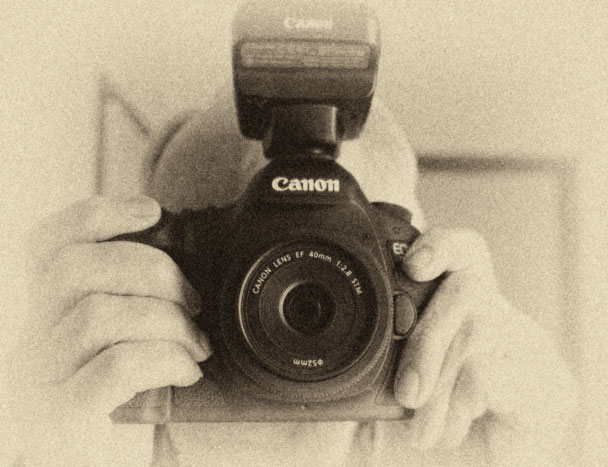 My camera with lens.  It’s the same photo as above but not as tightly cropped, and I’ve applied a preset from the Nik Silver Efex Pro 2 plugin in Photoshop. 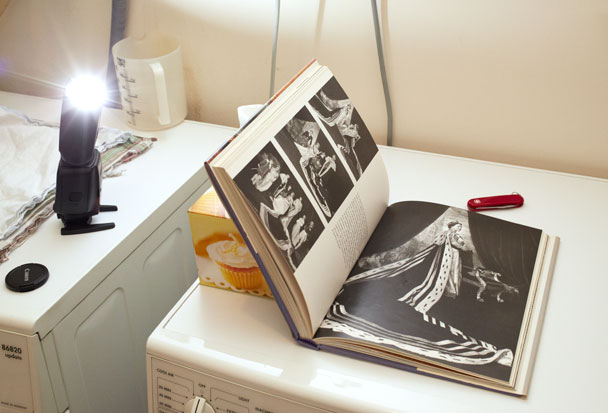 The above shot shows a typical setup in the laundry, with the remote controlled flash on the washing machine and the subject (the Cecil Beaton The Royal Portraits book by Roy Strong) on the dryer. 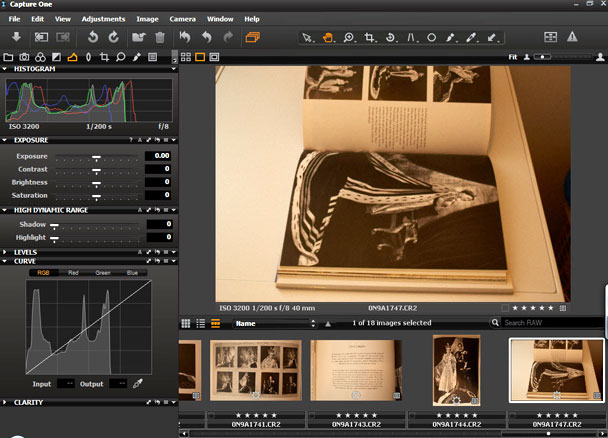 After a photo shoot I use Capture One Pro 6 check out all the photos I took.  I examine the RAW files at 100% size (not shown here) to see if each photo is sharp.  If it isn’t sharp I delete it straight away, except in a few cases where it is my only photo of the subject and is good enough to use at the size I plan to use it at.  At the bottom of each thumbnail I give the photo concerned a star rating.  1 star means I’ve looked at it but I hope there is a better shot, and so on up to 5 stars which means that I plan to export it as a  JPEG file for use in Photoshop.  My 2007 Windows Vista PC has only 2 GB of memory and Photoshop CS5 can only handle and process one RAW file from the Canon 5D Mark III and then its memory is shot.  Even though I finish using the first photo and close it, Photoshop won’t open or process any more RAW photos that session.  I presume from this that Photoshop doesn’t close down files properly and free up the memory.  Capture One Pro 6 is designed to handle big medium format camera files (say 80Mb each photo), and thus has no problem handling my RAW files instantly one after the other.

After I’ve selected the RAW files in Capture One that I want to use in my posts, I batch process them to export them to the foler of my choice as JPEG files in the file size and quality I want.  Normally I choose the original size and 100% quality.  The batch process options (Recipe in Capture One Pro 6 terminology) are shown below.  I selected and exported all the photos with 5 stars. 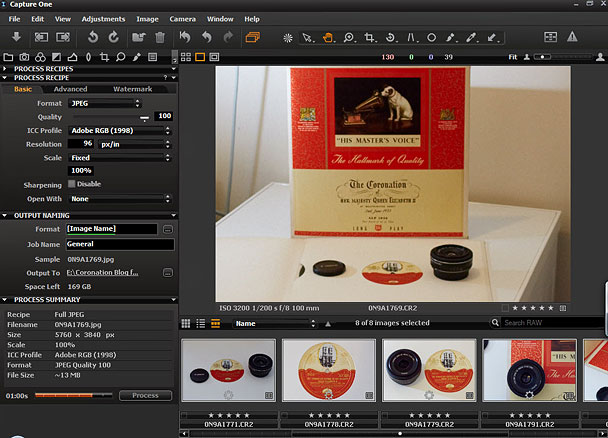 By the way, RAW is not an acronym.  It is just the word “raw” captitalised to indicate a particular type of file by whatever extension it has according to the camera manufacturer.  There is a very good article about it HERE .   My Canon 5D Mark III RAW files have the extension CR2.

The next step in my workflow is to use my Directory Opus file manager to check out the folder to which I exported the chosen RAW files as JPEG files.  I used Directory Opus on my Amiga from when it was first released (about 1990).  It’s a Queensland software product, and what sets it apart for me is that it shows RAW file images. 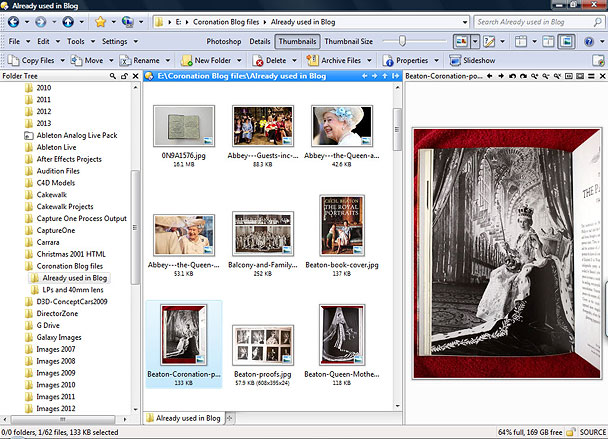 The above screen grab is not how Directory Opus looks.  It is only I set it up for the screen grab – and it was very quickly and easily done.  The entire display and what the program can do can be customized.  In the above example I have displayed thumbnails of the files and added a viewer pane for the file selected.  If the file selected was a PDF file, it would show the contents of the PDF file in the viewer pane.  The same for Microsoft Office files (Word, Excel, etc), for music files it opens a QuickTime music player, and it blows me away when I click on a video file – I’m instantly re-sizing the pane to make it bigger.

The next step is when I’m working on a post.  I go into Directory Opus and select the image or images I want to insert at that point, and switch to Directory Opus, select the image and click on the Photoshop button in the middle toolbar to open the image in Photoshop.  It opens Photoshop if it is not already open.  Then I process the image for use in the post.  It is all so fast and easy to do.  I created the custom button commands for Photoshop, Details and Thumbnails (note that it has a Thumbnail Size slider next to it) because are the ones I use all the time, and just clicking on a button is a much faster and more efficient workflow.

One photo in the slider above shows my Canon EF 40mm f2.8 ETM lens with its cap off, against the background of one of 3 LP albums of The Coronation service.  I’ve used the album to show how small the lens is.  For any reader unfamiliar with LP packaging, most album cover were sleeves from which you could pull the LP out from the side.  HMV chose to use this type of album for The Coronation set, perhaps to emphasize the significance of the event, and perhaps also to show off the label on the LP.   You can see the rim of the LP to the left of the lens cap.   LP records were 12 inches in diameter (“microgroove” records as they were known when they first came out, also initially came in 10 inch recordings).  The distance from the rim of the 12 inch LP to the spindle hole in the centre of the disk (and its label) is of course 6 inches – so that gives you some idea of the size of the lens and its cap.

That photo and the rest of the photos in the slider were taken with the Canon EF 100mm f2.8 IS macro lens on the Canon 5D Mark III.

Now back to photos taken with the 40mm lens – which made it so much easier to take photos of books and magazine pages and spreads from overhead without having to stand on a ladder to do it.

A few years ago I bought from Amazon.co.uk the CD recording of the Coronation ceremony.  It fitted on 2 CDs compared with the 3 LP record albums, each with 2 sides.  Times have changed.

I’ve put the open CD on top of the magazine featured in my “The Day” post to give you an idea of the size of The Illustrated London News weekly magazines. 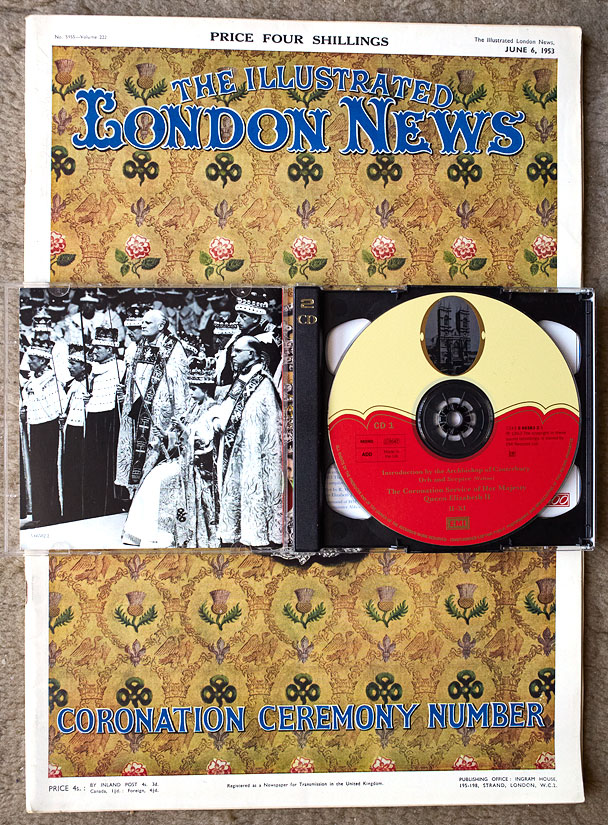 And finally, my second slider.  This time it’s a featured image slider.  As with the lightbox slider above, I’ve made it manual, so that it won’t start changing the images automatically when you open this post – otherwise the image you first see would probably would not be as I intended.  As before, there are navigation arrows for you to use.  If you want to go the post concerned, click on the image instead of on an arrow.