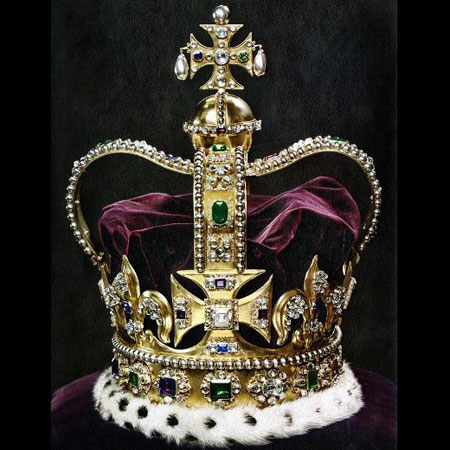 Today, Tuesday, 4th June 2013, the Queen and the Duke of Edinburgh attended a service at Westminster Abbey to commemorate the anniversary of the Coronation 60 years ago.  The service was held not on the actual anniversary date because it fell on Sunday this year.   Twenty Members of the Royal Family attended the service today, including prince Charles who was only four years old when his mother was crowned in 1953.  But today his two sons, the Princes William and Harry, are several years older then their grandmother was when she was crowned Queen.

An article in The Times this morning wrote about the huge amount of security and secrecy surrounding the move of St Edward’s Crown from the Tower of London to Westminster Abbey for the service today.  Here is a photo from a later edition of The Times showing St Edward’s Crown being placed on the High Altar at Westminster Abbey, before the service began. 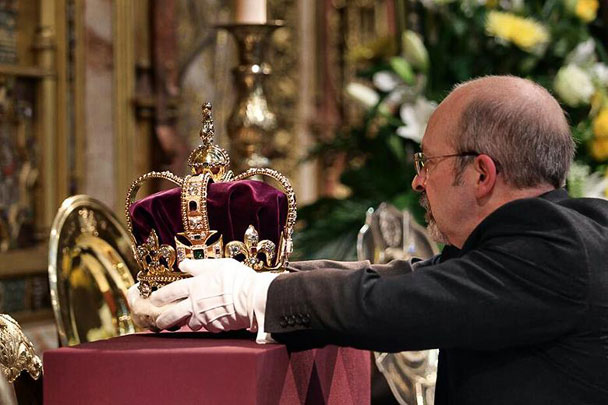 The following is an extract from The Times online this evening.

The Archbishop of Canterbury today praised the Queen’s “utter self-sacrifice” at a service commemorating the 60th anniversary of the coronation.

The Most Reverent Justin Welby told the 2,000 strong congregation at Westminster Abbey that the Queen had given “sixty years of commitment” since she first started on the “path of demanding devotion” on that rainy June day in 1953.

The Queen appeared moved and thoughtful as the Archbishop recalled how, as a young woman, she had pledged her allegiance to God and to the service of her country as she knelt before the High Altar at the Abbey.

Below is a short video covering the service:

Next is a truly superb 15 minute 15 second video of the service:

Finally, the following is the full service – 1 hour 15 minutes including arrivals and departures:

The following photos are from The Times: 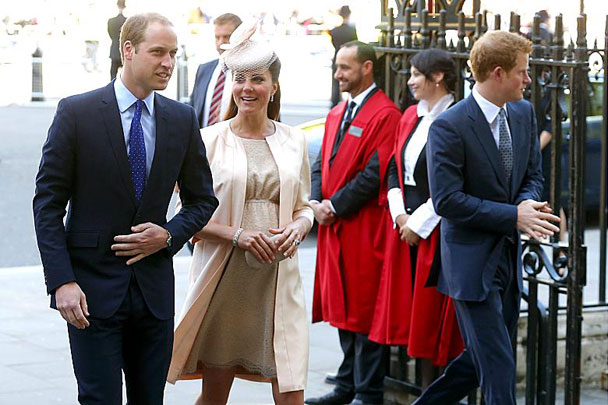 Above: The Duke and Duchess of Cambridge (Prince William and Kate) and Prince Henry (Harry) arrive  at the Abbey. 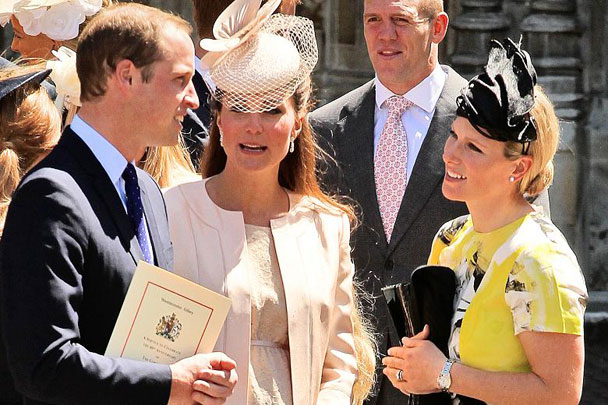 Above:  William and Kate with Zara and Michael Tindall outside the Abbey after the ceremony.  Zara (who is better known as Zara Phillips) is the second-eldest grandchild of the Queen, and like her mother Princess Anne, is an Olympic equestrian.  She won a Silver Medal at the London Olympic Games in 2012, and attended the Melbourne Cup in 2009. 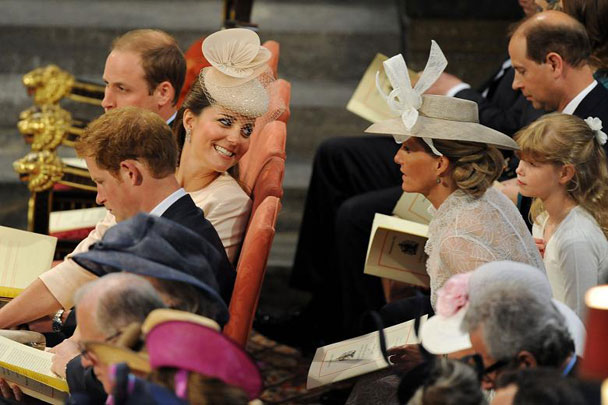 Above:  Kate, seated between William and Harry, is chatting to Sophie, the Countess of Wessex.  Next to Sophie is her daughter Louise, and then her husband Prince Edward, Earl of Sussex.  Or to put it another way, Kate is chatting to her Aunt Sophie (by marriage). 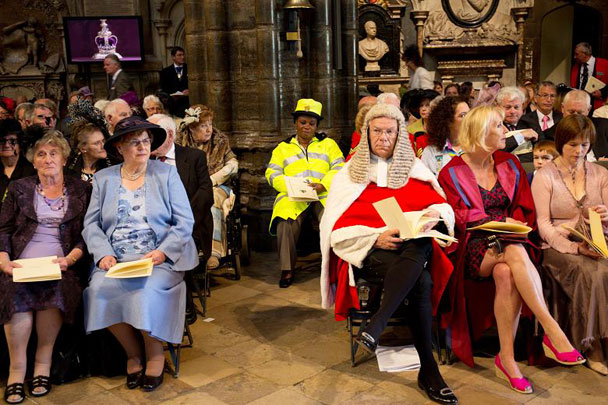 Victoria Adom, a Lollipop Lady (a school crossing patrol officer) is one of the guests at the service.  Here is an extract from The Times:

“Resist the splendour of the spectacle,” said the Archbishop of Canterbury as he began his sermon at Westminster Abbey to mark the 60th anniversary of the Queen’s Coronation. And while it may have been spiritually instructive advice — he wanted the congregation to focus on the deeper meaning of the Coronation — it was hard to follow.

Choirs, trumpeters, nearly two dozen members of the Royal Family, the majesty of the Abbey itself, where, resting on the High Altar, was the St Edward’s Crown, back for the first time in 60 years: it was not easy to resist the splendour of it all.

But amid all that grandeur and ritual, solemnity and soaring music, there was one piece of theatre that caught the eye, a strikingly modern moment on an occasion steeped in history: at the centre of it all, a lollipop lady.

Victoria Adom, originally from Ghana, was taking part in a procession that brought the holy oil used in the anointing of the Queen 60 years ago to the altar. There were 11 of them, including a Queen’s Guide, two schoolchildren, a nurse, a peer and a High Court judge, and Mrs Adom in her high-visibility jacket. It was an arresting image.

Mrs Adom, who knew nothing about the nature of the ceremony she had been nominated to take part in by Westminster City Council until she turned up for a rehearsal on Monday, said: “I knew everyone was watching me in that uniform. Everyone was smiling — I don’t know if they were happy to see me or if they were surprised.”

An extraordinary sight, but also a lesson in modern history. In its own deliberate, self-conscious way, that procession was an attempt to sum up how the country sees itself now: inclusive, multi-racial, without class barriers. In short, not a sight that would ever have been seen at Westminster Abbey on June 2, 1953. As Mrs Adom said: “To see a lollipop lady in Westminster Abbey, they were surprised.”

It also amused Prince Philip, who the evening before had been unwell enough to cancel his appearance with the Queen at St James’s Palace. Yesterday he attended not just the service but also the lunch in College Hall. 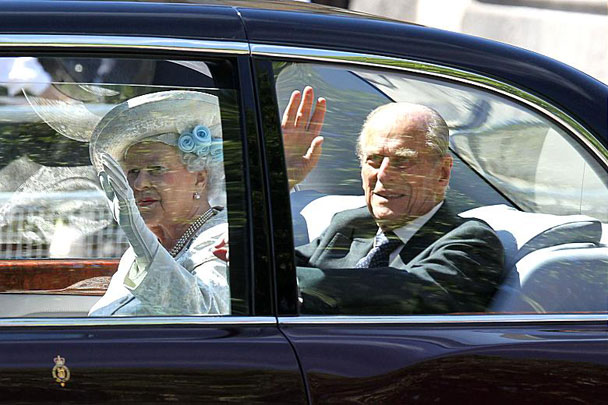 The Queen and Duke arrive at the Abbey in the State Bentley.  The limousine is coloured claret and black as are all the Royal limousines. 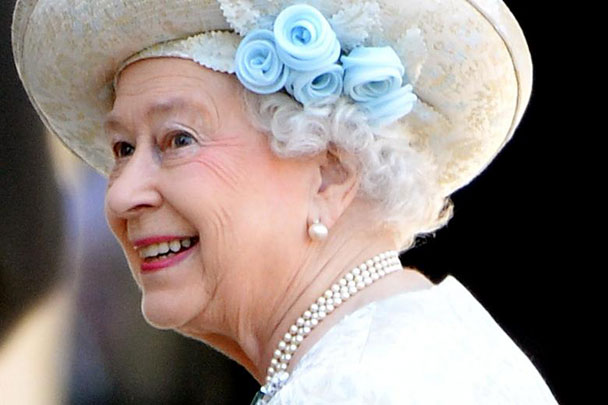 The Queen after she arrived at the Abbey. 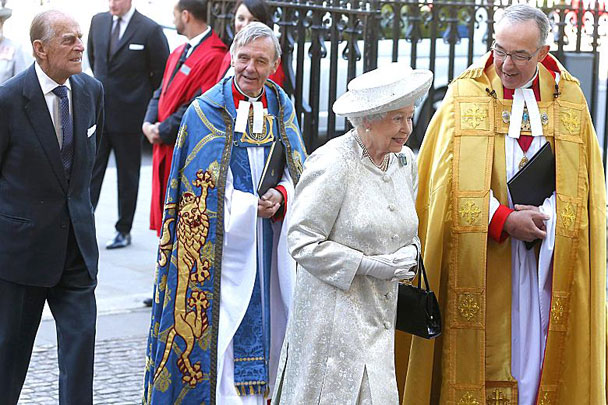 Above:  The Queen and Duke are greeted as they arrive. 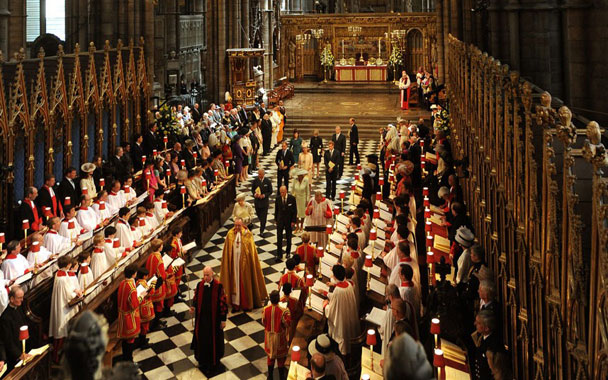 Above:  The procession of the Queen and Duke accompanied by Prince Charles and Camilla.  This photo is from The Telegraph. 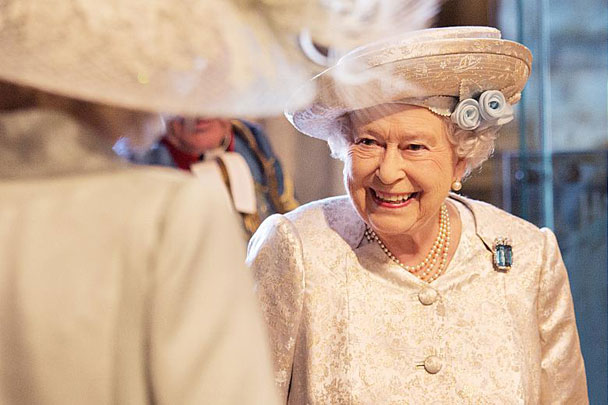 Above:  A photo of the Queen greeting a guest at the Abbey (photo from the The Times).

I’m thrilled that Australia Post decided to issue the stamps, but I’m a little confused by their choices.  The $2.60 stamp is a crop of the original photo, and has an appalling colour cast.  And what is that POST thing doing there?  I’ve never seen it on any other stamp.  By contrast, the 60c stamp is quite a large stamp.  It shows the Coronation Coach with superb colour and detail.  But it is not a photo from the Coronation.  It’s from the Golden Jubilee in 2003 and shows the Coach in front of St. Paul’s Cathedral (not Westminster Abbey) as shown in the photo below, taken a few seconds earlier.  You can see why I know that, if you study the two images and the backgrounds very carefully.  The robes of the Lord Mayor of London holding the sword in the photo below can be seen in the right window of the Coach in the stamp, and so on. 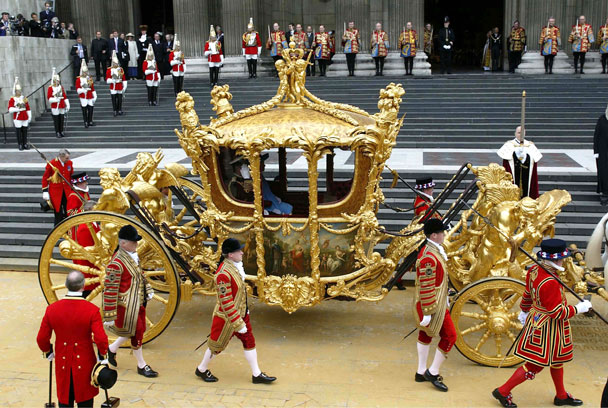