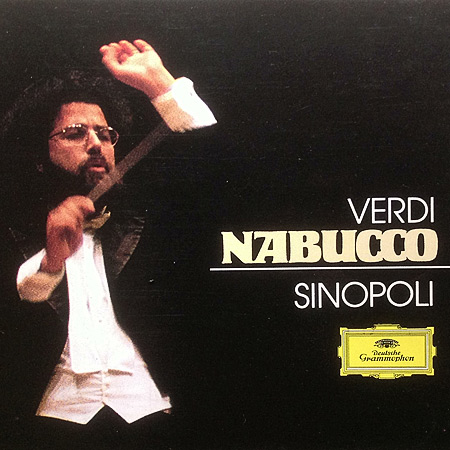 In my last post, about the CD boxed set Verdi: The Complete Works, there is a section headed Nabucco.  Under this I included an image of the cover of the LP set of the opera which I got from the Internet.  Initially I wrote that I’d replace it later with a photo I’d take myself of the cover of my own Nabucco LP  box and its contents.  Well, taking these photos turned into such a photo session that I decided they should have their own post. 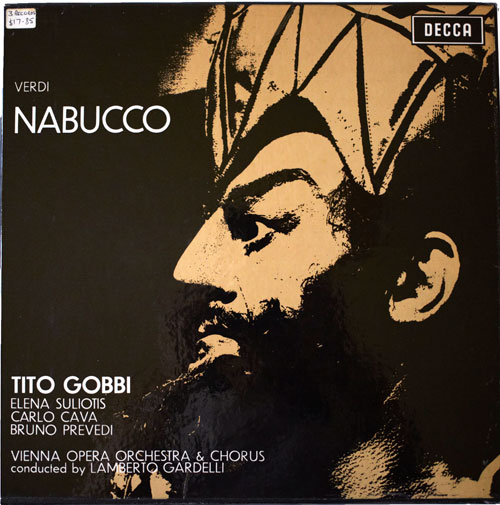 The above photo was taken with my week-old iPad 4.  I bought it on Tuesday, 26 February, the day after my annual check-up at my dentist.  I got a clean bill of dental health – no cavities and no further work required.  I breathed a sigh of relief after I got this report.  It was not only good news in itself, but it also meant that I wasn’t going to have to set big money aside for dental work.  So next day I visited the Apple Store at Chadstone to check out the latest iPad.  The only reason I did this is because Apple has abandoned the original iPad which I had.  The original iPad remains on iOS 5 and I found that more and more of my Apps could not update as they needed iOS 6.  I tolerated this for quite a while, but the straw that broke the camel’s back was when the AFL Live app could not update on February 25 because it needed iOS 6.  That did it for me.  I bought the iPad 4 next day.  While I’m not a footy tragic and don’t support a particular team (although I like the Adelaide Crows) the ADL Live app was a great way to keep abreast of all the games each round, and their results, especially with the worm for each game.  I also had a 2 GB app called Orchestra that I didn’t realise required iOS6 until after I bought it. 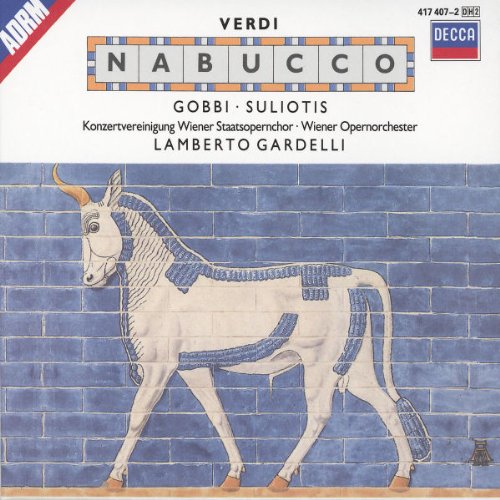 The first photo shows my LP cover of Nabucco with Tito Gobbi and Lamberto Gardelli (conductor).  The image above is from Amazon, and is my first CD of Nabucco.   It’s the same version as my LP set.  When the time came in the 1980’s that I no longer played my LP’s, I bought the CD version.  But I liked Nabucco so much that eventually I bought another version of the opera, this time with Placido Domingo (one of the The Three Tenors) singing. 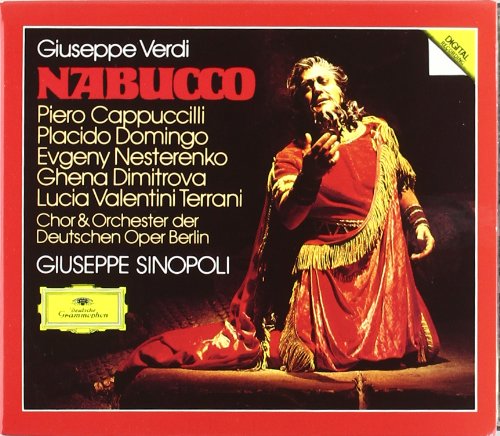 This image is also from Amazon.  I don’t know what I thought at the time when I bought it, but I’d guess that just the dramatic look of the box, and the name Placido Domingo, and the prestigious Deutsche Grammophon label, would have sold me on it.

In 2011 I did buy another version of Nabucco, not part of a collection, that I must confess I haven’t listened to yet.  It does not have any great artists on it, but it does have one claim to fame: 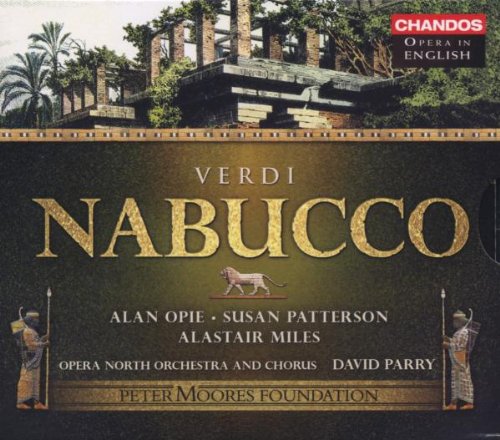 The image above is from Amazon, and possibly you might not see it’s claim to fame.  So I took a photo of my CD box with the iPad and here it is: 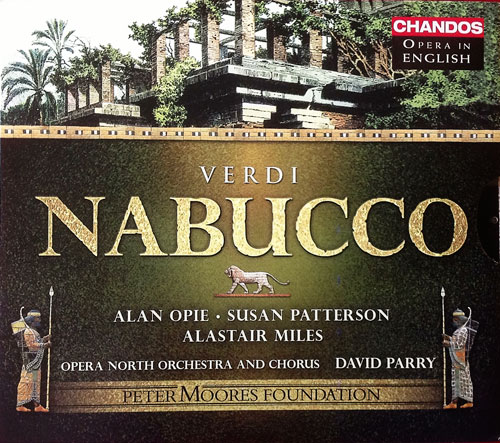 Check out the Chandos label in the photo above.

Years ago I read that many people don’t like opera because it’s sung in a  foreign language, such as Italian or French, and that English people can’t understand what is being sung and the story.   Well, this recording of the opera is in English, instead of Verdi’s native Italian.  So I invite you to see if it makes a difference for you.

You can listen to an extract from this recording  in the audio file below.  It’s the same extract of the opera that I included at the bottom of my previous post.  However, whereas Decca divided this section of the opera into 3 tracks, Chandos divided it into 5 tracks. 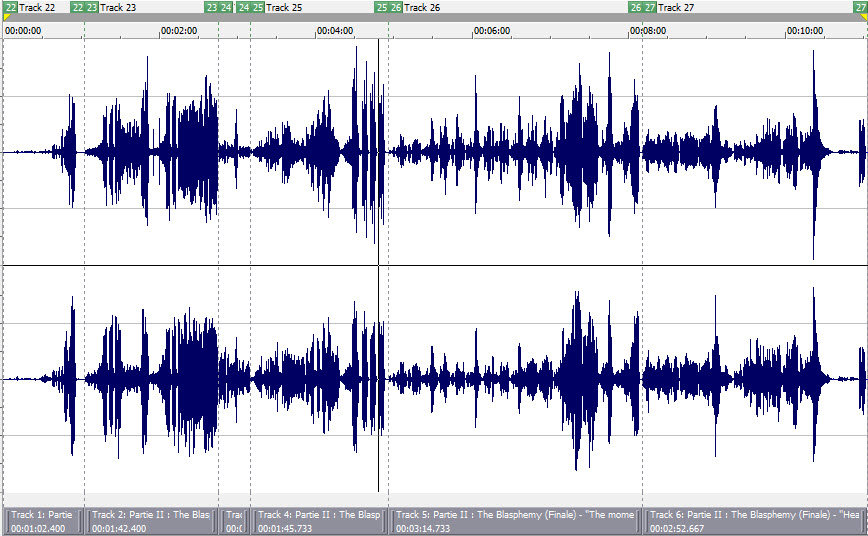 The names of the 5 tracks are:

Who is there?
Woe to the traitor, he is accursed.
Stay your anger, oh, my brothers!
But what means this disturbance?
The moment approaches of man’s retribution.

This is a quieter recording the version in my previous post, so you might need to click on the volume level on the left ot the player to bring it up to full volume.

The LP box comprises 3 LPs and a booklet. 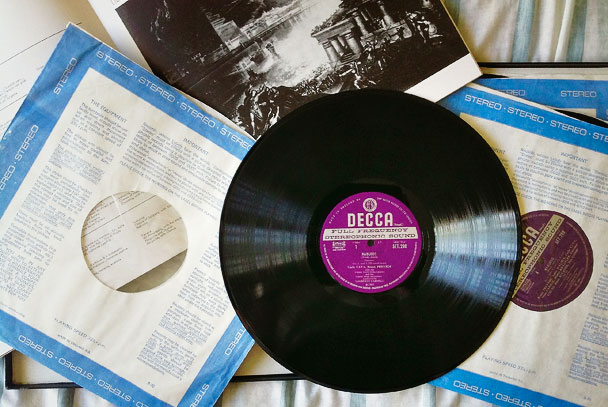 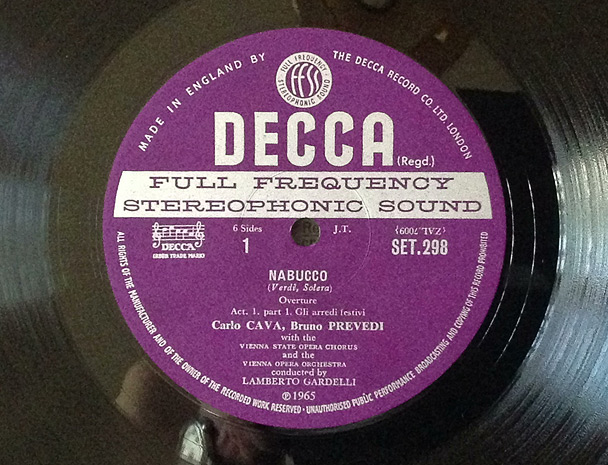 In the photos at the top of this post the LP box looks the same size as the CD boxes.  The following photos were taken to show the difference in their sizes. 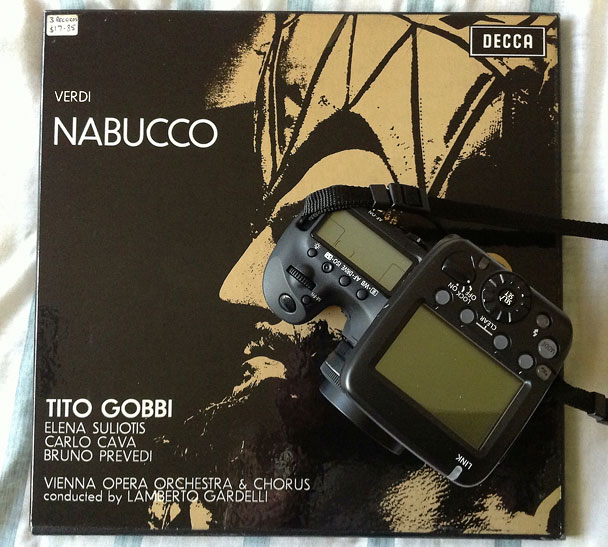 The above photo shows my Canon EOS 5D Mark III on top of the LP box.  The camera has the wireless remote control attached and the lens is barely visible because it’s the Canon EF 40mm pancake lens.  The photo was taken with my iPad 4. 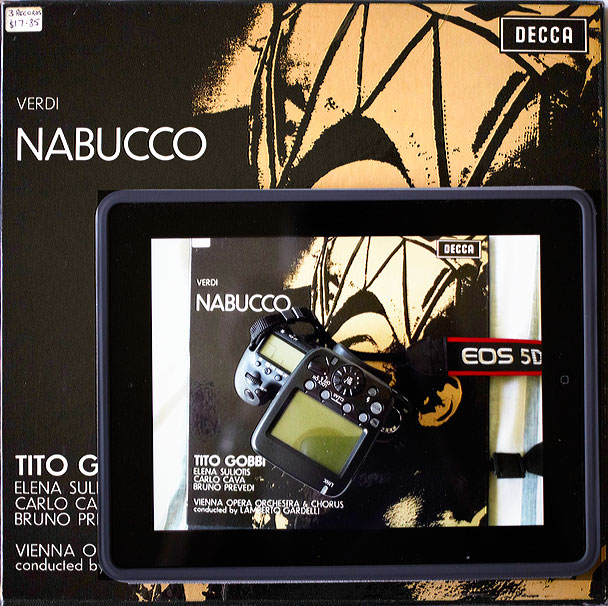 The photo above was taken with the Canon EOS 5D Mark III with the 40mm pancake lens (it cost $189 with RACV discount at Ted’s Cameras at Chadstone).  I bought it the day after I sent my F2012 48 page tax details to my tax agent after working on it for a year, on and off.  The purchase was a celebration.  The photo shows my Nabucco LP box again, with my iPad 4 sitting on top of it, and the iPad screen shows one of the photos I took with the iPad 4.  The photo was taken much later than purchased. 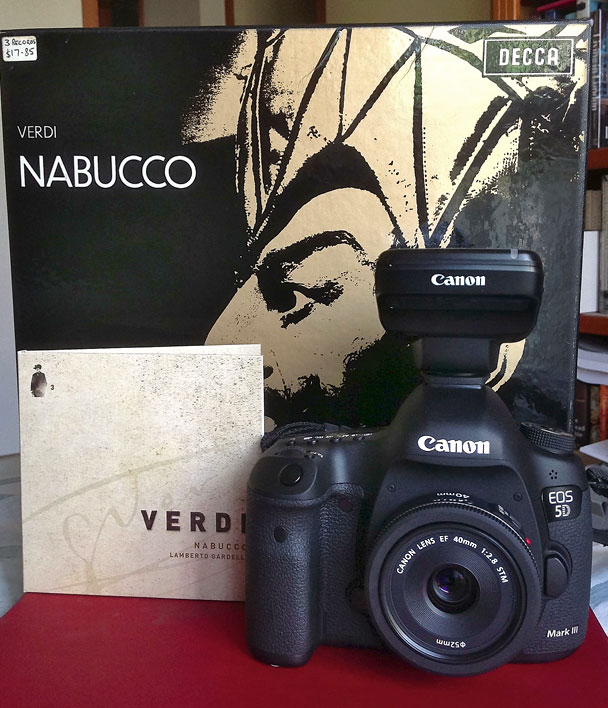 Fnally, a photo of the Nabucco LP box, with the Canon EOS 5D Mk III with 40mm pancake lens and wireless flash transmitter, and the Nabucco CD album from Verdi: The Complete Works.

I should set the record straight here.  Apple does not call its latest iPad the iPad 4.  It is simply called iPad.  But it is also called iPad with Retina Display, and it’s the 4th generation iPad.  When I complained at the Apple Store at Chadstone, that Apple had stopped supporting the original iPad (it’s only a 2010 device) I was told that it doesn’t have the power to support iOS6.  For a start, the latest iPad is quad core, can shoot HD video, and has lots of other great features, and is thinner and lighter than my old iPad.

Whatever the case, I’m very impressed by the photos my new iPad 4 can take.  The most outstanding thing is the extraordinary depth of field at such close range.  The feature image for this post was taken with the iPad 4.  It’s the cover of the Sinopoli version booklet.   The CD box is shown above with it’s strong red accents.