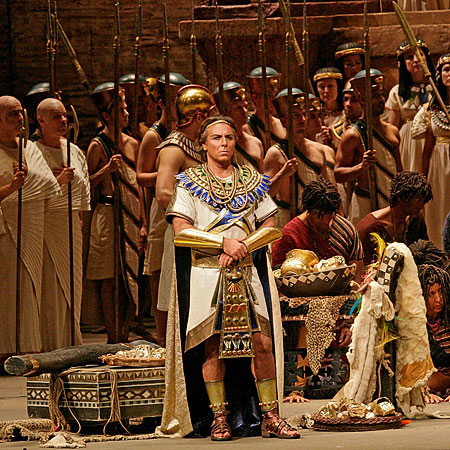 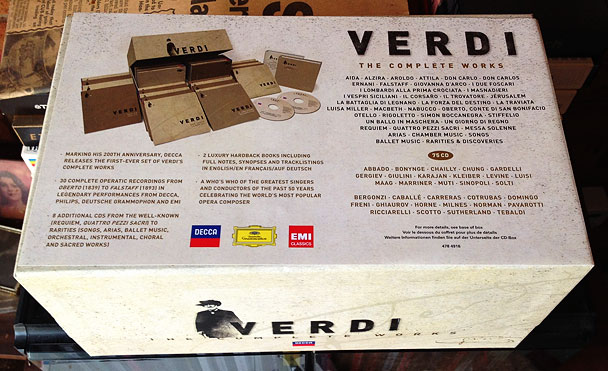 I have to admit that I’m a real sucker for big collections of classical music CDs, especially if they are of composers, conductors, artists and musical genres.  Or even of a nostalgic recorded music period in my life when RCA Living Stereo and Mercury Living Presence recordings in the years when stereo first came out, and many recordings demonstrated ping pong balls left and right, trains going past and so on.  It was magic in its day.

In my childhood, teenage years and early 20’s I was not a fan of opera, except for operatic arias sung in movies like the Marx Brothers movie A Night At The Opera, and The Great Caruso starring Mario Lanza.  I saw all of his films and loved his singing, and I even bought the LP soundtrack of  the film he was never in – The Student Prince – before the movie came to the Odeon at Mount Gambier, where I lived.  In the movie, Edmund Purdom mimed to the singing of Mario Lamza (who the studio thought was too overweight to play the part of the young prince).

Way back in 1965 I saw Joan Sutherland in Lucia de Lammermoor by Gaetano Donizetti at a theatre in Adelaide.  It blew my mind away.  She was stunning in a way that I had never thought possible or expected.  And if any non-opera fans are reading this, I must confess that for a lot of the opera all I could see in Dame Joan was a Sydney typist on the stage.  I was even a bit bored.  But when it came to the famous Mad Scene, I was excited and spellbound.  I couldn’t believe that what I was hearing was possible.  Dame Joan seemed to turn the whole stage into an echo chamber with her voice and repeated trills (like echoes).  It was magic.  I become a fan of Dame Joan forever.  I also saw her in several concerts in Adelaide in later years, with her husband conducting.

Here is the Mad Scene with Dame Joan in the 1986 performance of the opera at the Sydney Opera House with Opera Australia.  To appreciate it you need good sound and stereo. If you don’t have a good computer sound system with external speakers and sub-woofer, then at east get some good headphones. And to appreciate it you also need to watch the whole video, or listen to the whole track on a recording. It builds up slowly from a very quiet start, and for a while it seems that nothing interesting is going to happen.  Then at the 3 minute mark it starts picking up, and even more so shortly after the 6 minute mark.  Eventually she hits it at 11.21 and reaches the point where I was utterly sold.  By the way, the performance of Lucia de Lammermoor in Adelaide, back in 1965 was with Luciano Pavarotti.  He was not well-known at the time, and this tour proved to be a major milestone in his career.

This probably sowed the seeds of me gradually becoming an opera fan about five years later.  The first opera I ever bought was  Giuseppe Verdi’s Aida, on 12 inch stereo LP of course, the latest in technology.  Back then, in 1972, my Mother was still alive and though not an opera fan, she enjoyed listening to many of the arias in Aida.

If you’d like to see or listen to all or parts of Aida, a theatre performance of the full opera is recorded in this YouTube video:

The next opera I bought was Verdi’s Nabucco.  Again on LP.  I loved it immediately, and still do. There are plenty of excerpts on YouTube, and even the full opera, but I don’t like any of them (and none are from my from favourite version).  I’ve now come to think that Nabucco is an opera I prefer to listen to, and imagine it all myself, rather than see it on stage.  I have included some arias from Nabucco at the bottom of this post.

After that I branched out into operas by many other composers, and in recent years I’ve become very adventurous, and have bought CDs of  many less well known and rarely performed operas, including a recently discovered opera by Vivaldi.

This brings me to the point of this post.  As I mentioned, the first two operas I bought were composed by Verdi, and I have since bought a couple of other operas by him.  But this year will see the 200th anniversary of Verdi’s birth on 9 or 10 October 1813, and to celebrate this, Decca have released the first complete collection of Verdi’s works – operas, arias, songs, sacred works, chamber and piano pieces, orchestral, ballet and choral works, and the rest. 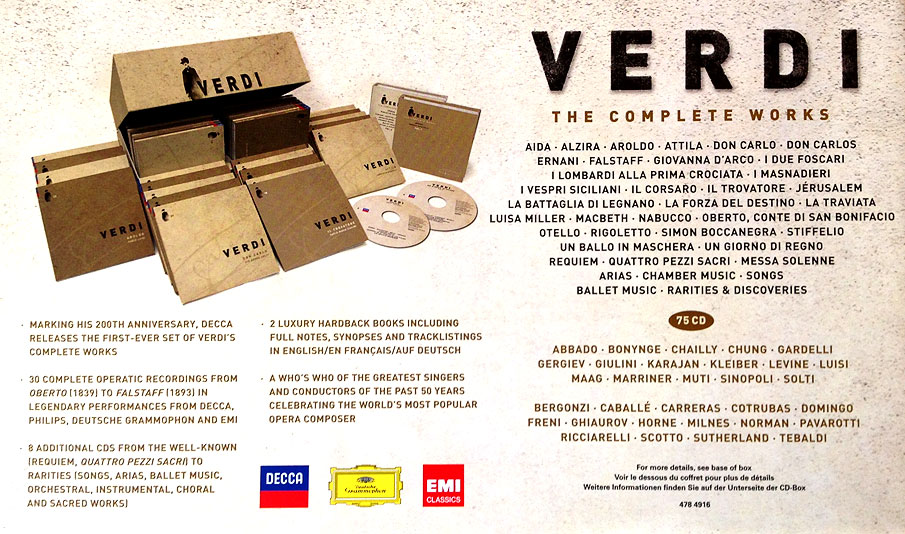 The collection has a brilliant range of singers and conductors as shown on the box.  The operas on the sheet of paper on the top of the box are shown in alphabetical order.

The photo of the box top, and the box, were taken with my iPad 4.  Actually the box top is a printed sheet lightly attached.  In the top photo the sheet is slightly askew which has caused a problem in trying to square up the box in the photo.

The recording of Nabucco in the collection with Tito Gobbi, is the one I bought as a boxed set of 3 LP’s in the 1970’s.  Imagine listening to the opera and having to get up approximately every 25 minutes to either to put on an LP or change to its other side six times during the opera.   Here is the cover of the LP box.  I got this image from the Internet but I’ll replace it in due course with photos I’ll take of my LP box and its contents.  (Update:  My plan to take two simple photos turned into a bit of a photo shoot, so I’ve decided to make a separate post about it.)

This is an action packed opera with few slow or quiet moments, and most of the arias flow from one to the other without a break in the sound.  Perhaps that’s why I love it.  I’ve decided to include tracks 2, 3 and 4 from CD 2 (from Act 2).  Here’s the sound wave of the range of three tracks of audio I extracted from CD 2 using Sony Sound Forge Pro 10.  I’ve been using Sound Forge since the days when Sonic Foundry created it. 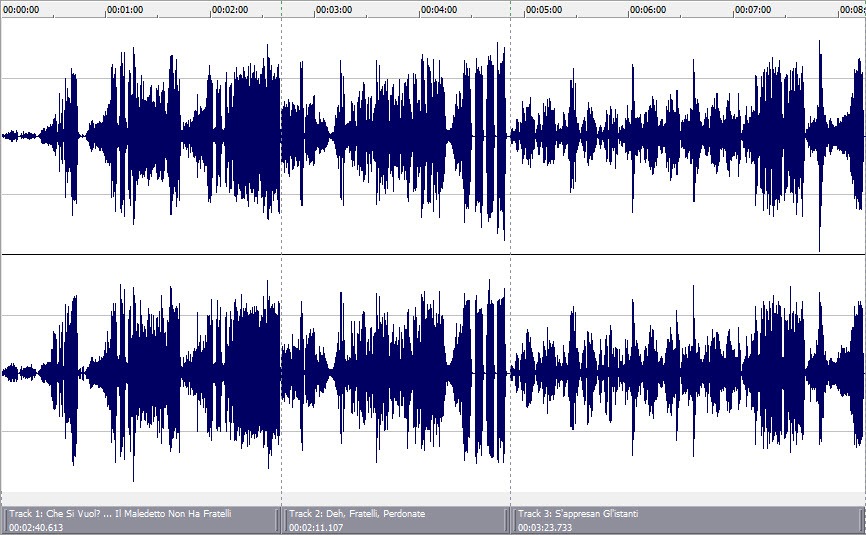