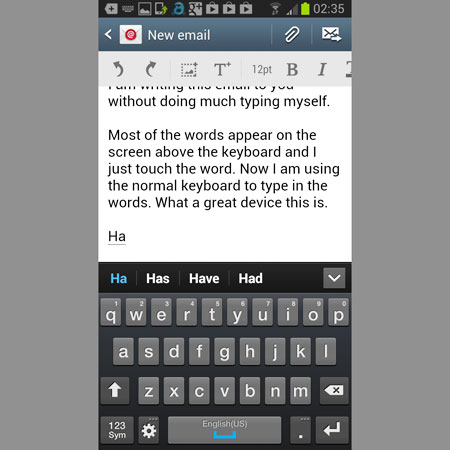 The Featured Image for this post is a screenshot of the Samsung Galaxy S III keyboard in vertical mode, in the Email screen.  Note the sliding row of text format options at the top.  The keyboard is significantly different to the iPhone keyboard in a number of respects.  On the alphabet (ABC) view the top row has numerals in small print.  If you tap, say, the o key it types an o, but if you hold it down you get options such as 9, ò, ó, ô, õ, ö, ø and œ.  There is also common punctuation keys on this screen if you hold down the full stop key.  If you tap the 123/Sym button at bottom left you not only get numerals and punctuation but 3 screens of symbols.  As you type a word the keyboard tries to predict the rest of the word, and the suggestions show in a row above the keyboard.  If you tap on a suggested word it replaces the word you are currently typing with the complete word, and will put a space after it unless you add punctuation.

To put this in context, I don’t use my iPhone or iPad to write emails.  I’m not one of those young people who can text or write emails at high speed using both thumbs.  Firstly, I’m not as agile to move my thumbs at that speed, and secondly, I’d probably hit any of 9 to 16 keys in the area below each thumb.  I have enough trying to hit the key I mean to hit when using just my right index finger which is as wide as 3 keys.  Worse still than writing emails, I find it difficult to reply to the odd Text Message I get.

So the real question for me is whether the Galaxy S3 (to use a common abbreviation for the phone’s name) keyboard will make it easier to write an email, reply to an SMS message, or makes notes.

In my limited experience with the Galaxy S3 which I haven’t had for 2 weeks yet, the keyboard interests me, but so far I haven’t found it to be of much real help.  It seems that I mostly have to be well into typing a word before it will come up with the right suggestion for the word I’m typing.  I suspect that it actually slows me down by keeping an eye on the suggestions instead of typing as fast as I can.

A major difference between the iPhone/iPad and the Galaxy S3 is that Apple controls what apps can do with its products, and it doesn’t let apps play with the basics, such as the keyboard.  By contrast, the Galaxy S3 is Android based, and the Android apps offer alternative keyboards.  And that is what this post is about.

The SwiftKey 3 does far more that suggest the word you are typing while you type it.  It also suggests the word that might come next, and so on, and this is where it can save time and typing.  It costs AU$3.99 to buy, but I have it on a month’s free trial.

Here are two views of its keyboard.  The first view is upper case, and you can see what is available just by holding the key down: 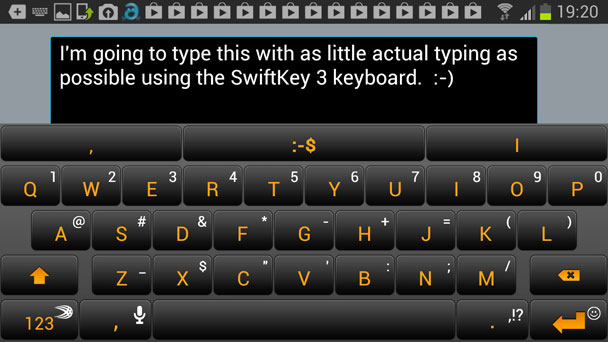 and here is another view: 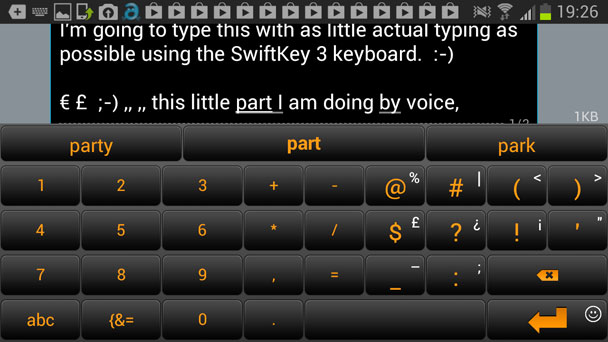 Adaptxt  is another app that tries to improve on the standard keyboard.   It’s worth a try as it’s free, and it not only completes the word you are writing but  also predicts what your next word might be.  Oddly, its demo video is about screen colour customization.