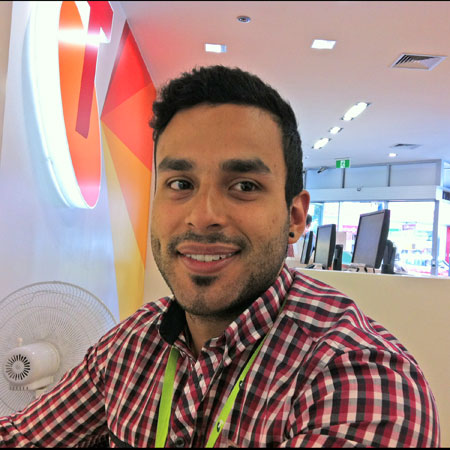 I’ve been using an iPhone for over 4 years now. I bought my first, the iPhone 2, from the Telstra shop at Chadstone in November 2008.  In late 2010 I took out a new 2 year contract at the Bentleigh Telstra shop to upgrade to the iPhone 4.  I’ve been thrilled with iPhone since the day I first bought one.  It’s just so much easier to use, and more useful than the old mobile phones that I had in my work years and the first 6 years of my retirement.  The most obvious advantage was that by connecting the iPhone to my PC and opening iTunes, I could synch all my Outlook contacts, notes, and calendar details to the iPhone.  This was the first time I’d had a mobile phone with all my phone numbers on it.  And it had apps, and they quickly became the main reason I loved the iPhone and use it every morning to check the weather, my emails, and do some crossword clues.

However, in the past month, the Home button often takes several pushes before it works, and sometimes it doesn’t connect to my home Wi-Fi network and uses Telstra 3G instead. Because of this, last Tuesday I called into the Telstra shop in Bentleigh to see if they could help fix the problems.  I got great service straight away from Heber (shown in the Featured Image).

I explained the problems to Heber, he checked out my contract and found that it had expired last year, just as I thought it might have, and said that by renewing the contract I could get a new phone.  He said I could upgrade to the iPhone 5, but explained why he prefers the Samsung Galaxy S III, which he has, and then went on to demonstrate it.  I won’t go into all the details but the basic ones are that the Galaxy has a 2 year warranty, an easily replaceable battery, and you can buy the cheapest 16GB model and if you eventually need more memory you can buy a memory card and fit it to the Galaxy yourself, just by lifting off the back.  And it has a bigger screen that the iPhone.  By contrast, the iPhone warranty is for only 1 year, the iPhone battery is not replaceable (if it dies, that’s it), and the iPhone’s memory cannot be increased.

I’m not sure if it was Heber’s Latin charm and his clear conviction about the Galaxy S III being the better choice, or that my friend Colin switched from his iPhone to a Galaxy Note 2 last month, or that I’d read that Samsung now had surpassed iPhone sales, or perhaps that I was impressed by the Galaxy and the idea of a change – and that bigger screen.  But whatever the reason, I walked out of the Telstra shop with a new contract and a new Samsung Galaxy S III – with a long learning curve ahead of me.

The Galaxy is now my mobile phone (and has the SIM card, however, the iPhone is still a very useful device and it has all those  apps that I still use every day – although sometimes it fails to connect to the Wi-Fi.  I don’t plan to add many Android apps to the Galaxy above what it already has.

However, I have bought a couple of Android apps for the Galaxy that provide useful information in a different way to the iPhone or iPad apps I have.  A weather app and the Merriam Webster Premium Dictionary.  The weather app is now my main source of reference to the weather forecast for the day, because it shows a graph of the forecast temperature and chances of rain for the next 24 hours. 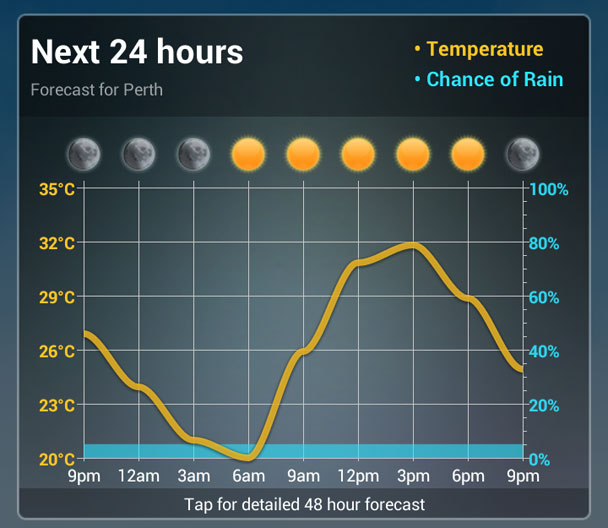 The above partial screenshot shows the Perth WA forecast for the next 24 hours shown as a graph.  At the top you can see a guide to sunrise and sunset times (WA does not have daylight savings), and it shows it will be a clear night and a sunny day.  The legend at top right explains the information in the graph.  In this case the chance of rain in Perth is a constant 5% during the period covered.  I think this means that there is little chance of any any rain, possibly somewhere in the whole Perth area there could be a bit of rain or drizzle. 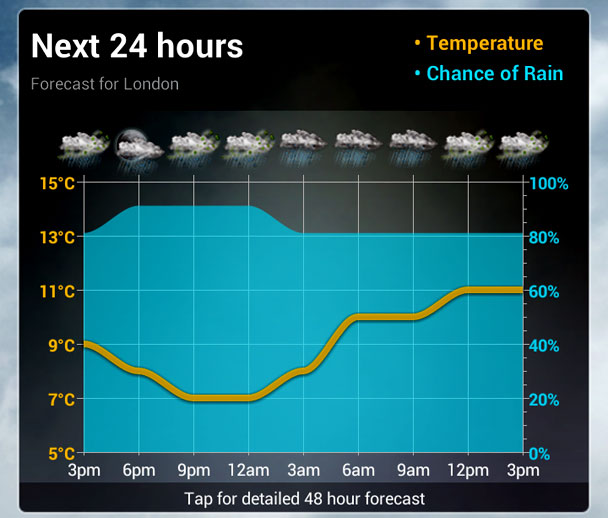 The above image shows the graph for the next 24 hours in London.  What a difference in outlook from Perth’s.

I should mention that this App is also available for the iPhone.  But I would never have looked for a new weather app if I had not changed my mobile phone.

Over the long weekend I began exploring some of the Apps that come with the Galaxy.  One was Google+ and I had no idea to what to expect from it, as I’d never heard of it.  So I just poked around a bit and was stunned to come across the following photo.  I was so surprised and amused that I’ve decided to show it. 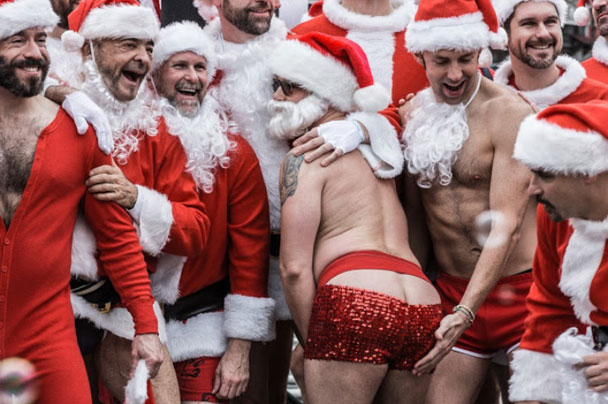 The Galaxy with its Android Apps has one major advantage over the iPhone/iPad and the Apple Store in iTunes.  If you buy an Android App and find that it doesn’t live up to its hype, or isn’t what you expected or wanted, you have 15 minutes in which to press the REFUND button and the App will be automatically uninstalled, and you will either get a refund or not be charged (if the charge has not yet been made).  I’ve tried it to make sure it really happens, and it does.

However I’ve since read that the Galaxy S IV will probably be  released in April 2013, with specifications that will amaze.  Far better than the HP computer I’ve been using for over 5 years – such as an 8-core processor and 1080 x 1920 pixel display and 1080p HD video – 1920 x 1080 pixels widescreen in horizontal mode.