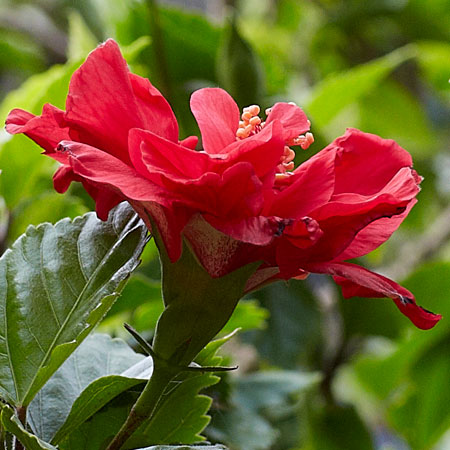 I‘ve now had my Canon EF 85mm f1.2L II USM lens for almost four weeks.   Before I decided to buy it, I’d read that it takes a lot of practice to be able to use it well, but in the hands of a good photographer the results can be stunning.  I haven’t got to that stage yet where my photos are stunning, but I think I’m improving.  This post is designed to show that I’m now getting better at taking sharp photos with the lens.  In most cases I’ll show the full photo, and then show a crop from the full photo.

I’ll start with the Featured Image for this post.  The Featured Image is the square photo shown on the Home page for each post.  The image for this post seems to be a close-up of a hibiscus flower, but it’s actually a crop from the photo below, which shows the full coverage of the photo.   The red flower in the centre is what I focused on using small spot focus and spot metering on my Canon EOS 5D Mark III. 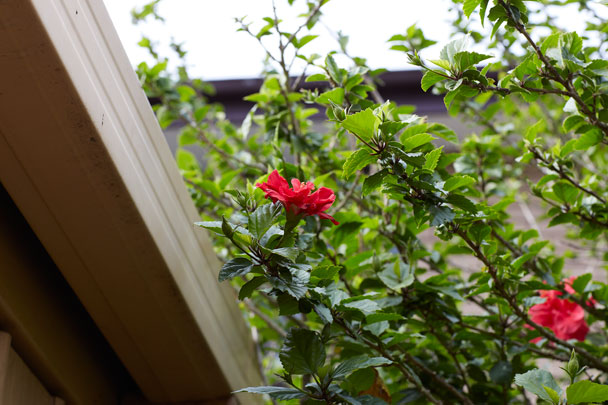 Next is a 100% crop from the full size photo.  That doesn’t mean it’s 100% of the image.  It means that I opened the original photo at 100% in Photoshop and made a crop from the image at that size.  Of course, with the original opened at 100% only a small part of it is visible on the monitor. 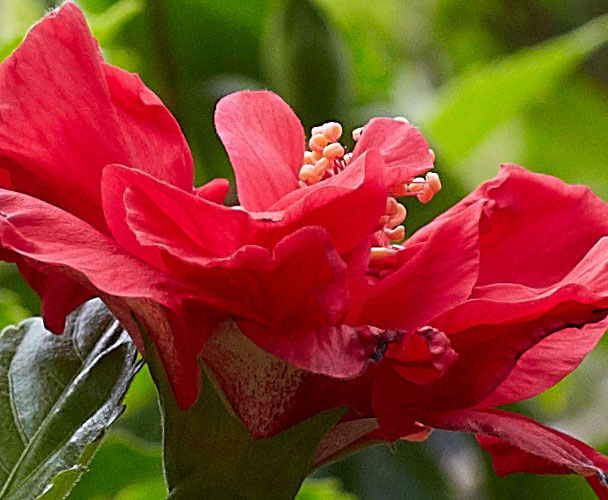 Next is another 100% crop from photo displayed at full size, this time a little to the left and a little down to the flower: 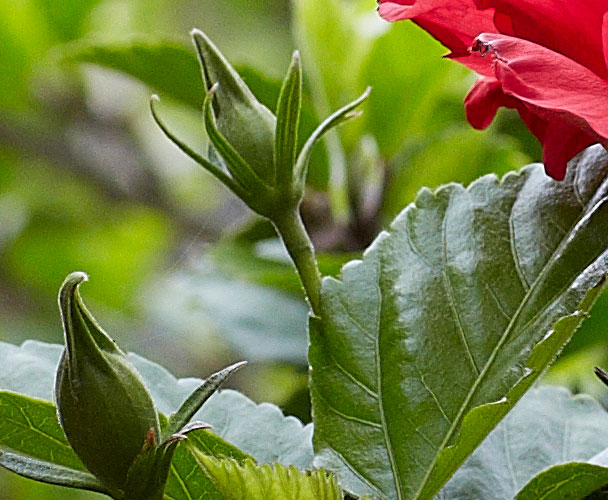 The above two images show how sharp (or otherwise) the original photo is when seen at 100% size.  In this case at the point of focus.  The 85mm lens has very pleasing bokeh (quality of out of focus blur), in my opinion.  Many camera and lens enthusiasts, me included, often check out photo websites looking for examples of photos taken by lenses they’re interested in, and download images at 100% when available, to examine the quality to see how sharp or soft the lens is.  It’s called pixel peeping.

If my explanations of 100% crop are clear enough, you will realise that the crop below is not from the image at 100% as it would not be possible to fit so much in. 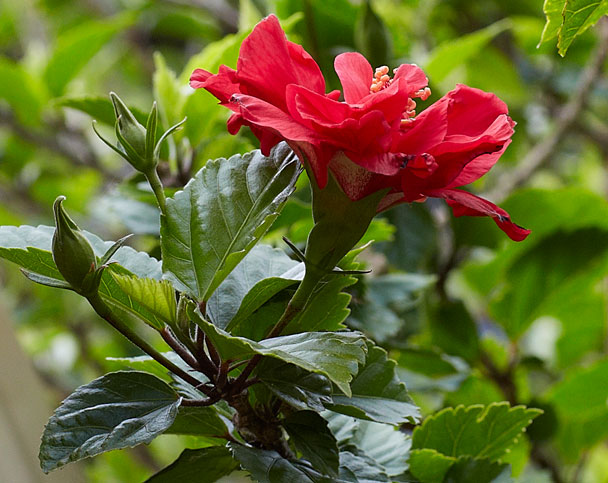 The next image shows another flower in the centre (at spot focus and metering points), pink this time.  To its right and mostly hidden, you can see the red flower shown above.   It show the full coverage of the original photo.  It’s not a glamour shot, is it.  But when I took it with the 85mm lens I had high hopes of being able to turn it into something better by cropping. 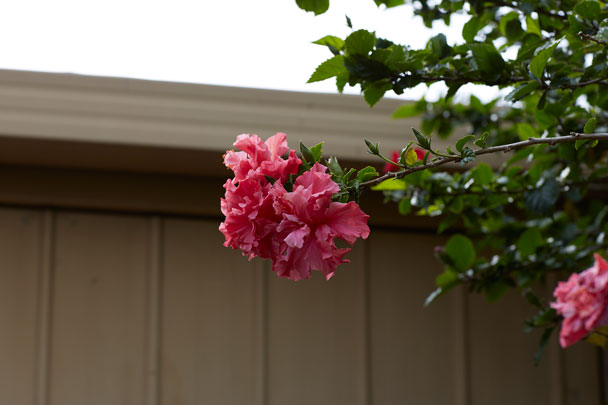 Next is a 100% crop from the original image shown above: 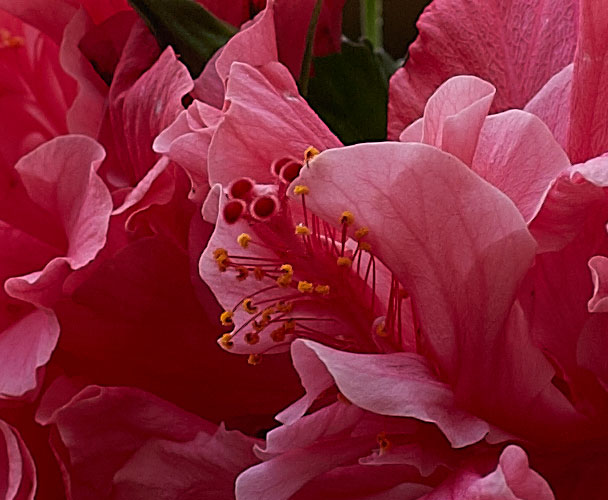 If you wonder where the above image was cropped from in the original photo, follow the line of the stem to centre of the flower.

The next photo is a crop from a flower growing in the border alongside my driveway.   The bokeh of the 85mm lens comes into its element in this image.   The background detail a metre away has disappeared. 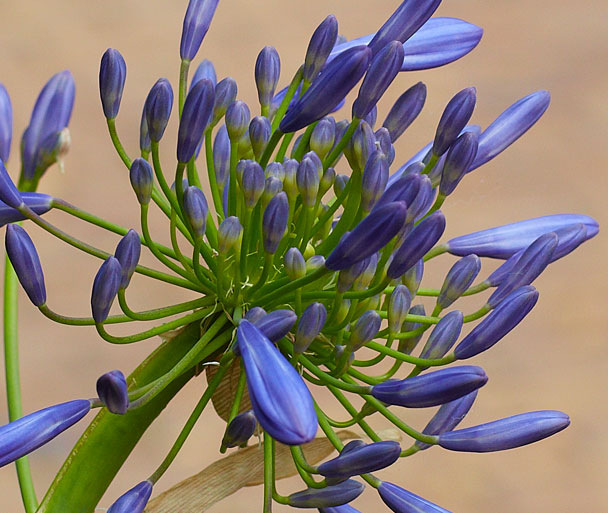 Once again, the following image is a crop, and I’ve included it to let you judge the quality of the lens for yourself. 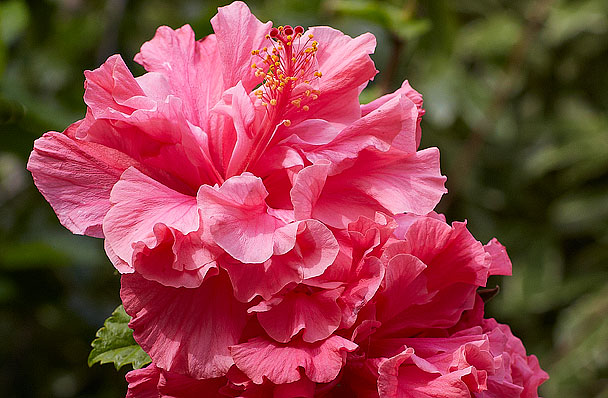 The next photo was taken looking over the wall between my unit’s front area and the driveway of the unit next door. 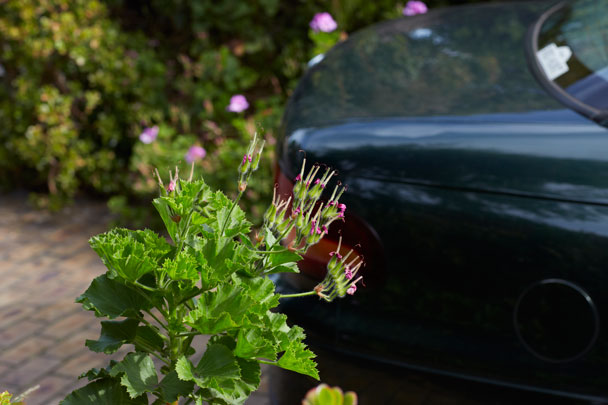 For my money, and I mean that literally, the above photo alone has justified my purchase and relieved any doubts I’ve had about whether the lens is sharp.  Take a look at the photo, and the quality of the bokeh behind the plant I focused on.

The next image is a crop from the above photo. 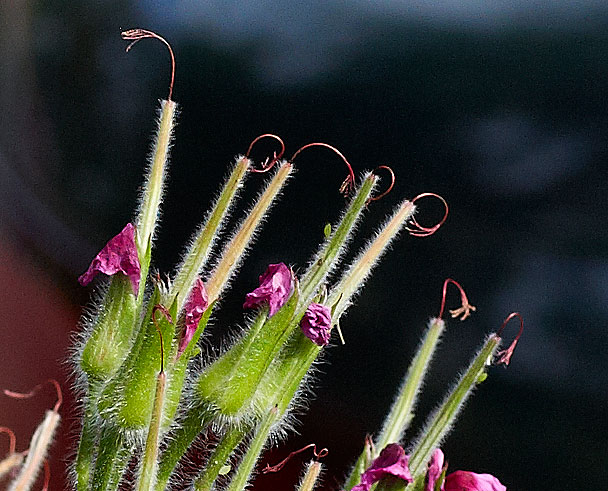 Finally, here is another photo shown at its full size coverage.  My focus was not on the  flowers, but on the buds, leaves and stalks behind the flowers.   It was more a technical exercise than anything.   As you can see, the background is over-exposed and some parts of the flowers are so over-exposed they are washed out. 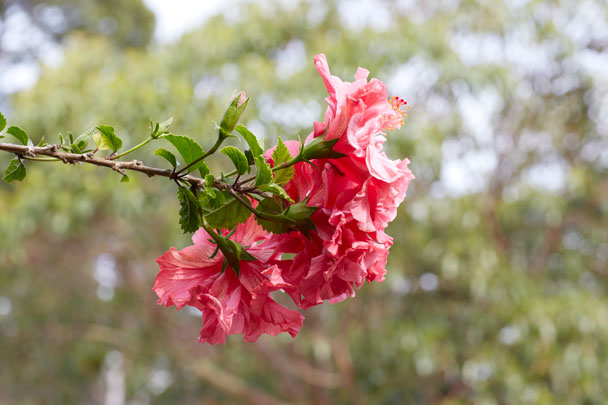 But the exposure and metering were based on the buds, leaves and stalks.  The crop below without any adjustment shows how accurate the Canon EOS 5D Mark III spot focus and metering is. 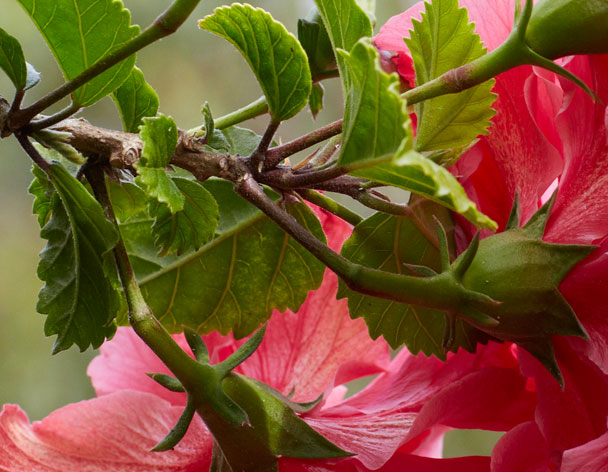 Well, that’s it for this post.  But for a bit of fun, I’ll finish it off with a variation of the above photo in a Photoshop plugin called Nik Color Efex Pro 4.   The image below is a 100% crop of the original photo, treated in Nik Color Efex. 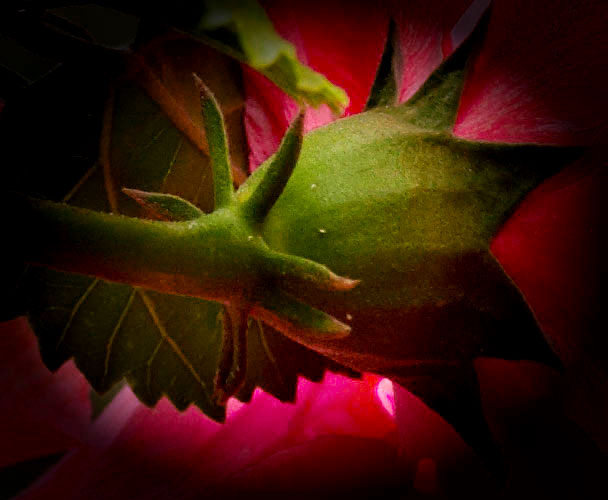