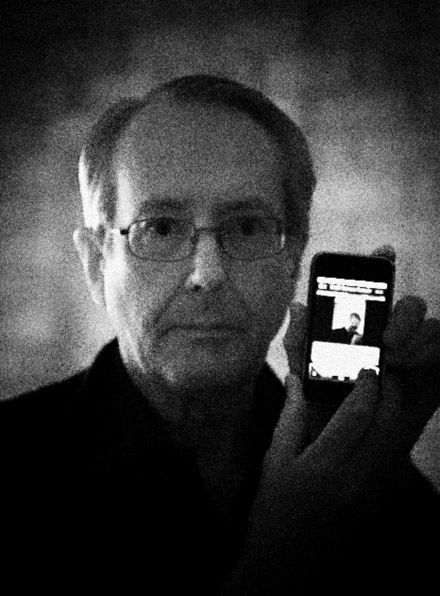 When I got up this morning, all that I had in my plans for today was my routine weekend washing plus two separate washes.  One for a white shirt that I wore to a formal dress lunch on Thursday (I’ve learned from long and sad experience to wash white shirts separately).  The other separate wash was for trousers, which of course needed to be done in a gentle wash on their own.

It certainly wasn’t in my plans to spend any time in the afternoon and evening  taking photos of myself.  Although I have, for several months, wanted to take a new self portrait with my Canon DSLR for use on my website.  But I kept putting this off because of the difficulty of composing a self portrait with a portrait lens, and running to and from the camera to set the self timer going.

The last time I took a portrait of myself was in 2002, the year that I retired and was asked to supply a photo of myself for the company magazine.  So I took that photo with my Canon Powershot G2 – a 2001 digital 4 megapixel camera with a fold out and reversible LCD screen where I could see myself in the screen when composing the self portrait, and it had a little remote control to take the photo.

However, for my new self portrait in 2009, I wanted to take it with my newish 2008 Canon EOS 5D Mk II with a portrait lens fitted.  But it seemed impossible, as I’d have no way of composing or focussing the shot.  The best idea I could come up with was to use a wide angle lens (with a large focus depth of field), then crop the photo to a head and shoulders, and use Photoshop to blur the background, as if it were a portrait lens.

My plans for today were greatly distracted when I checked my emails and found one about an exciting  new iPhone application – a remote control for Nikon and Canon DSLR cameras.  Well, at least those models supported by the application.

After I did all that needed to be done to install the app on iPhone and computer software to connect to the camera, I then gave it try.  I hope to do much better once I’ve gained experience.

The above photo was taken with my DSLR with a 24-105mm zoom lens at the 105mm setting.  The  B&W conversion was created using the Nik Silver Efex Pro plug-in for Photoshop.  I chose a contrasty image with a heavy film grain effect.

Check out the iPhone Apps page on my website for more about this application.