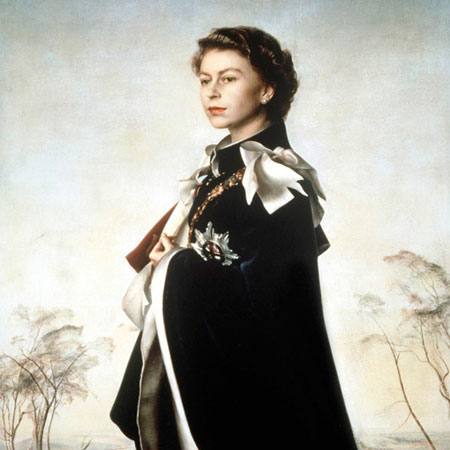 The feature photo for this post is a crop from  the portrait of the young Queen Elizabeth II painted in 1954-55 by the Italian painter Pietro Annigoni.  The painting made him world famous.  The painting is shown below without cropping.  I’m not sure if the colours shown below are true to the paining, as there are number of variations on the internet, some of which are darker.  However, I believe the photo below shows the Order of the Garter ribbons and lining (which are white) closer to real life than the darker photographic reproductions of the painting. 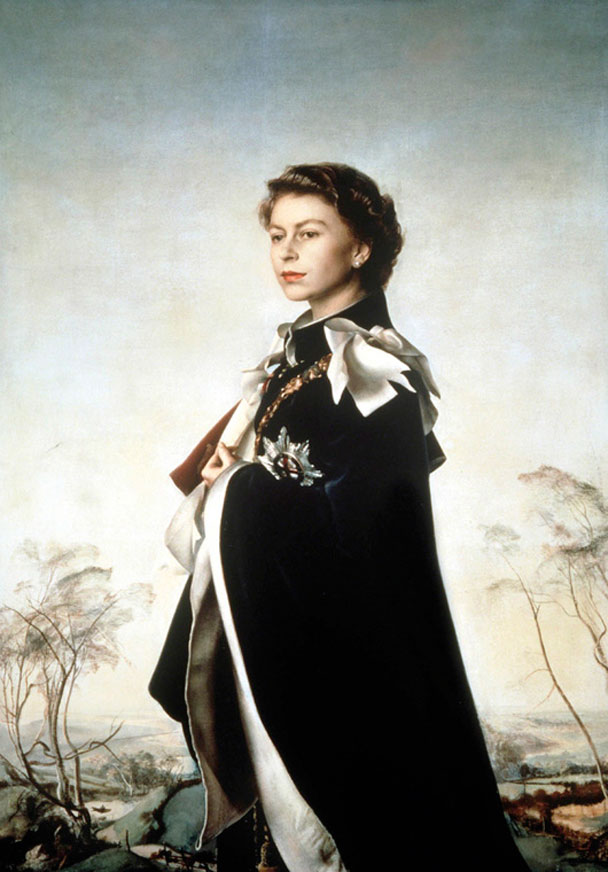 I’ve noticed on some websites that the writer seems to think the Diamond Jubilee celebrates the 60th anniversary of the Queen’s coronation.  That is not the case.  The Diamond Jubilee year celebrates the 60th anniversary of the Queen’s accession to the throne.  Her father, King George VI, died on 6 February 1952 while the then Princess Elizabeth and the Duke of Edinburgh were in Kenya, South Africa, on a their way to a tour of Australia and New Zealand.  Upon her father’s death, Princess Elizabeth immediately acceded to the throne and became Queen, while staying at their lodge in Kenya.  The Queen and Duke cancelled their tour and flew back to London.  The Coronation took place the following year on 2 June 1953.

Now to the Jubilee.

The owner of the following full video of the Diamond Jubilee River Pageant on the Thames, on Saturday, 2 June 2012, has declined permission for you to see it on my website.  So please click on the link in the video to watch it on YouTube.  It’s 3 hours 37 minutes long. The video is superb if you watch it full screen and select 720HD. There may be some glitches in the video or audio. The BBC was criticized  in the press next day for these faults, and for not protecting the camera lenses from rain on a wet day. There is a scene in the video in which the Queen turned to Camilla, it looked almost as a best friend, when a puppet stallion from the hit play War Horse appeared high on the roof of the Royal National Theatre, frolicking and gesturing its greetings.   Did you see that?’ asked the Queen.

Because of the length of the above video, I’ve included three short videos that show parts of the event.

The above video includes part of the Sailor’s Hornpipe as played by the London Philharmonic Orchestra from their barge during The Queen’s Diamond Jubilee Pageant.  The following video shows the whole segment.

The following photos are from The Times (to which I subscribe), taken during the River Pageant. 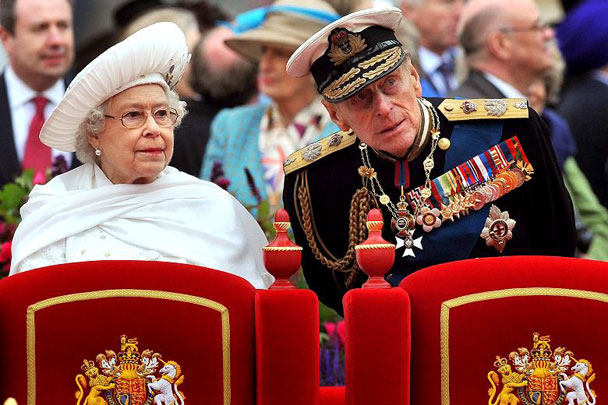 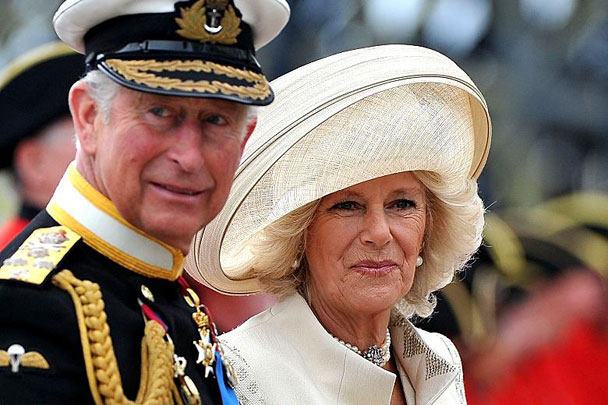 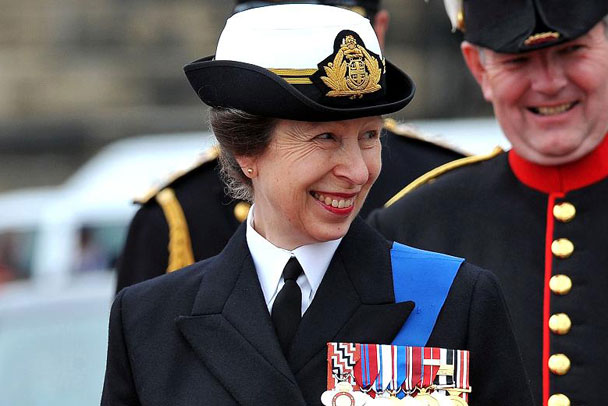 After the Royal Wedding last year,  I have to include Pippa and James Middleton – sister and brother of the Duchess of Cambridge.  Pippa has become quite a celebrity since she was seen on TV in the Royal Wedding last year.  Like her sister, Catherine (Kate) is attractive, and during the wedding TV broadcast many viewers couldn’t help but notice from her close fitting gown that she seems to be quite callipygous. 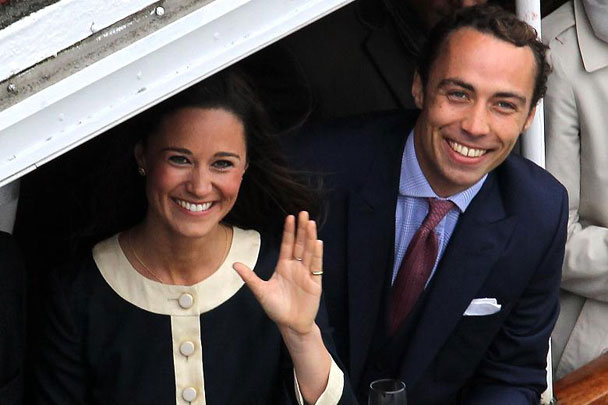 The Queen’s Horses.  This is the Jubilee show held in mid-May 2012 at Windsor Castle .  The thing I most like about it is the old footage shown between performances, which includes the first visit by the Queen to Australia in 1954 (the stunning landing at Sydney Cove) and to Melbourne last year (the walk through Federation Square, where I saw it from across St Kilda Road).  The show even has Helen Mirren, who played The Queen in the movie of that name, as a presenter.

The next video is of the service at St Paul’s Cathedral and the lunch at Westminster and the carriage procession afterwards.  The Duke of Edinburgh was not present as he was in hospital with an infection.

It’s almost 6 hours long, so please yourself what you want to watch.

The next video is the Jubilee Concert held in front of Buckingham Palace.  Once again the Duke of Edinburgh was not present as he was still in hospital.  The concert is 3 hours 20 minutes long, so watch what what you like.

I can’t resist including this documentary about the Coronation on 2 June 1953.   I found it very interesting, especially with the anecdotes from many who took part in the ceremony in some way.   As a photographer, I appreciated the anecdote by BBC broadcaster Richard Dimbleby beginning at 1.16.40 about how he overcame a restriction on how close the cameras could get to the Queen and other members of the Royal family.  Richard Dimbleby OBE passed away in December 1965.

For your information, in case you find the Coronation ceremony a little confusing, I’ll explain that there are two crowns worn by the Queen.  The first is the large, heavy, gold St Edward’s Crown that is used only for crowning the Queen and during the rest of the ceremony.  At the end of the ceremony the Queen goes out the back, and emerges wearing purples robes and the smaller diamond studded Imperial State Crown.  Queen Victoria  was actually crowned with this crown and not St Edward’s crown.  The  Queen wears this crown at the opening of Parliament each year.

The following video is a performance of Handel’s coronation anthem Zadok the Priest with the words as written for the coronation of King George II in 1727.  The video has footage from different times and events in what seems to be no particular order.

Here is a very short video of the Queen putting on the Imperial State Crown  for the opening of Parliament.  The Queen arrives at Westminster wearing a diadem and white fur stole.  The Crown arrives by a separate coach and is escorted up the stairs to the room where the Queen will put it on.