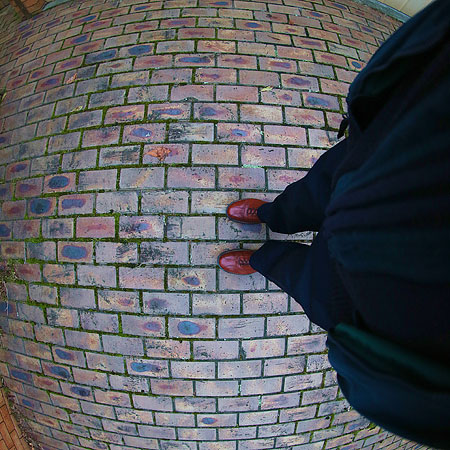 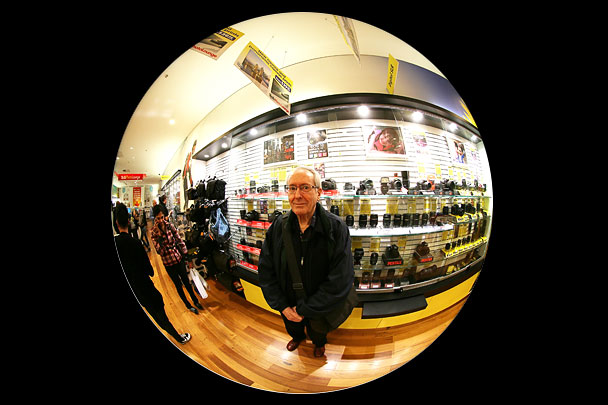 The feature photo for this post was taken with the Canon EF 8-15mm f4L USM fisheye lens that I bought at Ted’s camera shop at Chadstone shopping centre last Monday.  The above photo was taken at Ted’s by Ryan with a demo lens which he mounted on my Canon EOS 5D Mark III which he sold me a few weeks ago.  The reason I asked Ryan to take a few photos of me for this post was not because I wanted to fill the post with photos of myself, but to show why I had decided to buy the lens.

It’s true that 8mm circular fisheye lenses can take some amazing photos in the hands of a good photographer who knows what he is doing and how best to use the lens for interesting photos.  These lenses also have a scientific purpose for astronomers as they can photograph the whole sky in one photo.  But it’s also true that for general photography, the novelty of circular fisheye lens photos can wear thin if you overdo it.

The beauty of this lens is that it’s a zoom and can go from circular fisheye at 8mm up to full frame rectangular fisheye at 14mm and 15mm focal lengths.  The Canon 8-15mm lens is, so far, the only fisheye zoom lens in the world, and it’s a Canon L series professional lens.  But what sets the lens apart for me is not just the amazing fisheye effects, but the fact that it is so sharp, and can focus so closely, and has such good colour, that combined with the 22.3MP Canon EOS 5D Mark III, it can be the source of normal looking images that are a small crop from the original photo.

For example here is a crop from another photo Ryan took last Monday: 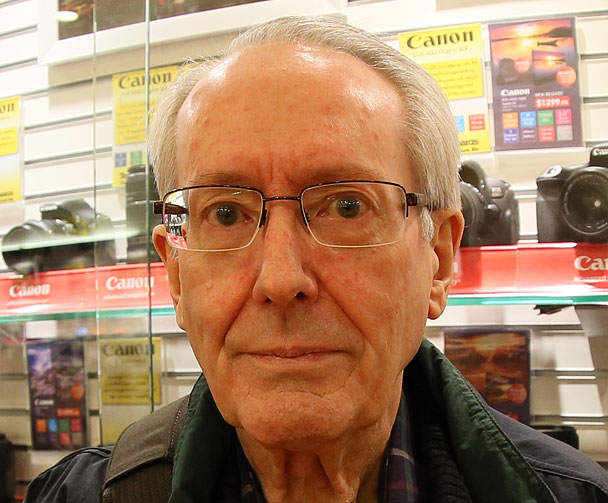 Coming back to the feature photo for this post, here is a crop from it: 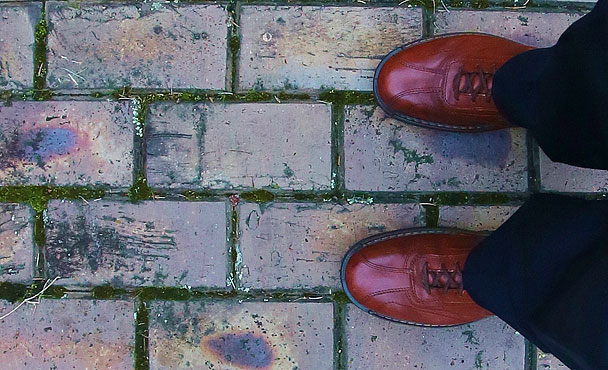 The photo below was taken at home with the lens at the 15mm length.  It shows the full image.  The lighting behind the ornament (a gift many years ago from a dear friend) is the Flashlight app on my iPhone.  The lighting affects the look of the ornament, and make it look solid white, whereas it is semi-clear and transparent. 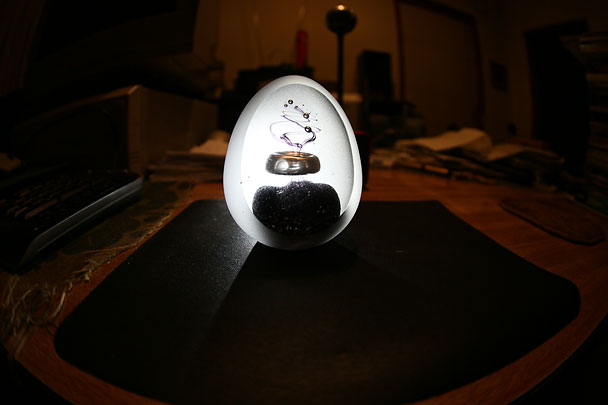 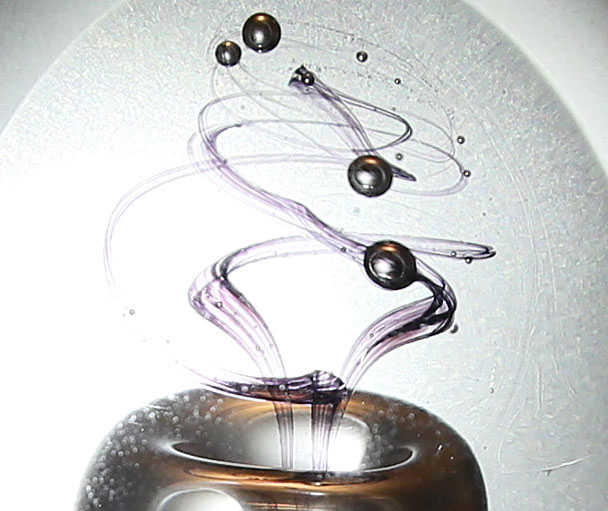 And next is an even closer crop of another photo taken at the same time. 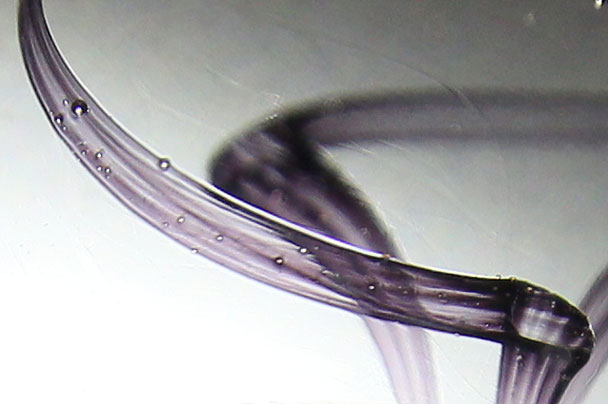 In the two photos above you can see the depth of field is quite short when you the images at such a close crop.  The next photo is a close crop of a photo of the same ornament taken earlier in the day with natural light. 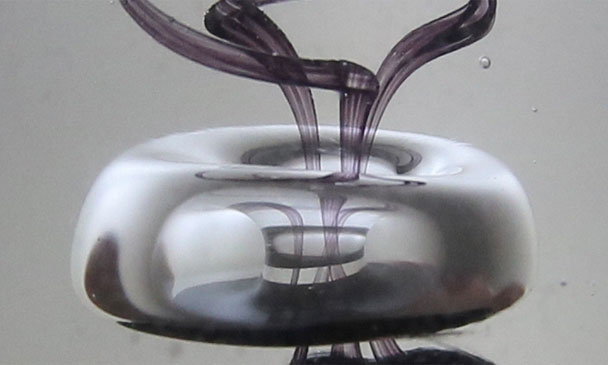 As you can see, the above photo (#191) has greater depth of field than the ones above.  The following shows the full frame image of the photo #191 above.  Both the subject and the camera are handheld.  It looks to me a bit like a B&W photo, but it’s just the gloom of the winter’s day.  If you look carefully you can see some colour in my hand. 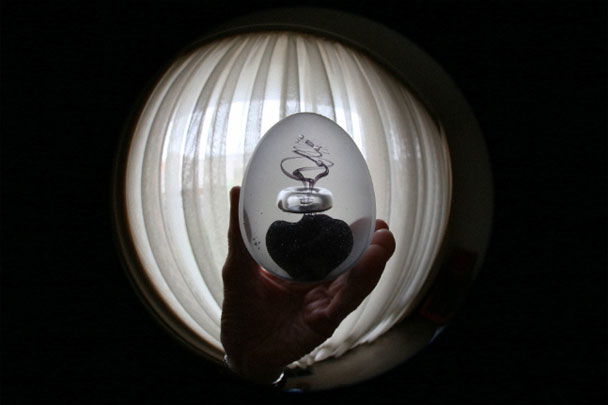 Perhaps by now you might see the reason I chose to buy the Canon EF 8-15mm f4L USM fisheye lens.   To quote from one review:

“The Canon produced very decent resolution figures in our lab. The sweet spot is more at the wide end of the zoom range (the circular view at 8mm). The center quality is nothing short of breathtaking here – it even exceeds our usual scale.”

If you want to read the full review and see photos of the lens you can do so at Photozine.de.

Here is another example.  It’s a crop from a photo I took of myself inside, in very dim light at 4.00pm Thursday, just before going out to the local supermarket.  It was cold and wet weather, on a dark and gloomy afternoon. 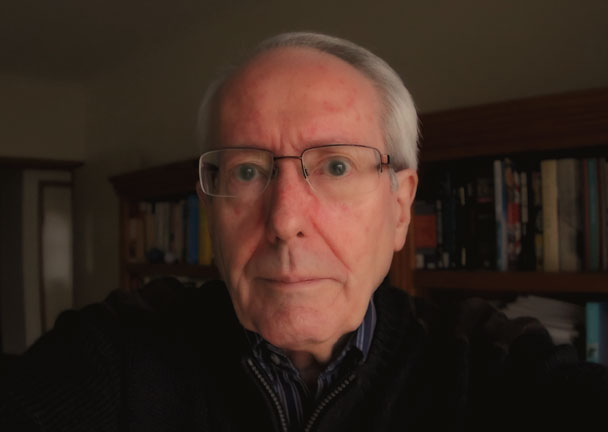 Unfortunately, my face was blotchy that day and the grey light  of the gloomy day emphasised it.  So I used Nik Color Efex (a Photoshop plugin) to find a preset that made the red blotches less noticeable.  I chose the above effect as the colour not only makes the blotches less obvious, but it also softens the detail (and image sharpness) as well, a little bit like a soft focus lens.

Below you can see the whole photo from which I created the above image.  It’s straight from the camera (apart from reduction in size).  Most of  photo is very dark because of the dim late afternoon light on a gloomy day.  The exposure and focus was on my face. 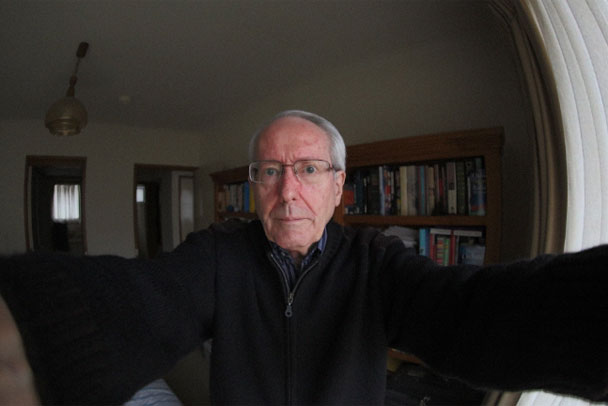 In case you can’t see how I took this photo myself  hand held, I’ve used Photoshop’s Shadows/Highlights feature to lighten the shadows in the above photo to show my arms clearer. 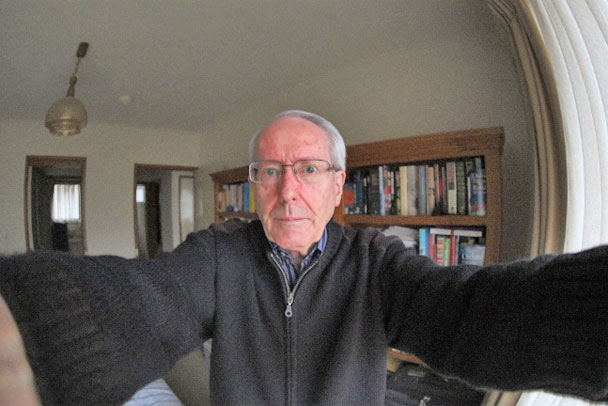 An interesting thing about the photo above is that my arms look widely outstretched.  But they are pointed in front of me to hold the camera as far away as possible from me, to reduce face distortion.  In fact my arms were pointed slightly inwards, as the camera is only 6 inches (15 cms) wide.

Here are a couple of shots taken with the lens.  The first was taken in my lounge room Friday night, and the second was taken Friday afternoon just before sunset. 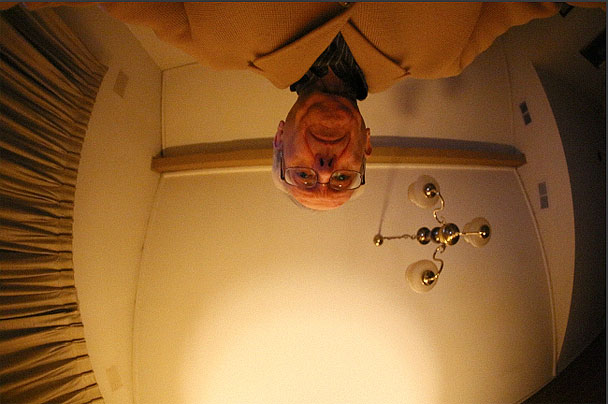 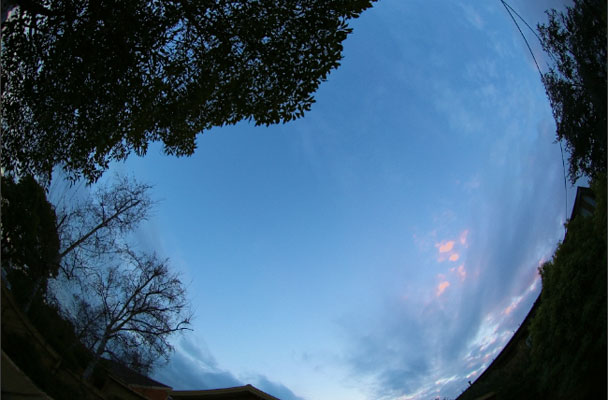 If you would like to see more of the lens itself, here is a short video:

If you would like to find out more about the lens and see it in use, here is an entertaining 14 minute video, in which you will see a self-portrait by Pro Vader in action, and other shots taken with the lens. You will need to get ready to turn down the volume – the video is too loud for my taste.

If you watched the above video hosted by Jared Polin you will have seen his warning about getting so close to the subject (because it looks so far away in the viewfinder) that there is a risk you will hit it with the lens. Unfortunately, this is all to true. When taking the circular fisheye photos of the ornament above, with the ornament in my left hand and the camera in my right hand, I banged the lens against the hard ornament. Oops! Shock horror and sickening feeling! Fortunately, the ornament has a flat front, and I can’t see any damage to the lens. A lesson learned, I hope.

You can see more of Jared and FroKnowsPhoto.com videos here.