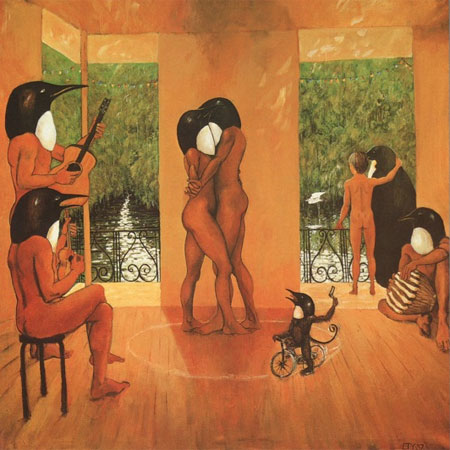 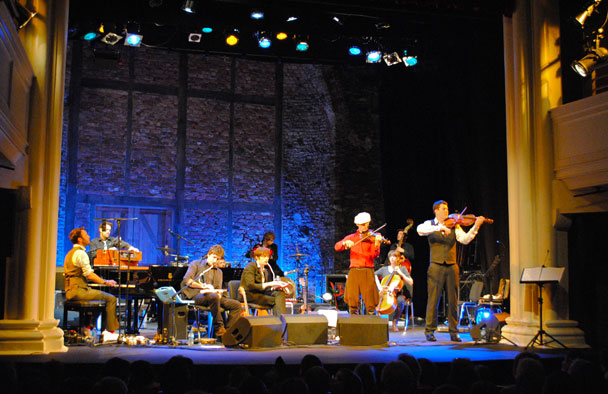 In the past year many of my posts have been about classical music, so perhaps it’s time I told you that one of my favourite music ensembles is the Penguin Cafe Orchestra. What prompted me to mention it is that the band is coming to Australiu early this year.

The Penguin Cafe Orchestra website is here.   It has details of where to buy tickets and make bookings.  I don’t think I’ve seen a website like it before, where you can scroll so far to the right, as well as down, from the home position.

I first came across their music a few years ago, after my retirement in November 2002, while waiting in the reception area for my doctor at Southbank Medical Centre (Melbourne).   I was about 10 minutes early that day, so it gave me time to read one of the magazines.  There was music playing, but I took no notice of it.  Well, not for a while.  But it began to grow on me so much that I asked my doctor about it, and he told me it was the Penguin Cafe Orchestra.  I don’t remember now which album it was, but I bought it as soon as I could – the first of many of their albums I’ve bought.

This post is not the first time that I’ve featured the music of the Penguin Cafe Orchestra.  My main home page at jthonlinecom has a brief article in the left sidebar about the Elders/Fosters Art Collection and a link to a slideshow.  The first two tracks in the background music of the slideshow are two of my favourite Penguin Cafe compositions.

Here is one of their most famous compositions:

And here is the same music in full, without interruption.  As always, click on the X to remove the advert.  If anyone understands the very end of the video with the dog), please tell me.

The following video is from the Melbourne Recital Centre page advertising the concert on 5 March this year.

Here is a much clearer video of a different performance of the same music.   Unfortunately the beginning is a bit clipped and the visual in the final 45 seconds is impaired by rolling credits.

Well, I might know that the Penguin Cafe Orchestra is coming to Australia in early March, but I didn’t know that Fleet Foxes (see my post of 1 November 2011) performed in Melbourne last Friday night.  Here’s the review from The Age today:

THERE are times when listening to Seattle sextet Fleet Foxes it’s hard to believe founding member and frontman Robin Pecknold is just 25, his bandmates about the same. Together they create music reminiscent of the best harmonies from the ’60s and ’70s, with musicianship that experienced folk/rock bands many years older would dream of creating.

Pecknold and guitarist Skye Skjelset first met in high school and the band was gradually pulled together over several years, resulting so far in a stellar EP and two acclaimed albums, including last year’s Helplessness Blues.

Opening songs The Plains/Bitter Dancer, Mykonos and English House were greeted enthusiastically with Pecknold and those well-honed harmonies starring early. Morgan Henderson switches from upright bass to flute to guitar and fiddle with ease. In between songs, drummer Josh Tillman was the only one to break in with light-hearted observations; Pecknold was a picture of concentration, tuning his guitar, adjusting his amp, always readying himself.

Blue Spotted Tail with just Pecknold on stage was among the highlights before the band returned to complete the near-two-hour performance with Grown Ocean and Helplessness Blues.