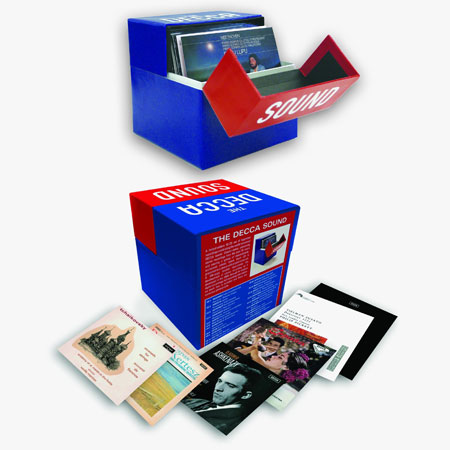 While it’s still the festive season I’m going to tell you about the Christmas present I bought for myself in mid-October and saved until Christmas to begin exploring.   It’s a CD boxed set called The Decca Sound.  Rather than tell you about the set myself, I’ll leave it to this Decca video:

I found a video on YouTube that has a longer and more detailed version of the above promotion.  It has extracts from some of the different types of music in the collection.  I suspect that some people who say they don’t have an interest in classical music might find there is far more to enjoy in this collection than they would expect.  You only have to watch TV talent shows such as Idol (now dropped in Australia), X-Factor and Australia’s Got Talent, or any of the overseas versions, to see that audiences who would probably say they don’t like opera, give standing ovations to anyone who sings an operatic aria well.  One of the most popular arias in these TV shows is Nessun Dorma from the opera Turandot by Puccini.  The Decca boxed set has 3 versions of the aria.  One is in the Turandot opera highlights CD (Pavarotti and Sutherland), and the other two are in Carreras Domingo Pavarotti in Concert recorded in Rome on 7 July 1990.  This recording of The Three Tenors is not the same as The 3 Tenors in Concert recorded in 1994 which is spectacular in its own right.

Here is the longer video, in non-HD soft focus, with a more detailed sampling of music in the collection:

The first CD in the boxed set is The Three Cornered Hat by Manuel De Falla, with Ernest Ansermet conducting L’Orchestre de la Suisse Romande.  Bear in mind that the boxed set is a limited edition, and many of the CDs in the collection may no longer be otherwise available, which makes the set even more desirable.  The first album in the collection is available from iTunes for A$16.99.  You can also buy this album from Amazon .com for prices ranging from $34.99 to $249.99 for a used CD, as can be seen below. 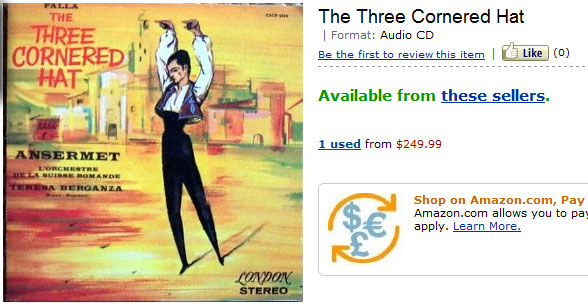 Here is the first track from the above CD, the first in the collection.  There are 14 tracks and only two feature the singer – Teresa Berganza.  The first track is one of them.  Note the quality of the sound if you have good audio card and stereo speaker system as part of your computer.   If you don’t have one a good computer stereo system, you are missing out, and should treat yourself, if you enjoy music, games or video or movies on your computer.   A good system doesn’t have to be built into your computer – they can be connected by Firewire or USB.   An external audio interface and stereo speaker system with sub-woofer will work with your current and future computers.

(Don’t forget the volume control on the left.)

If you’d like to find out more about the boxed set, I strongly recommend you visit Decca’s own website, which describes The Decca Sound collection as follows:

Throughout its 80 year history Decca has always remained focused on a single aim — to capture great performances by legendary artists in the highest possible fidelity.

“The Decca Sound” is a deluxe limited edition of 50 CDs of legendary classical recordings in some of the best sound quality ever committed to disc. The inspired collaborations of great artists, gifted producers and dedicated engineers have resulted in a treasure trove of award-winning and critically acclaimed recordings. This special edition brings together a truly representative selection of these legendary performances for the first time.

One of my delights in exploring the collection was to find that CD #48 is a CD I’ve previewed many times on iTunes, but have been unable to find anywhere to buy as a CD.  It’s the highlight of an opera by Puccini, not often performed or recorded.  I have the full opera on order from Presto Classical.  La Fanciulla del West – an opera by Puccini set in the gold rush days of California.

Here is the final aria of the opera.  I include it because I think the singing and music is sublime, but also because it reminds me of some other Puccini operas, such as Tosca and Turandot, and in parts even the final scene of Aida by Verdi.  What do you think?  The English name of the opera is Girl of the Golden West.

Here below is track 7 in the highlights of La Fanciulla del West from the boxed set – Quello che tacete.   This opera by Puccini was commissioned by, and first performed at, the Metropolitan Opera in New York on 10 December 1910 with Enrico Caruso singing.  Listen very carefully and you might pick up hints of part of a song you may have heard before in a famous musical and movie made of it.  When the countdown timer reaches the 30 seconds to go mark, the phrase in question becomes clear.  Do you recognise the musical with a similar phrase?   If so, please make a comment.  Or make a comment if you recognise the phrase but can’t put your finger on where you’ve heard it before.  I think it’s a sublime phrase.

The Decca Soundboxed set is available online from Amazon and Presto Classical, and is currently available at many of the good record stores, such as Discurio and Readings in Melbourne.  I imagine the same would apply in other cities.  The current price in Australia is about A$139.  The Amazon.com price is US$123.17 plus shipping.  The Presto Classical price is currently A$159.50 plus A$4.15 postage.   When I bought my set back in October the price at Presto was A$131.76 plus $4.15 postage.  All of these prices are a bargain for a set of 50 high quality CDs which Presto Classical describes as:

Classic-status pioneering stereo recordings from the past 55 years and starring a galaxy of internationally-acclaimed artistic talent.

Each CD is presented in a sleeve with original cover art.

Where an original release may have been of short duration due to limitations of the LP a bonus work featuring the same artists has been added.

A 200-page booklet documents the development of stereo recording as it developed in the 1950s through to modern digital recordings; there is an article on Decca artists and repertory with particular reference to the artists featured in the set.

Full recording information on each disc is included and there are numerous photographs.

If the idea of a 50 CD boxed set of classics seems too overwhelming, you could try The Decca Sound highlights set which sells for about A$25.  It’s great value.  For the price of one CD you get 5 CDs.  You can audition it in iTunes, but don’t buy the set for the iTunes price of A$53.99.  You can buy it from Readings or other record shops or Amazon or Presto for about $25.  This set is a good introduction to the full boxed set.  Even if you eventually buy the 50 CD boxed set, the highlights set would still be useful as an introduction to many of the CDs and music in the full set which you might otherwise never get around to playing.  It’s a worthy compilation in its own right.

Almost two weeks ago I noticed that iTunes sells the The Decca Sound (50 CDs) as well as the Highlights set of 5 CDs.  The price of the Highlights set remains at A$53.99 for the 5 CDs.  Based on that price, one might expect that the iTunes price for the whole collection of 50 CDs could be A$539.90 – but it’s not.  It’s A$14.99 for the whole collection.  Mind you, the 50 CD collection is treated as one album, and as a result the tracks are not in the order of the individual CDs and are sometimes scattered and even if the tracks for an album are together, they might not be in order.  Still, you can’t argue with A$14.99 for 817 tracks, and the search facilities and sorting by columns features in iTunes are a help.

By the way, the price might be small, but the collection isn’t.  It’s about 7.1 GB according to my iTunes folder before and after downloading the “album.”

I have deleted the reference to the Decca website page which listed all the CDs and tracks with recording details, and for most CDs and tracks, the ability to play and audio extract.  The Decca page for the 50 CD set is now blank.  Presto Classical now only sell it as downloads in either mp3 or FLAC file formats.  The downloads are not currently available in Australia.  Amazon no longer sells the set, but USA and UK list sellers who still have copies, and sellers with used copies.  The Amazon UK sellers sell it for approx £359.  The iTunes price was adjusted a few years ago to $159.99 when they realised their price of $14.99 was incorrect.

So, it now seems that The Decca Sound really was a limited edition.  Once all the copies were sold, that was that!  The music is superb..