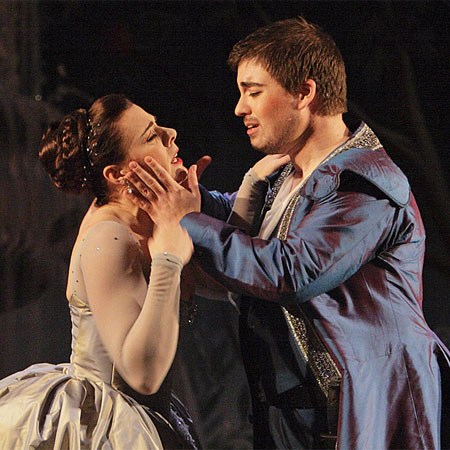 In the past month I’ve made two posts about the counter-tenor Philippe Jaroussky.  As I’ve mentioned, I first came across him when I bought the rediscovered opera by Vivaldi – Ercole s’ul Termodonte.   When I first listened to the opera I assumed his part was sung by a soprano, and I found it difficult to tell the voices apart in the first duet.  It was only when I watched the YouTube video (which I’ve included in my 15 November post) that I discovered that one of the “sopranos” was a man.  I’ve this two posts because it seems that Philippe Jaroussky is one of the big discoveries in the world of classical music and opera in 2011.

However Philippe is a counter-tenor.  The following video is about Michael Maniaci who describes himself as a soprano.  By the way, because I began dabbling into learning Italian in January 2010, I know that Maniaci is pronounced – Mahn-ee-AH-chee.

With counter-tenors and male sopranos the subject of three posts, I think it’s time to reveal to you some of the other singers and songs I came across for the first time this year.  I mean singers other than Fleet Foxes (see my  post on 1 November) and the pleasant young Johnny Ruffo from The X factor.  I mean the singers of Mahler’s lieder.

I’ve written before that this year I finally discovered Mahler, after the seeds were sown in my mind from listening to a cassette tape in the mid 1970’s.  However, instead of gradually dipping my toes in the water, I bought two collections of all his works.  One of recordings originally issued on the DGG label and the other of recordings originally issued on EMI.  I’ve found that I not only enjoy the symphonies, but have also come to enjoy the Lieder.  Yes, on first hearing  – rather than listening- the Lieder seem to be gloomy cheerless songs sung in German.  But when I opened my mind, and actually listened to the deeply beautiful voices, with the wonderful German language sounds so carefully enunciated, and the sublime orchestration, I began to appreciate these superb songs.  When I say “deeply” beautiful I mean it both colloquially and literally.  The male voices are baritone and the female voices are mezzo-soprano, in the songs I’ve listened to so far.

When I was a student at Mount Gambier High School in the early 1950’s, the Headmaster (Mr Campbell) took one our lessons, and in it he talked about enjoying everything you can  in life.  He said that people who say they are bored with something or other, are really saying that they don’t understand and appreciate whatever it is that bores them.  I have never forgotten that, even 60 years later.  It’s as true today as it was then.  And so, with that in mind, I have in recent posts begun presenting videos and music that some visitors to this site might not enjoy.  Well, not at first at first.  But perhaps they might watch and listen with an open and inquiring mind to try to discover for themselves what it is that I and so many others like so much.

I’ll start off with a video of Sir Thomas Allen singing the Mahler song I have so far come to enjoy most – Die zwei blauen Augen.  It took a while before this song grew on me, as they say.  Or perhaps more accurately, it took a while before I grew into the song  and began to appreciate it.   But once I connected to the song, I loved it.

By the way, Sir Thomas Allen is a very interesting person, and you can read about him in this article in Wikipedia.  I have to confess that I’d never heard of him before I began writing this post.  That seems strange to me  now that I learned that he is an internationally renowned operatic singer regarded by many as one of the best lyric baritones of the late 20th Century.   Well that probably explains why I’ve never heard of him before writing this post.  He’s a baritone.  All the great opera singers who have become household names, such as The Three Tenors – Pavarotti, Domingo and Carreras – are tenors.  These days we now have  popular ensembles such as The Ten Tenors singing a mix of pop, rock and opera.  And we had Anthony Callea.

It’s not only the tenors who are household names, but some of the operatic arias written for tenors.  The most famous aria these days is Nessun Dorma which achieved world recognition after the performance by Luciano Pavarotti at the 1990 World Cup in Italy.

I can’t think of the name of any baritones or arias written for them – other than those below.

In case you don’t read the Wikipedia article about Sir Thomas Allen CBE, I’ll mention that apart from his long career as an opera singer, he starts a new position on 1 January 2012 as Chancellor of Durham University.

Below is another version of the same song, with Thomas Hampson as the baritone.   The conductor is Leonard Bernstein, one of the great exponents of the works of Mahler.  This recording is the one in my DGG complete works of Mahler.

And finally the same song (Die zwei blauen Augen) again.  This time it’s from my EMI boxed set of the complete works of Mahler. The singer is Dietrich Fischer-Dieskau, a German lyric baritone now retired (he was born 10 years 5 months+ before me.   He is regarded as one of the great singers of the 20th century.

While writing this post I came across a work I’d never heard before.  That of course is a confession that I haven’t yet listened to either of my complete works of Mahler in full.  It’s a song that’s growing on me the more that I listen to it.  I’m sorry to say that in my ignorance, I didn’t realize that this is one of the greatest Mahler songs – Ich bin der Welt abhanden gekommen.

The first is sung by Magdalena Kožená, a Czech mezzo soprano, married to the Sir Simon Rattle, the great English conductor.

The following version is sung by the Swedish mezzo-soprano Katarina Karneus.

An extract from this song can be heard in the following Vimeo video from Le maître de musique (The Music Teacher) – a 1988 Belgian film:

The following image is the cover of my boxed set of the complete works of Mahler on the EMI label. 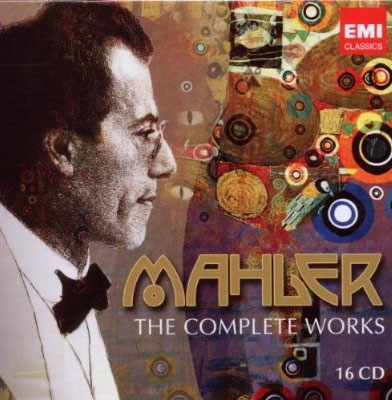 By the way, you can buy Mahler: The Complete Works – 150th Anniversary

All are great prices for 16 high quality CDs of some of the most beautiful and spectacular music ever written.

I’ll quote extracts the first reviewer on Amazon.com (leaving out his list of all the CDs) dated 1 July 2010:

It was bound to happen sooner or later: pretty much everything known by Mahler put into one box (16 cd’s). Of course, one could argue endlessly about what performances of the various symphonies EMI could have/should have chosen. But what this set has going for it are a series of outstanding renditions of the various song cycles and vocal works. In addition to having the Thomas Hampson/Wolfram Rieger (piano) “Five Ruckert Songs”, disc 16 gives us a survey of numerous “Ich bin der Welt abhanden gekommen” performances – possibly THE most gorgeous orchestral song ever composed – captured by EMI over the years. That list includes Janet Baker, Christa Ludwig (twice), D. Fischer-Dieskau, Thomas Allen, Brigitte Fassbaender, and Katarina Karneus. But rather than yack on and on, I’ll simply leave you a list of what this box contains.

Needless to say, this set captures many of the biggest names in the Mahler “biz” ever: Barbirolli; Horenstein; Furtwaengler (his one and only studio recording of Mahler); Bruno Walter; Kathleen Ferrier; Klaus Tennstedt; Simon Rattle (opinions vary, but they chose some of his better work here); Janet Baker; Christa Ludwig; D. Fischer-Dieskau; Brigitte Fassbaender; C.M. Giulini; Chicago Symphony (caputred in the Medinah Temple); Berlin Phil.; Philharmonia Orch. (the Walter Legge years); E. Schwarzkopf; the incomparable Fritz Wunderlich (“DLvdE”) – the list goes on, so most of this set is pretty much self recommending. Even if you already own some Mahler, if you don’t have many of these performances, you probably ought to indulge yourself with this set.

No one need be reminded that we’re in the middle of summer and an economic recession. But when the holidays roll around, few things will say “Merry Christmas” better to music lovers than this box. Ponder that thought. It’s better than yet another “La Boheme” or Beethoven cycle, not to mention Lady Gaga.

Hmmm.  I’d never thought about this before.  This set would make a stunning present and at very reasonable price.  The only problem is that I don’t know if any of my friends (other than the couple who introduced me to the Lexus) even enjoy classical music, let alone might enjoy the works of Gustav Mahler.

By the way, to put Mahler’s timeline into context, he was born on 7 July 1860, and died on 18 May 1911.  Hence the EMI album released last year commemorates 150 years since his birth.  Earlier this year the 100th anniversary of his death was recognized.  His widow Alma died on 11 December 1964 – barely two months before I’d been with Elder, Smith & Co., Limited and then Elder Smith Goldsbrough Mort Limited for six years.  My father died in July that year.