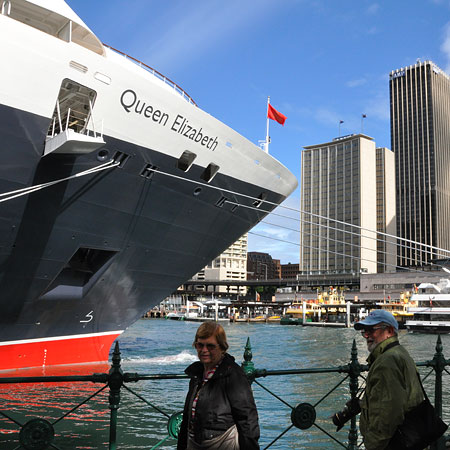 It’s now over a year since I made several posts about the official naming ceremony for the new Cunard liner Queen Elizabeth.  Since then a number of interesting videos have been published on YouTube, and I’m going to present those I especially like, not only for the video, but for the background music and in some cases, live audio.   I’ll start off with an official Cunard advert for the ship.

The next video was taken by a passenger on the maiden voyage sailing from Southampton.   It’s a superb video that gives you a feel of what the experience would have been like to have been on the Queen Elizabeth when boarding and sailing.  The audio has two of my old favourites – starting with Crown Imperial and ending with Land of Hope and Glory.  The audio is punctuated with some ship and harbour sounds.

The next video was taken while the ship was anchored in Honolulu, Hawaii.  I don’t know who took the video, but whoever did certainly knew to shoot superb footage and edit it professionally.  However, apart from superb video footage, the reason I’m sharing this video is the superb background music – George  Gershwin’s Slaughter on 10th Avenue in full.  This would make a  perfect ending to this post, but there is more to come.

I am not a fan of cruise ships.  It’s the big ocean liners that interest me – Transatlantic liners – and the ships that used to travel between the UK and New York, or the UK and Australia in the days when everyone  (but the super rich) travelled overseas by ship.  Here is a video showing some great Transatlantic liners over the years.  Once again, I like the music.

With all the above videos about the Queen Elizabeth and other great liners, I’ve decided to show a beautiful photo tribute to the ship’s namesake – the Queen herself.  It was posted on YouTube by someone in Indonesia.  I love the opening music.  I wish I knew what it was.   It is then followed by a grand rendering of God Save the Queen.   I noted with great interest that quite a high number of the photos in the slideshow show the Queen dressed for a visit to an Islamic country.

Just think about that.   Indonesia is a vitally important nation to Australia, yet our relations over the years have not been all that good for many reasons.  Yet many of our citizens have  much in common.

The next video is a TV news report of the Queen’s 85th birthday on 21st April 2011.  Normally, the Queen’s actual birthday might not make the TV news, but this year it fell on Maundy Thursday, the Christian holy day before Good Friday.  The followiing quote is from Wikipedia.

The Maundy Thursday celebrations in the United Kingdom today involve the Monarch (since 1952, Queen Elizabeth II) offering “alms” to deserving senior citizens (one man and one woman for each year of the sovereign’s age). These coins, known as Maundy money or Royal Maundy, are distributed in red and white purses. This custom dates back to King Edward I. The red purse contains regular currency and is given in place of food and clothing. The white purse contains currency in the amount of one penny for each year of the Sovereign’s age. Since 1822, rather than ordinary money, the Sovereign gives out Maundy coins[42], which are specially minted 1, 2, 3 and 4 penny pieces, and are legal tender. The service at which this takes place rotates around English and Welsh churches, though in 2008 it took place for the first time in Northern Ireland at Armagh Cathedral. Until the death of King James II, the Monarch would also wash the feet of the selected poor people. There is an old sketch, done from life, of Queen Elizabeth I washing people’s feet on Maundy Thursday.

Near the end of the video you can see the King’s Troop firing a royal salute in Green Park, near Hyde Park.  I saw this in my visit to London  in June 1993, during the Trooping of the Colour ceremony.

The King’s Troop, Royal Horse Artillery is a ceremonial unit of the British Army. It is a mounted unit and all of its soldiers are trained to drive a team of six horses that pull each of the six First World War-era 13-pounder state saluting guns. Its duties include the firing of Royal salutes in Hyde Park on both Royal Anniversaries andState Occasions, and providing a gun carriage and team of black horses for State and Military funerals.

The unit is most often seen providing gun salutes on state occasions in Hyde Park, and Green Park.

And finally, a beautiful rendition of the national anthem of the United Kingdom sung at the Royal Maundy Service at Westminster, on the Queen’s birthday on 21st April this year.