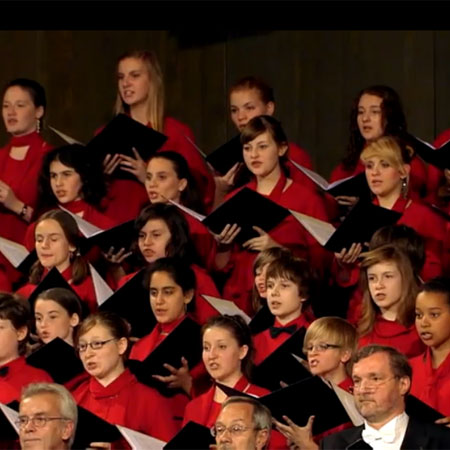 My last post, about the new Fleet Foxes album Helplessness Blues, featured the title soundtrack.  But the post also featured a video promotion extract from the new Blu-ray recording of Mahler’s Symphony No.8.  Ralph made a comment that he enjoyed the Fleet Foxes recording, and (not his words) politely implied that the Mahler was taking time to grow on him.  Well Ralph has nothing to be concerned about.   The video, which runs for 4 min 21 secs, only gives a very brief and scant view of the symphony which can run for 90 minutes, depending on the tempo of the conductor.  The video is too short to give newcomers to the work a reasonable opportunity to appreciate the symphony.

Besides that, my first and only acquaintance with Mahler was when I bought his Symphony No 1 with the London Symphony Orchestra conducted by George Solti on cassette tape in the 1970’s.  It’s a 1964 recording.  I’d never bought a Mahler recording since, on either cassette tape, LP or CD.

But my enjoyment of the work must have stuck in my mind, because this year, after buying the Olive O4HD and then discovering Presto Classical as a great new source of buying classical CDs, I went Mahler mad, and soon bought two collections of his complete works, and have since bought several individual symphonies for the particular performance.

To be honest, in my short acquaintance this year with the complete works of Mahler, the 8th Symphony has seemed confusing to me, as it seemed to comprise two totally disparate movements.  The awesome 1st movement and the non-event 2nd movement.  I’m only now beginning to realise that there are musical links between the two movements.  When you listen to the whole work, the quieter second movement gradually develops and proceeds towards the stunning finale.  If one is able to concentrate on listening in suitable surroundings. the symphony can become an emotional experience.

The following is a short overview of the symphony, for the purposes of this post.  I’ve taken the material from Wikipedia, but have edited it and rewritten parts of it to suit this post.  Thanks to Wikipedia for the information.   Check the full article here.

The Symphony No. 8 in E-flat major by Gustav Mahler is one of the largest-scale choral works in the classical concert repertoire. Because it requires huge instrumental and vocal forces it is frequently called the “Symphony of a Thousand“, although the work is often performed with fewer than a thousand, and Mahler himself did not sanction the name.

The work was composed in the summer of 1906.  Mahler conducted its first performance in Munich on 12 September 1910.

The structure of the work is unconventional; instead of the normal framework of several movements, the piece is in two parts.

Part I is based on the Latin text of a 9th-century Christian hymn for Pentecost, Veni creator spiritus (“Come, Creator Spirit”), and Part II is a setting of the secular text from the closing passages from Goethe’s 19th-century dramatic poem Faust.  The two parts are unified by a common idea, that of redemption through the power of love, a unity conveyed through shared musical themes.

This leads me  into presenting a series of YouTube videos of the Mahler 8th, recorded by the National Youth Orchestra of Great Britain with Sir Simon Rattle conducting.

This is a very interesting series of videos.  As best as I can make out, it’s a recording of a live performance at the Albert Hall, and is not available elsewhere, either as a CD or as a DVD.  If you look carefully at the Hall you will signs for the BBC Proms.  These videos could be from the 2002 Proms, at which Simon Rattle conducted Mahler’s ‘Symphony of a Thousand’ with the National Youth Orchestra of Great Britain.

The videos are cut into segments under 10 minutes as required by YouTube at the time the videos were posted.  Unfortunately, this results in abrupt endings to some videos before you pick up the continuing action in the next video.  The videos have Japanese subtitles, which is not helpful to English speakers, and it looks a little odd.  At first I thought it must be a recording of a concert in Japan, but then I began to notice the unmistakable interior of the Albert Hall.   I’m grateful to The Chrome Dragon that the videos are there at all, and in such good video and audio quality.

So here goes.  By the way, feel free to dive all over the place in the videos to become familiar with what to expect.  And perhaps even watch the last video (Second Movement part 6) first, to hear what the whole work leads up to at its tumultuous finale.

If you can’t appreciate the beauty of this symphony, I’m sorry to say that I suspect you have no soul.

And note that it is a Youth Orchestra.  The players are all so young – and talented.  The singers and choir are mature performers.