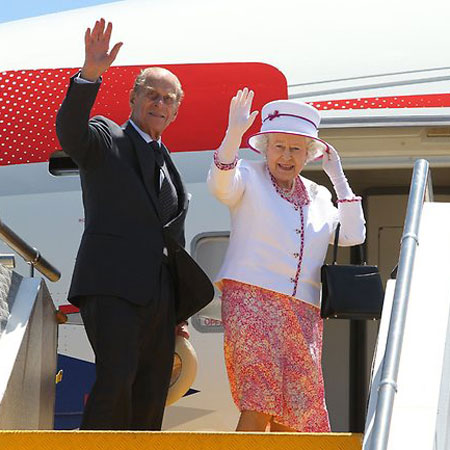 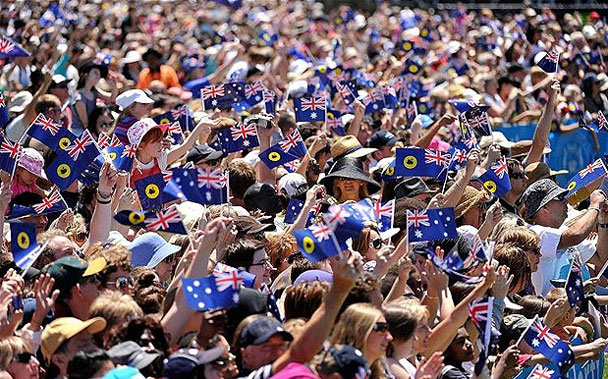 Yesterday afternoon, Her Majesty The Queen and His Royal Highness The Duke of Edinburgh attended an event in Perth called The Queen’s Great Aussie BBQ.  The Perth crowds that turned out to see the Queen’s drive to the event, or attend the event itself, were estimated at figures from 100,000 to 200,000.  The above photo from The Telegraph of London shows some of the crowd, many of which are waving the Western Australia flag with the black swan emblem inside a yellow circle. What is known for sure, is that 130,000 sausages were ordered for the BBQ.  After the official reception and speeches at the BBQ, including the Queen’s only speech at a public gathering during this visit, the Queen and the Duke then moved among the crowds. 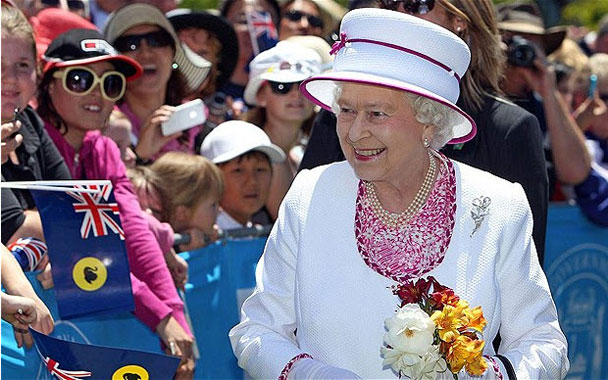 After the BBQ, the Queen and Duke proceeded to the airport in Perth, where they boarded their aircraft and departed Australia. 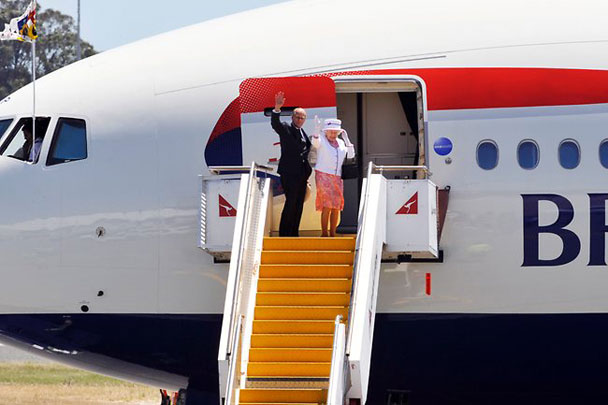 Just in case you think the royal couple will be taking a well deserved rest after returning to the UK, I’ve read that the Duke, at age 90, will fly to Italy a day or two after arriving home to attend meetings relating to his causes.

Here is a summary of the 2011 visit from The Telegraph:

Australians turn out in their thousands to say goodbye the Queen.

Tens of thousands turned out to bid the Queen farewell at the end of an 11 day tour of Australia with the Duke of Edinburgh.

It was a trip that began with controversy over the absence of a Prime Ministerial curtsy, but Australia’s enduring admiration for the monarchy was evident as vast crowds turned out to bid their farewells.

More than 150,000 people gathered on the banks of the Swan River in Perth, Western Australia, for the Queen’s appearance at the “Great Aussie Barbecue”, her final engagement of an 11-day tour with the Duke of Edinburgh.

Visibly moved by the thousands of well-wishers, the Queen, 85, spoke of feeling “overwhelmed” by the rapturous reception she and the Duke have received throughout their tour.

“We have enjoyed this visit immensely and thank all those who have come out to welcome us,” she said. “We have been overwhelmed by your kindness and support.

“Once again, we will return to the United Kingdom with fond memories of our time here and the warm Australian welcome we have received on our 16th visit to this beautiful country.”

Buckingham Palace has insisted it was not the Queen’s valedictory visit, but from the size of the crowds that turned out to see her yesterday, many Australians appeared to take the opportunity to bid a final farewell to their monarch.

The event attempted to break the world record for the largest ever barbecue, with 130,000 sausages, 8,000 loaves of bread and 150,000 drinks laid on for the occasion.

Prince Philip, 90, who is famous for his royal barbecues at Balmoral where he serves visitors himself, did not disappoint, flipping steaks and chops as he greeted the crowds.

Vincent Garreffa, a chef manning one of the barbecue stalls, said: “We had a rib-eye steak and a pork cutlet which were waiting to be turned, and he did us proud.”

But the Prince declined Mr Garreffa’s offer to sample some of Perth’s finest seafood, including an array of barbecued prawns and crayfish. “I’m not in the mood,” he said.

Wearing a pink floral dress under a white cropped jacket, the Queen took a walkabout through vast crowd, accepting dozens of bouquets from well-wishers who had braved the midday heat to greet her.

Royal aides have expressed their “amazement” at the response to the Queen and the Duke during their visit, which saw 45,000 people gather to watch them take a boat ride down the Brisbane River last week.

The tour, which saw the Queen and the Duke visit Canberra, Brisbane, Melbourne and Perth, has already secured its place in history with the landmark decision at the Commonwealth Heads of Government Meeting (CHOGM) in Perth to end the primogeniture rules for royal succession.

As head of the Commonwealth, the Queen is believed to have backed the change to the law, and attended the meeting at CHOGM with the Prime Minister, David Cameron, who announced on Friday that he had secured the unanimous agreement of all 16 member states.

On Saturday, Mr Cameron praised the Queen for her international “leadership”.

He said: “One of the things that unites the Commonwealth is huge admiration and respect for Her Majesty the Queen and the leadership she has given. It brings us together and unites us.”

The Queen’s visit ended on Saturday with a send-off by the Governor-general Quentin Bryce and her husband Michael, at Perth International Airport.

Hundreds of well-wishers gathered behind a wire mesh fence to wave their final farewells and a cheer went up from the crowd as the royal couple climbed the plane’s steps, the Queen hanging on to her hat in the wind as she waved goodbye.

And here is the account of the last day of the royal visit from the Court Circular, as printed in The Times issue of Monday, October 31 2011 at 12:01AM.

The Queen and The Duke of Edinburgh this morning attended the “Big Aussie Barbecue” at the Esplanade in Perth and were received by the Premier of Western Australia (the Hon. Colin Barnett MLA).

The Queen and The Duke of Edinburgh this afternoon departed for the United Kingdom.

The Governor-General of the Commonwealth of Australia (Ms Quentin Bryce), Mr Stephen Smith MP (Minister for Defence representing the Prime Minister of the Commonwealth of Australia), the Governor of Western Australia (Mr Malcolm McCusker) and the Premier of Western Australia (the Hon Colin Barnett MLA) were present at Perth International Airport and bade farewell to Her Majesty and His Royal Highness on the conclusion of the visit.

The Queen and The Duke of Edinburgh this evening arrived at Heathrow Airport, London, from Australia.