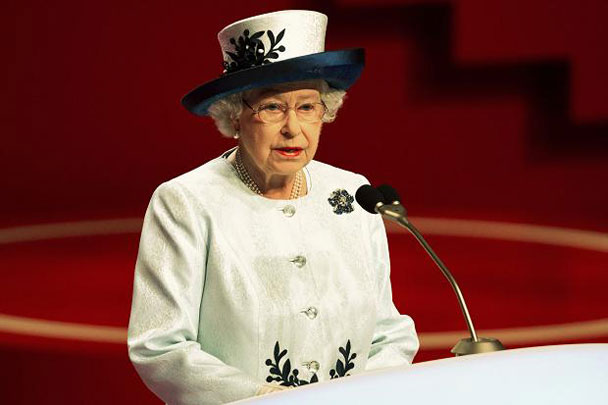 Yesterday, Friday 28 October 2011, the Queen opened the Commonwealth Heads Of Government Meeting in Perth, Western Australia.  This was Her Majesty’s chief official function during her 16th visit to Australia.

For those who don’t know what the Commonwealth is, I’ll quote the beginning of the extensive Wikipedia entry:

The Commonwealth of Nations, normally referred to as the Commonwealth and formerly known as the British Commonwealth, is an intergovernmental organisation of fifty-four independent member states. All but two of these countries (Mozambique and Rwanda) were formerly part of the British Empire, out of which it developed.

The member states cooperate within a framework of common values and goals as outlined in the Singapore Declaration. These include the promotion of democracy, human rights, good governance, the rule of law, individual liberty, egalitarianism, free trade, multilateralism, and world peace.  The Commonwealth is not a political union, but an intergovernmental organisation through which countries with diverse social, political, and economic backgrounds are regarded as equal in status.

In the photo below, from The Times iPad app,  the Queen is with the Prime Ministers of  three member nations of the Commonwealth. 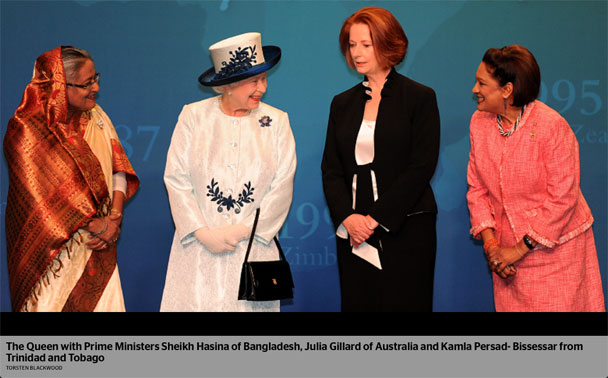 I’m sure you can’t help but notice that the Prime Minsters above are women.  So CHOGM 2011 was an appropriate time for David Cameron, the Prime Minister of the United Kingdom, to announce that he had obtained the anonymous agreement of all 16 nations of the Commonwealth who have the Queen as their Head of State, to a change in the succession laws for the monarchy.   In future, the order of heirs to the throne will be the order of their birth regardless of their sex; and members of the Royal family will be able to marry Catholics without renouncing their rights to the succession.

I’m now going to quote The Times article about the succession announcement.  I hope you’ll find it well worth a read because of its speculations of how the world today might have been different if this proposed change had come into effect at different stages in earlier times.  For example, Henry VIII might not have come to the throne and broken with the Catholic church, and in the process establish the Church of England.   And if the first born of Queen Victoria had become Queen, World War I and II might never have happened.

Once again, I’ll quote from The Times of London:

The decision to scrap male primogeniture and to lift the ban on British monarchs marrying Roman Catholics is decades, if not centuries, overdue. As David Cameron said, making the announcement at the Commonwealth Heads of Government Meeting in Australia, attitudes have changed, and some of the rules of succession “just don’t make sense to us any more”.

They did not make sense to his predecessor either, or to many earlier prime ministers. But all found the procedure for changing provisions laid down in the 1701 Act of Settlement so cumbersome that they simply put to one side a change that did not appear urgent. Several factors have now made this change timely. The worldwide publicity and revival of royalist sentiment generated by the royal wedding in April have focused minds on the succession, and whether a daughter born to the Duke and Duchess of Cambridge should automatically succeed to the throne, were she the first-born, or would be ousted by any brothers born later. Second, recent changes in Scandinavian royal houses and elsewhere have underlined how outdated Britain’s arrangements appear. The Netherlands, for example, adopted full lineal primogeniture as long ago as 1983.

The third reason why this is an appropriate moment to make the change is because of the Commonwealth summit — an occasion hosted by Julia Gillard, Australia’s woman Prime Minister, and presided over by the Queen herself. The Queen remains head of state in 16 of the 54 Commonwealth members — Britain, Australia, New Zealand, Canada and smaller Caribbean and Pacific island nations. Each had to be consulted. Each had the right to veto a change. None did so.

Another anachronism, almost as glaring, has also been removed. In future, no special permission will be required if a member of the royal family wishes to marry a Roman Catholic, nor will such a marriage bar them from the throne. We are centuries away from hysteria over “popish plots” and there is no conceivable reason why the freedom of religion should not apply to the royal family as much as to any citizen. This discriminatory measure forced Prince Michael of Kent to renounce his place — admittedly, extremely distant — in the line of succession when he married Baroness Marie-Christine von Reibnitz in 1978, and in 2008 persuaded Autumn Kelly, the bride of Peter Phillips, to renounce her Catholicism before her wedding so that Princess Anne’s son could remain a potential successor to the throne.

There is still a bar on the monarch being a Roman Catholic, simply because he or she is constitutionally the head of the Church of England. That, too, must one day be changed. But the argument over disestablishment is long and vexed and must first be resolved before the bar can be lifted.

Historical speculation is an amusing, if pointless, game. But had there been no male primogeniture, Margaret Tudor would have succeeded Henry VII, and her younger brother might never have come to the throne or divorced his wife or established the Protestant faith in Britain. If Queen Victoria’s eldest child, also Victoria, who married the German emperor, had been allowed to succeed her mother, her son, Kaiser Wilhelm II, would have been heir to both the German and British thrones and neither world war might have occurred. Today’s change may have less momentous consequences; it is no less welcome.

In the evening. yesterday, in Perth, the Queen dressed formally, for the CHOGM banquet dinner. 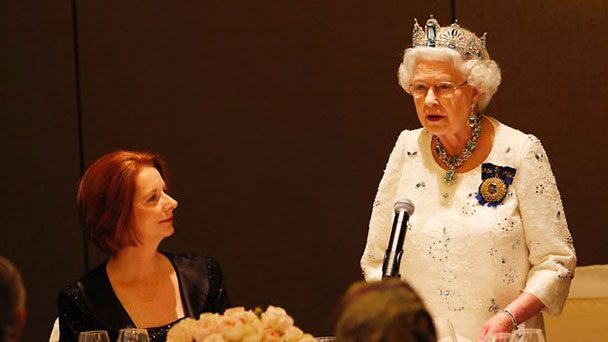