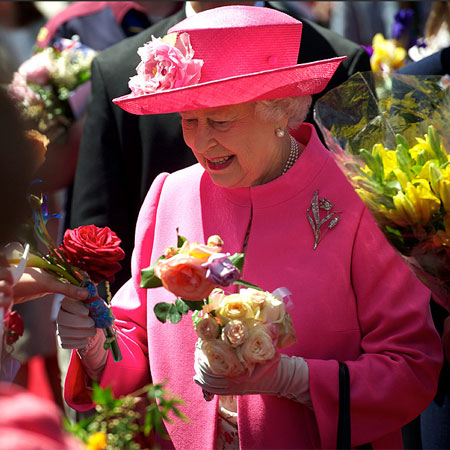 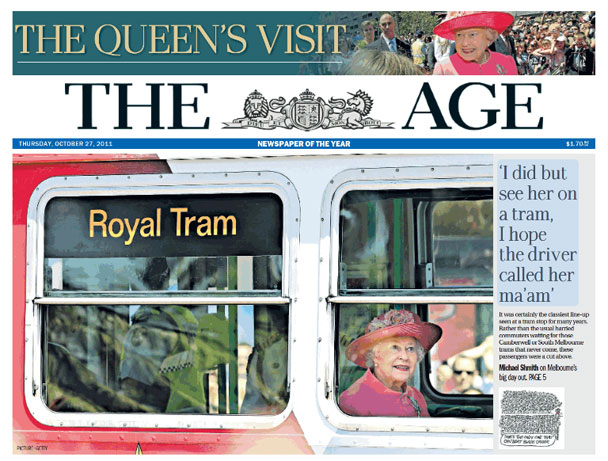 Over the years, articles in The Age have given me the impression that it has republican sentiments.  In fact, I’ve several times read reviews of  TV programs in The Green Guide  Thursday supplement where The Age journalists are so ill-informed about their own country’s Head of State that they have referred to the Queen as Her Royal Highness, instead of Her Majesty.  Now I can forgive this of USA journalists, but I had expected The Age journalists to be more informed about their own country and Queen, and to have done research if they are not sure.

However, I was thrilled to see that The Age gave very good coverage of the Queen’s visit to Melbourne on Wednesday.  The front page next day gave the visit the top headline, as shown above.  I liked the text banner – “I did but see her on a tram, I hope the driver called her ma’am”.  It’s an amusing take on a quote made by The Rt Hon. Sir Robert Menzies, KT, AK, CH, FAA, FRS, QC – the longest-serving Prime Minister of Australia – at a function attended by the Queen at Parliament House, Canberra, in 1963.  Sir Robert quoted the Elizabethan  poet Thomas Ford in saying – “I did but see her passing by, and yet I love her till I die”.

By the way, although The Age seems to have republican leanings, it carries the Royal Coat of Arms at its mast.

Below are pages 4 and 5 from The Age on Thursday, showing its coverage of the royal visit to Melbourne the day before.  The images are taken from the iPad app – an exact replica of the printed newspaper and supplements – to which I subscribe.  I don’t expect you will be able to read any of the text.  I’ve posted the images of the pages only to show that The Age did the royal visit proud, and that I’m pleased with my subscription.  I’ve subscribed to The Age iPad app since just before Christmas 2010.  I soon found that I wouldn’t want to be without it, as I can see what’s going on in Melbourne.  There is a second iPad app which is free until to the end of November.   This app is designed for the iPad and has some great photographic content, and the text of the articles is far easier to read. 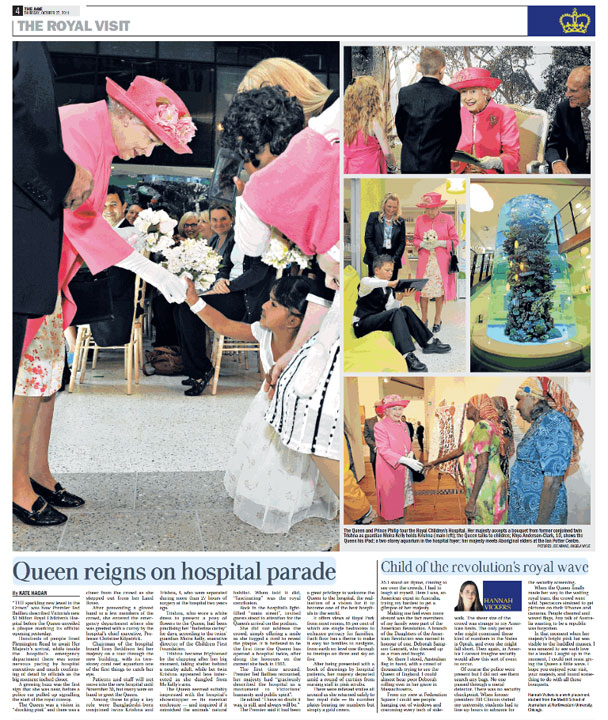 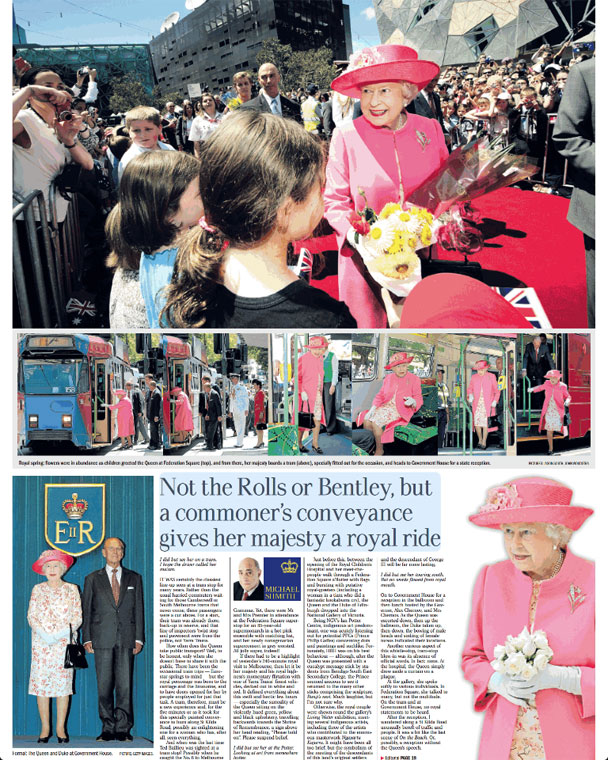 The Times of London published an editorial in its issue yesterday, concerning the royal visit to Australia, and the monarchy.  I’m going to quote it here, as it makes clear that Australia has become a strong, independent modern nation – and doesn’t need to become a republic to establish its status on the world stage.

In a country of Crown prosecutions, royal commissions and money adorned with pictures of the monarch, an 85-year-old woman and her 90-year-old consort are in the midst of 24 engagements in ten days. This is the same country that, 12 years ago, asked its people if they wanted to become a republic. The people declined and, this week, the Queen and head of state of Australia has been greeted by cheering crowds (and just the one man baring his bottom) all over the country.

The most recent opinion poll suggested that 55 per cent of Australians now favour the monarchy and only 34 per cent declared themselves to be republicans. The republican movement — which includes Julia Gillard, the Prime Minister — has, in effect, adjourned the argument until the Queen’s reign comes to an end. There has been some speculation that the Queen’s sixteenth visit to Australia may be her last, although there has been no sign on this trip of any lack of stamina.

Even in Australia, where one in four of the population was born abroad, the continued power of monarchy to bring the nation together has been clearly on display this week. No more obvious was this than in Brisbane where, on a catamaran with the very Australian name of Pure Adrenalin, the Queen and the Duke of Edinburgh, greeted by 45,000 Queenslanders, travelled up the Brisbane River to visit the South Bank district that was devastated by floods in January. In a dignified speech that was hugely appreciated by the crowd, the Queen praised the “resilience and courage” of the people of Queensland.

Wherever the Queen has been — being introduced to a pair of koala bears in Brisbane as if that were an everyday event, opening the Royal Children’s Hospital in Melbourne, laying a wreath at the Tomb of the Unknown Australian Soldier in Canberra — the Queen has added to the lustre left behind by Prince William and Kate Middleton, as they then were, when they visited at the beginning of last year. As the Queen left the war memorial in Canberra, she took gerberas, carnations and roses from 50 children who had been waiting in the rain. “I got a little bit wet,” said Tallula Hindle, 7. “The Queen was very kind. But she has got a bit of an accent.”

The great affection with which the Queen and the Duke of Edinburgh have been greeted on their tour, which ends at the Commonwealth Heads of Government Meeting in Perth tomorrow, is not an outbreak of collective deference.

On the contrary, in the years since the referendum on republicanism in 1999, Australia has grown in international stature and confidence. Those who argued once that Australia needed to throw off its imperial past in order to become a mature, modern nation can no longer pretend that this status has not been achieved. The 2000 Olympic Games in Sydney exhibited to the outside world long ago what most Australians already knew — that they were already comfortable with their status as a member of the family of the wealthy democratic nations.

Republicanism might just be a casualty of self-confidence. Next year will be the Queen’s 60th on the throne. The monarchy enters the year of the Diamond Jubilee in better shape than it has been for a long while. This is true both at home and in those former colonies, such as Australia, which have forged a new relationship with the old country with which they seem comfortable.