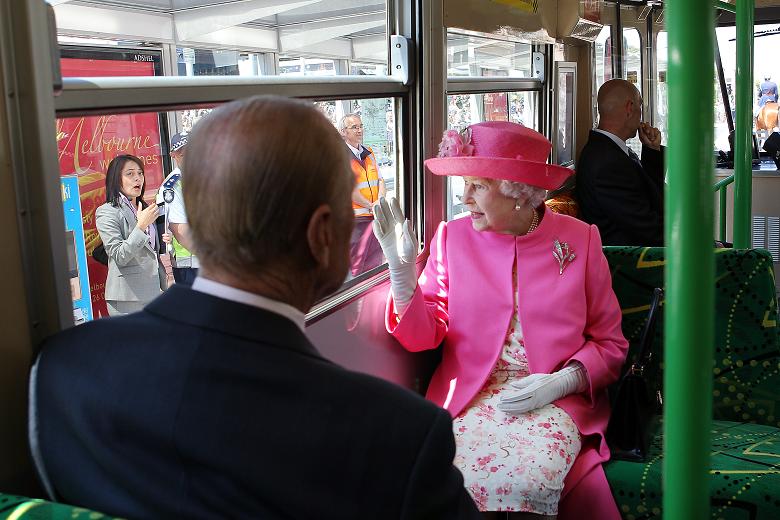 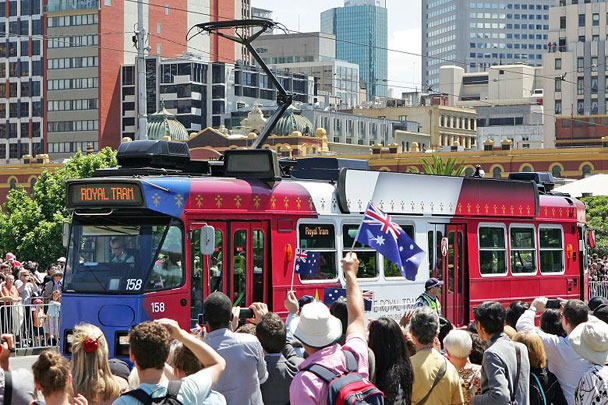 The above photo is from in The Times of London in their online issue on Thursday. 27 October 2011.  I’ve added it to the front of this post because I think it’s a superb photo that captures the whole spirit of the moment that I saw myself, from the other side of the road (St Kilda Road).  The photographer was Scott Barbour of Melbourne – http://www.scottbarbourphoto.com/

This morning the royal party left Canberra and flew to Melbourne.  After a one day visit (4-5 hours), the party then flew to Perth where Her Majesty will officially open the bi-annual Commonwealth Heads of Government meeting (CHOGM) which starts on Friday.   For a short summary of the Queen’s visit to Melbourne today, I can do no better than look ahead and quote from the Court Circular in The Times on Thursday. 27 October 2011, about the Royal Visit to Melbourne today.

Her Majesty and His Royal Highness this morning visited the Royal Children’s Hospital, 50 Flemington Road, Parkville, and were received by the Chairman (Mr. Tony Beddison) and Professor Christine Kilpatrick (Chief Executive Officer).

The Queen and The Duke of Edinburgh toured the facilities including Emergency Department, Cardiac In-patient Ward, Intra-operative Magnetic Resonance Imaging suite and the meerkat enclosure.

Her Majesty unveiled a plaque to open the Royal Children’s Hospital.

Her Majesty and His Royal Highness toured the indigenous art galleries and met artists and students.

The Queen and The Duke of Edinburgh afterwards walked through Federation Square and boarded a tram and proceeded towards Government House.

Her Majesty and His Royal Highness later attended a Reception given by the Governor of Victoria at Government House.

The Queen and The Duke of Edinburgh were subsequently entertained to Luncheon by the Governor at Government House.

I’ve been a devoted subject of Her Majesty Queen Elizabeth II since I began reading about the plans for her coronation since she ascended to the throne in February 1952.  Back then, I was 15 years old, and I used to subscribe to The Illustrated London News and this weekly magazine published beautiful special issues about the Coronation.  It was exciting for me, as a young teenager in a small country town in South Australia, to read about all this grandeur and history, and see the beautiful gravure photographs.  And so it was that I felt compelled to make an effort to see the Queen and Prince Philip, and catch a  train to the city (Flinders Street Station) to arrive opposite Federation Square before the royal party did.  I took the train because I knew there would be road closures and parking problems.  I had made up my mind that even if I didn’t get a glimpse of the Queen, I’d be glad that I’d made the effort, and that I’d enjoy soaking up and being part of the exciting atmosphere.

Once I got to Flinders Street Station, I was amazed by the huge crowds and the police presence and barriers.  I could see that it would be hopeless to cross St Kilda Road at the only two crossing points nearby and try to get a good position in Federation Square.  Later in the day when I watched my TiVo recordings of the visit, I discovered that people had taken up positions in Federation Square as early as 5.30am.  And they were young people in their early 20s.

Because of the crowds I could see across the road in Federation square, I decided to stay under the verandah of the Flinders Street Station.  Here’s my view of Federation Square across St Kilda Road. 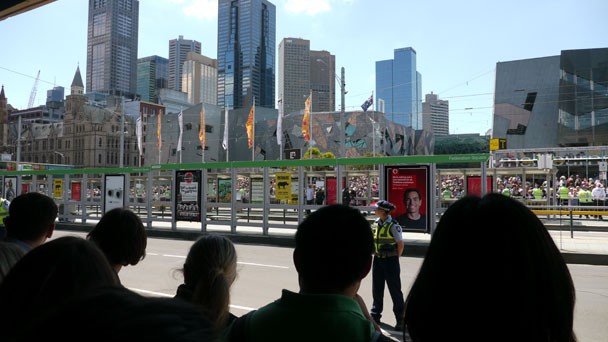 As you can see, it’s a very wide boulevard, and much of the view of the other side of the road is blocked by the long tram shelter with its advertising boards.  Take note of the position of the policewoman face the Station crowds.  Just nest to her cap, on the left as we see it, there is a little bit of bright red.  That’s the red carpet.  You can see it better in the following photo I took with the camera at 10x zoom. 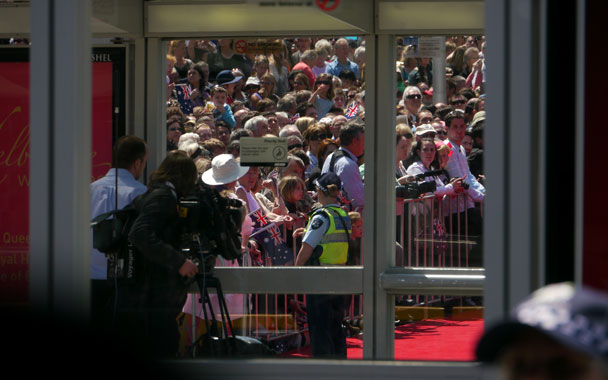 At one stage of waiting for the Queen to arrive, the Royal Tram moved into position further north of my viewpoint, but then it made a short trip down to opposite me.  Perhaps it was just testing – or perhaps it was changing tracks.  I was intrigued to see that to my right, a tram recovery vehicle was standing by.  I took a photo of the tram when it was opposite me. 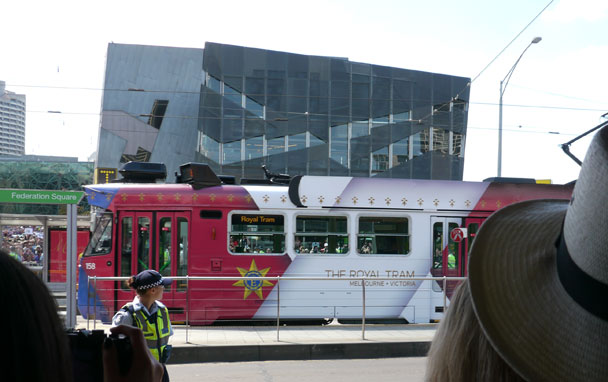 The thing that most impressed me during my wait to see the Queen was the huge and patient crowd that waited to catch even a brief glimpse of Her Majesty.  To be honest I’d come to fear, from reading articles in the Australian media, that the Queen could no longer draw a crowd.   Well, she did that in spades.  And I was delighted to see that most of the people around me were not only young (in their 20s), but many were of Asian and Middle Eastern origin.  Here is a further view of the crowds to my left. 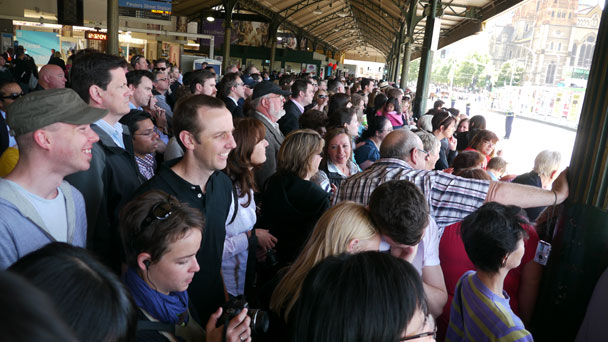 Here’s a video from The Telegraph online, a London newspaper.

The following is a video taken by someone in Federation Square. I was on the other side of St Kilda Road under the verandah of Flinders Street Railway Station, so I didn’t see the Queen this closeup.

Here’s another video taken by someone on the same side of St Kilda Road as I was, but further up, at the corner of Flinders Street. The pan shows the Railway Station frontage, the Cathedral opposite, and the huge crowds trying to catch a glimpse of the Queen. But even if you didn’t see her, it was was worth being there just for the excitement and the atmosphere, which you can’t pick up so well on commercial TV.

This post is a work in progress. I have yet to add the video that I took today. My coverage from the distance is not remotely as good as the videos above, so it will take me a little while, perhaps a week or two, to edit the video to try to make it worth watching.

Please check this post now and again (maybe once a week) to see my video when I’ve added it.