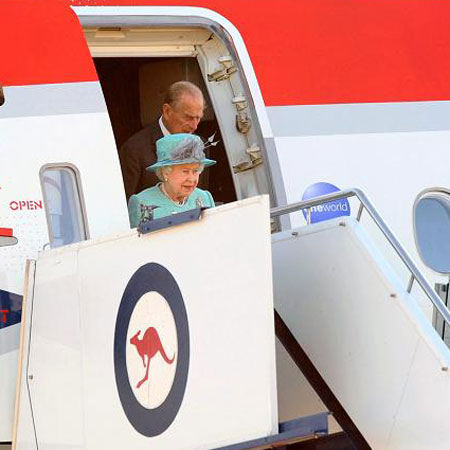 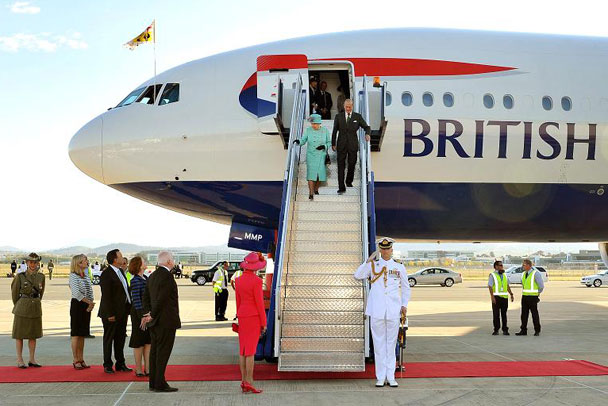 It has been almost three months since I made my last post on this blog.  But today something happened that I just have to comment on.  Her Majesty the Queen and His Royal Highness The Duke of Edinburgh arrived in Canberra, the capital city of Australia, in the Australian Capital Territory.

The photos in this post and the feature photo are from The Times newspaper online today (to which I subscribe).    The following is the announcement relating to the royal visit and to The Queen in the Court Circular printed in The Times today.

The Queen and The Duke of Edinburgh left Heathrow Airport, London, this morning to visit Australia and be present at the Commonwealth Heads of Government Meeting in Perth.

The Princess Royal, on behalf of The Queen, held an Investiture at Buckingham Palace this morning.

This is Her Majesty’s 16th visit to Australia.  The first was in 1954, the year after her Coronation.  I was then in my last year at Mount Gambier High School, and stood on the front lawn of my parents home in Mount Gambier, South Australia as The Queen and The Duke were driven past on the way to the town centre and reception.  I also saw them as they drove past on their way to the airport.  The Royal car was an open Humber Super Snipe.  Brilliant.

Humber cars were special to me.  My father bought a 1960 Humber Super Snipe saloon, and on his death in 1964, my Mother passed it on to me.  I loved that car.

If I ever find the Kodachrome photos my father took of the Royal visit in 1954, I’ll add one to this post.

In the meantime, here’s a small version of a photo my father took with his Nicca 35mm rangefinder camera (a Japanese copy of the Leica of the day) at Vansittart Park, with the Mayor of Mount Gambier. 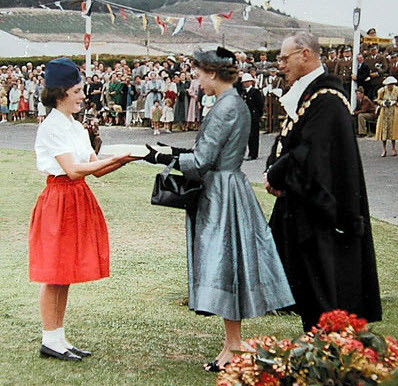 And to finish off, here is another photo taken today, from The Times online. 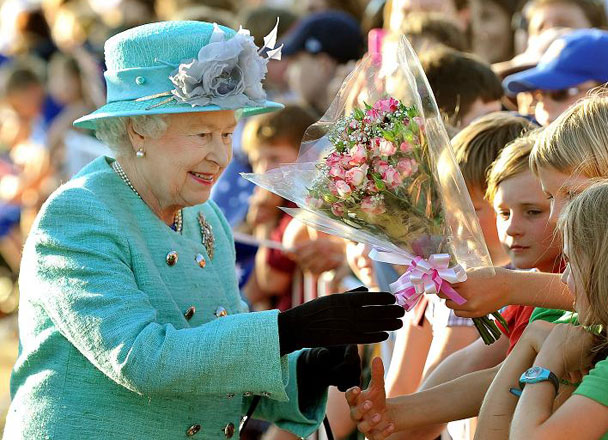 As a side note I’d have to say that at age 73 I’d freak out at the prospect of walking down such a long and steep stairway from the aircraft.  But the Queen at 85, and the Duke at 90, didn’t bat an eyelid, and took it in their stride.