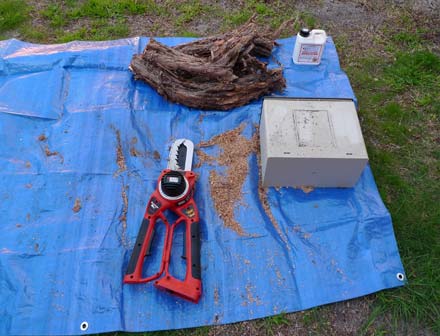 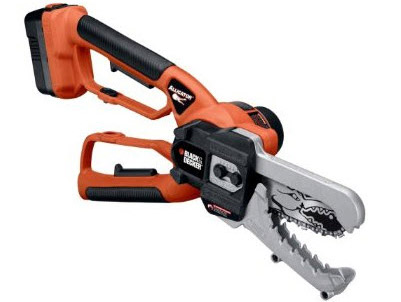 Now I have my chainsaw …

As you can see, it’s not like other chainsaws.  It looks more like shears with its handles and jaws.  It’s the Black & Decker Alligator Lopper.  It’s electric cordless with a rechargeable, removable battery. 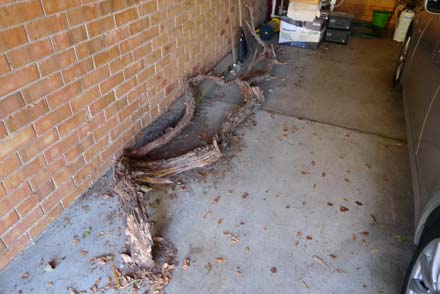 The photo speaks for itself how quickly the chainsaw managed to cut up the first trunk.  I’m calling it a trunk as it grew out of the ground in a large shrub, which has to such trunks.  I cut up the other trunk a week or so later and it was just as easy to deal with, even though the base of the trunk was a good deal thicker than stated capability of the chainsaw.  All I did was make several cuts from different sides of the trunk so that the cuts joined up.  This was easier to do that I thought it would be, because the chainsaw makes a much wider cut than a hand saw, so it was easy to match up my cuts.

All in all I’m very impressed by this product and very pleased that I bought it.  One of the things I like is that it’s so easy to use, and it feels safe.  Obviously, as with a sharp kitchen knife, you need to be take sensible care when using it, and keep your mind on the job.  I bought the full kit of  helmet, ear muffs and eye protection (the gloves I already had) but I found in practice that I only needed the gloves and eye protection when cutting up wood that could not fall on me.

Also, the hardware store sold me chainsaw oil.  I didn’t realise there is a special oil for chainsaws.  It’s quite viscous compared with sewing machine oil.

See Part II of this post on 18 October 2009.  It includes videos of the chainsaw being used.  Very impressive.