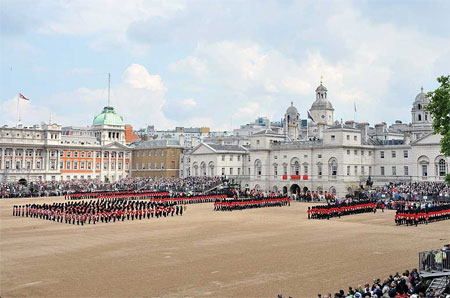 It’s the Queen’s Birthday long weekend in Australia (except for WA) with a public holiday on Monday.  In Western Australia, the State Governor proclaims the date on which the public holiday will be held.  Usually it’s the last Monday in September or the first Monday in October.  However, in 2011 the date of the Queen’s Birthday public holiday has been changed  to Friday 28 October to coincide with the Commonwealth Heads of Government Meeting (CHOGM) which will take place in Perth, WA, during the week of 23 October to 30 October 2011.  The Queen and Duke of Edinburgh plan to visit Perth from 28-30 October for the Meeting, and the Queen’s Birthday long weekend will therefore coincide with their visit.

In London, the Trooping of the Colour is held on the second Saturday in June – the traditional date for the official celebration of the Monarch’s birthday – no doubt to take advantage of the weather at the beginning of the English summer, when good weather is more likely.  The rehearsal takes place two weeks before, on the last Saturday in May.

In 1993, I felt very privileged to see the rehearsal on my first day in London, in my first overseas trip.  I arrived at my hotel in South Kensington before 7.00am from Heathrow, and was told my room would not be available until 1.00pm.  So I went for a walk.  I asked a female police officer why there were so many police around, and she told me it was because of the rehearsal of Trooping the Colour.  And by wonderful good luck, two weeks later on my last day in London, I saw the actual event with the Queen in the procession to and from the trooping ceremony, and the royal family on the balcony of Buckingham Palace.

The gun salute in Hyde Park was very impressive.  It was a bit like the chariot race in Ben Hur.   In  this case, the horse teams rushed in with the gun carriages in tow, to be arranged as quickly as possible.  At midday the guns fired the 41-gun salute, and then were packed up and rushed off just as quickly.

Prince William took a role at this year’s event for the first time.  He’s somewhat hidden by his busby. 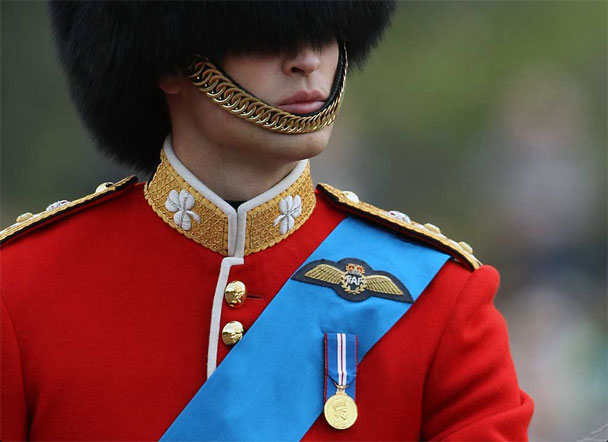 The above photo is from The Telegraph (London newspaper) iPad edition.  As yet I don’t subscribe to the iPad edition, because I enjoy browsing and reading  The Telegraph online at http://www.telegraph.co.uk/.   However, the app allows the user to subscribe by the month, or to buy individual editions which is what I did on this occasion.

If you’d like to know more about the ceremony of Trooping the Colour then this video will help to explain it.  The early background music brings back the most wonderful memories of my visit to London in 1993.   Similar music is often part of the TV series Lewis (post Inspector Morse).

I wish Her Majesty a very happy birthday and many more to come.  And I hope I’ll be there to see them.

It is, of course, a belated wish. Her actual birthday is on April 21.

Tonight I found a YouTube video of the full ceremony in 2011, with information about the army participants and comments from some of them. So please enjoy it.  Be sure to increase the quality to the best that works for you, and watch it full screen if this works for you.

The next video picks up on the end of the previous video and then continues until the fly past.  It includes the spectacular 41 gun salute by the King’s Troop in Green Park.  It’s not the salute itself that is spectacular, but the fact that the guns are horse draw and arrive at great speed, and are set up quickly, and then removed just as quickly after the salute.  I saw this myself at close range during my visit to London in 1993.  To be honest, it was a bit frightening the way the horses and gun carriages rushed past me.  This is not shown in the video.