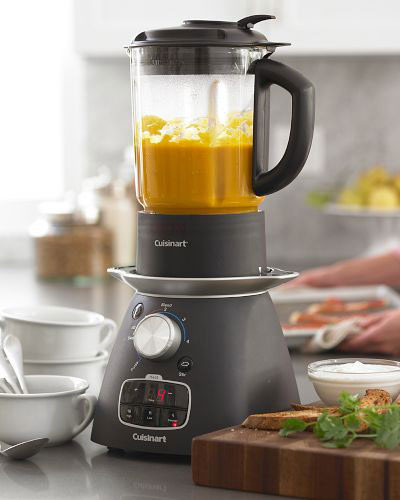 When I wrote my first post about the Cuisinart Soup Maker / Hot & Cold Blender, there is no doubt that I was thrilled by it.  All I had to do was put veg into the blender, add stock or stock powder, spices and herbs if desired, top up with stock or water to the 1400 ml mark, and set the blender timer to about 28 minutes, then start heating to bring the contents to the boil, which took about 8 minutes or so.  Once a vigorous boil had been reached, I would press the “Simmer” button, adjust the timer to 20 minutes if need be, and the blender would then very gently simmer the contents.  Several times during the process I would press the “Stir” button for a few seconds.  When the timer reached zero, the blender would then turn off.  Any time after that I could use the blender to blend the soup to as near as I could get to a puree.  Unfortunately, there would always be some lumps in the soup, be it potato, parsnip or mushroom stalks.  I tolerated the lumps because they were, after all, little pieces of good healthy cooked vegetables.  However, I was disappointed in the performance of the appliance as a blender, because I did my best to make sure there were no lumps by using pulse, and all the speeds the blender has to offer.

Almost four weeks ago, my honeymoon period with the Cuisinart Soup Maker / Hot & Cold Blender came to an abrupt end.  I was making a soup and had set to the timer to 28 minutes as usual.  When the timer got close to the 20 minute mark I stood in front of the blender to keep a very close watch on it to be ready for the moment it came to a vigorous boil, and press the Simmer button.  However, as you no doubt know, there is an old saying that a watched pot never boils.  And this proved to be the case.  The liquid just wouldn’t come to the boil while I watching it.  Then I got distracted for maybe 30 seconds, or a minute at most, and the next thing I knew the liquid was shooting out of the top of the blender and making a terrible mess on the counter-top.  It took about 15 minutes to clean up the mess which got into and under everything within reach on the bench.

To add insult to injury, the final soup had more lumps in it than usual, and I found that it gave me some tummy discomfort every time I had it.  In the end I threw the remainder out and haven’t made soup since.  To be fair, I should mention that I had been having tummy discomfort since the week before Easter, and I had to be very careful what I ate.   Simple food worked best.  My tummy discomfort after having the soup could have been from the wholemeal or multi-grain bread, toasted, that I’d eaten with the soup.  I soon afterwards switched to light and white breads such as Vienna loaf, and my tummy has been fine since.

Today I read somewhere that the old food pyramid showing how much we should eat of what, each day, is changing.  Grains are no longer held in such high regard, because for some people they cause sickness.  I don’t want to get into that, but it struck a chord with me because of my recent experiences.  My tummy troubles ended when I switched from Brumbies wholemeal and grains breads to their white breads such as Vienna loaf, French Stick, and Ciabatta.

Coming back to the Cuisinart Soup Maker / Hot & Cold Blender, I have to say that after the overflow four weeks ago when it came to the boil, and the lumps after blending the cooked soup with the blender as best I could, I’ve concluded there are better, quicker, cheaper and surer ways of cooking soup.   I’ll make a post on this when I find the time.  But in short, using the Cuisinart Pressure Cooker to cook the soup and the Kenwood TriBlade Hand Blender to blend it, is the answer.

Just put the ingredients into the pressure cooker, lock the lid on, set the timer for the cooking time – maybe 8 minutes (instead of 20 minutes) – and the cooker will take care of everything, and switch off when it’s done.  The cooker doesn’t start timing until it reaches the desired pressure, then it reduces the heat to maintain pressure throughout the cooking.  The Kenwood TriBlade blending attachments with plastic feet are ideal for the non-stick interior of the pressure cooker.  They can blend everything without any lumps.

Despite the above, I still think the Cuisinart Soup Maker (as called overseas) or Hot & Cold Blender (as called in Australia) is a fine product.  I was so pleased with it that this is what inspired me to buy the Cuisinart Pressure Cooker.  With the benefit of hindsight, I think the pressure plus Kenwood TriBlade blender set is the better combination to make soup.  The two products together are about the same price as the Cuisinart Hot & Cold Blender, and they are of course much more versatile.  I cook my corned beef in the pressure cooker, and it’s great for cooking rice in 3-4 minutes, or risotto in 7 minute (with no stirring).  But again, I’ll make a post on that when I get the time (and inspiration).