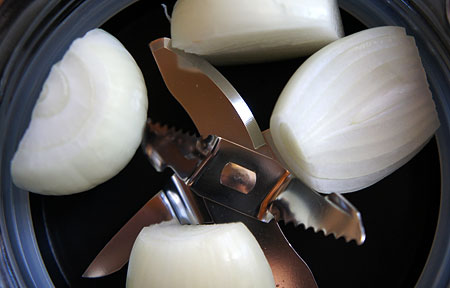 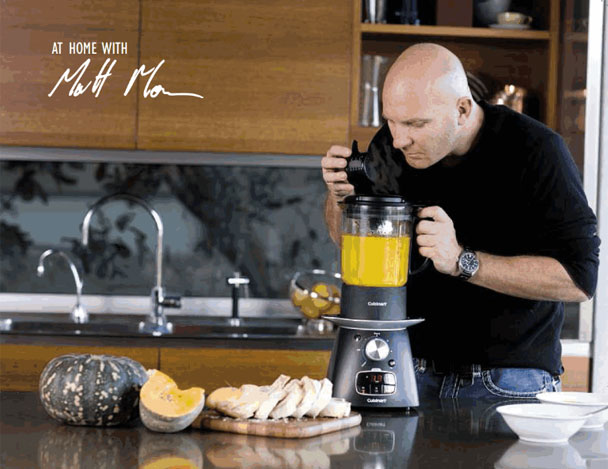 Today, the Good Weekend supplement to The Saturday Age contained a full page advertisement for the Cuisinart Hot & Cold Blender (called Cuisinart Soup Maker in many other countries).  The photo above is from that advertisement – the rest of it is at the bottom of this post.

The first I heard that such an appliance existed, was almost five weeks ago, when I received an email from Kitchenware Direct in Perth, WA, with a photo and details of the product.  I think it was love (or desire) at first sight for me.  I wanted it. But I resisted buying it for a few weeks, as my brain told me that (1) I can cook soup in a saucepan or pressure cooker, and (2) puree it in the pot with a hand held blender.

My resistance faded when a few weeks later I received a card in the post from David Jones advertising discounts for card holders that week.  The offer included 20% off all electrical kitchen appliances.  That offer was too much to resist.  I decided to trust my instinct and give the appliance a try, so I bought one.

The featured image on the home page of my blog shows two onions cut in half at the bottom of the blender.   The image below shows a segment of pumpkin, like the one in the advertisement photo above, in the bottom of my blender. 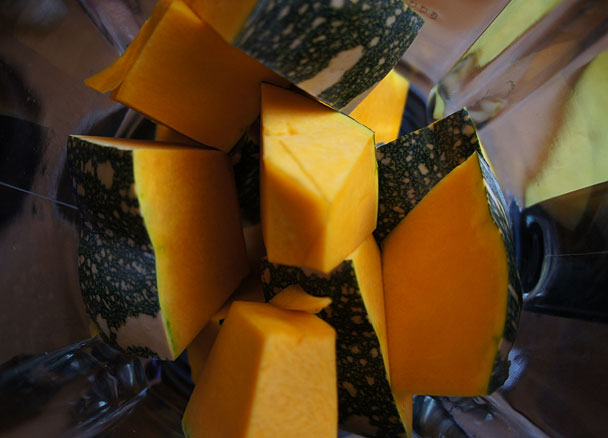 In the past two weeks I’ve made soup four times using the Cuisinart blender, and it’s been a taste delight each time.  That’s full credit to me because of having some experience over the past year in making my own soup, and also thinking about what I’m doing, as to how it might affect taste.  But in my mind, it’s also a major credit to the Cuisinart appliance.  The glass blender and 1400 ml limit for soup is for me, a great guide as to how many vegetables pieces to add to achieve the result I want.  I can see through the glass what I’ve added, and then how much stock, or water (with stock powder already added) to reach the 1400 ml level.

Over the years I’ve enthusiastically bought many appliances, pots and pans that have turned out to be a poor choice, and of no use to me after the novelty has died off.  But this appliance is looking like being a winner for me.

Check out the videos at the end of the above video.

In the coming weeks I’ll make posts about another Cuisinart appliance that has won my great respect.