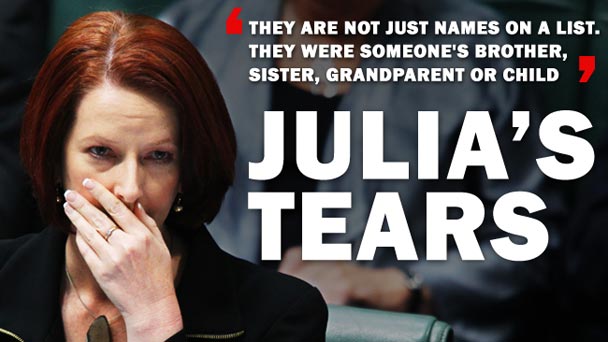 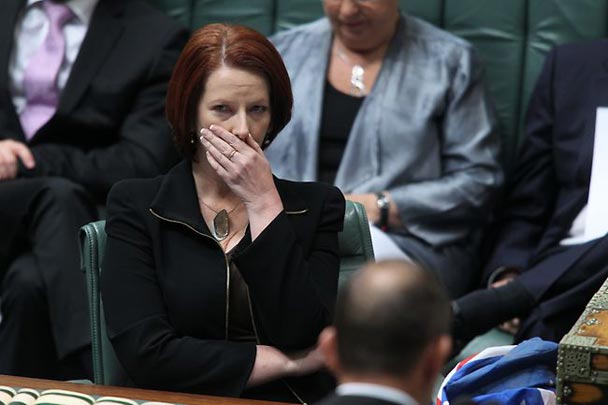 When I wrote my 4th post about the little hero (Jordan Rice), headed “farewell” and showing a scene from his funeral service, I thought that was probably the end of that sad story. But his story and the heroism of many others, and the tragic loss of life once again made national headlines today, when in Federal Parliament this afternoon, the Prime Minister and the Leader of the Opposition paid tribute to the victims of the Queensland floods.

The following extracts are from The Age (Melbourne) and The Courier Mail (Brisbane).

Prime Minister Julia Gillard fought back tears in a rare show of emotion as she addressed Parliament this afternoon, choking up as she described the impact of floods that have ravaged the country.

Ms Gillard has long built a reputation as a feisty and combative parliamentary performer, but today allowed a more vulnerable side into the public glare.

Her voice broke and her eyes welled up as she led condolence motions for the 35 people who died in the Queensland floods, one in NSW and one in Victoria. Seven people remain on the missing list.

When people and communities were back to full strength the dead would not be forgotten, Ms Gillard said.

”They are not just names on a list,” she said. ”They were someone’s brother, sister, grandparent or child.

As she recounted the story of Jordan Rice, who was killed with his mother Donna, Ms Gillard’s usually controlled demeanour faltered.  The teenager had saved his brother’s life instead of his own and was washed away with his mother.

Opposition Leader Tony Abbott put politics aside to pay tribute to Ms Gillard and her efforts to be with those affected by disasters in several states.

“Whatever political disagreements we may have, she has shown a decent heart,” Mr Abbott said.

Mr Abbott said Jordan’s actions would be remembered by this generation as similar to the actions of John Simpson Kirkpatrick and his donkey on the shores of Gallipoli. Simpson gained fame for fearlessly rescuing the wounded from the battlefield at Anzac Cove with his donkey.

“Of all the acts of heroism there was none more emblematic of the Australian spirit than that of Jordan Rice,” Mr Abbott said.

Mr Abbott said he hoped Jordan would be considered for a posthumous cross of valour.

Ms Gillard said she had sought approval from Queen Elizabeth II to introduce honours for Aussies “who have gone out of their way to extend the hand of mateship during times of crisis”, to be known as National Emergency Medals.

“Next Australia Day I’m confident we will present our first awards to those who have performed heroic and selfless acts and volunteered their services across Australia,” she said.

The home page photo is from The Courier Mail, and the photo above from the Herald Sun (Melbourne).