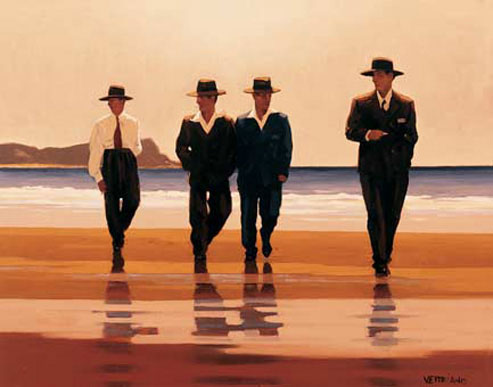 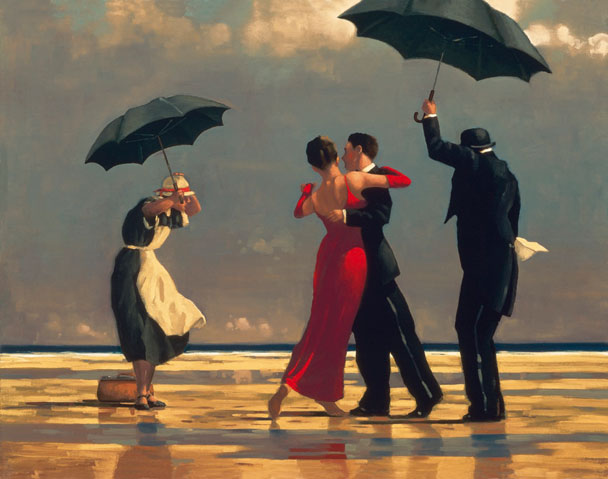 Over the past 9 years I’ve liked to buy cards featuring the works of Jack Vettriano to send on special occasions.   The cards are blank inside, and can therefore be used for any purpose, including short letters of thanks.  To be honest, I’d never heard of Jack Vettriano until I saw the cards with his paintings at a bookshop in Malvern, in 2002 and bought a handful of them, all with different paintings.  I remember the year because I used the cards to write thank-you letters to the Chairman of Foster’s and Deputy Chairman who had expressed special wishes when I retired in 2002 (on 1 November), when I was a young boy not yet 65.

The family name “Vettrianno” convinced me that the painter was Italian.  But the first name “Jack” lead  me to assume that he was probably American-Italian and no doubt lives in New York – or perhaps in the Windy City – Chicago (where many other Italians, such as Al Capone, have lived).

Jack Vettriano is one on the many artists whose works are featured in the iPad app called Art Authority.

By the way, what would you think the painting above is called?  If I told you, I don’t think you’d believe me.  So do a Google search for The Singing Butler and you’ll find the painting.  I now quote from Wikipedia:

On 21 April 2004 the original canvas of The Singing Butler sold at auction for £744,500 — in stark contrast to 1992 when Vettriano painted the picture and submitted it for inclusion in the Royal Academy summer show, only to be rejected.

As it turns out, Jack Vettriano is not Italian or American.  He’s not from New York, or Chicago, or even from Sicily.   He’s from Fife in Scotland.

And his title is Jack Vettrianno OBE.