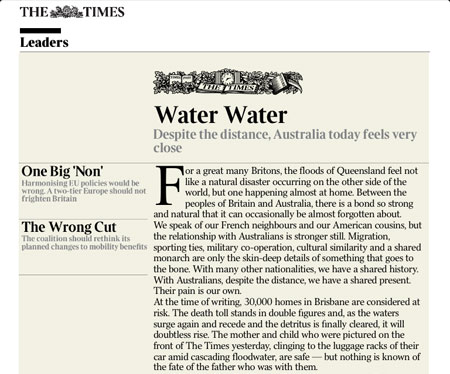 The following is an Editorial that appeared in The Times on 13 January, 2011.

This is from the same newspaper that delighted a few weeks ago in reporting how England had won the recent Ashes cricket series against Australia, and retained The Ashes.  But this is also the same paper that has given extensive coverage to the Queensland floods in the past week and has run the story of “the little hero” every day.

I quote the Editorial in full (once again to give visitors to my site a glimpse of what they missing out on by not subscribing to The Times):

For a great many Britons, the floods of Queensland feel not like a natural disaster occurring on the other side of the world, but one happening almost at home. Between the peoples of Britain and Australia, there is a bond so strong and natural that it can occasionally be almost forgotten about.

We speak of our French neighbours and our American cousins, but the relationship with Australians is stronger still. Migration, sporting ties, military co-operation, cultural similarity and a shared monarch are only the skin-deep details of something that goes to the bone. With many other nationalities, we have a shared history. With Australians, despite the distance, we have a shared present. Their pain is our own.

At the time of writing, 30,000 homes in Brisbane are considered at risk. The death toll stands in double figures and, as the waters surge again and recede and the detritus is finally cleared, it will doubtless rise. The mother and child who were pictured on the front of The Times yesterday, clinging to the luggage racks of their car amid cascading floodwater, are safe — but nothing is known of the fate of the father who was with them.

As with any unimaginably vast disaster, it is on the smaller human tragedies that the mind more easily fixates: Sylvia Baillie, a 73-year-old grandmother from Postman’s Ridge, swept away after returning to her house, with a rope tied around her waist, to rescue treasured photographs; Jordan Rice, a 13-year-old boy lost along with his mother, Donna, after insisting that rescuers take his brother Blake, 10, first. By now, there will surely be many more. Many Australians live in Britain, many Britons have family and friends living in Australia. Yet for all our easy familiarity with Australians, the country in which they live itself can seem dauntingly foreign.

Half of it is tropical. Those affected by floods are already being warned to boil water to avoid E. coli. Flooded homes may harbour poisonous insects and snakes. There have even been reports of a shark in the floodwaters of a residential street in the Brisbane suburb of Ipswich.

Already, with the bleak irony inherent in all floods, residents are being advised to conserve water in case treatment plants fail or reservoirs become contaminated. JP Morgan has estimated that the eventual cost of the floods could be as high as 1 per cent of GDP.

In Britain, the wilderness begs the cities for space. In Australia, the reverse is true. The great triumph of that nation is that it has neither squashed this frontier spirit nor over-indulged it. Instead it has incorporated it into a distinctive national character. This makes for an enviable robustness. Yesterday, one official noted that it was not merely supermarkets that had been emptied by residents preparing for disaster, but liquor stores, too. Perhaps, she speculated, people were fearful for the future of Brisbane’s XXXX brewery.

The same dogged strength was evident on the streets. The Australian interviewed Scott Richards, a 39-year-old father of two toddlers, as he loaded the contents of his flooded, uninsured home into a dinghy. “Hell of a way to treat the new kitchen,” he remarked.

Australia will benefit from this characteristic fortitude in the months to come. As Charles M. Schulz, the creator of Peanuts, once quipped: “Don’t worry about the world coming to an end today. In Australia, it’s already tomorrow.”