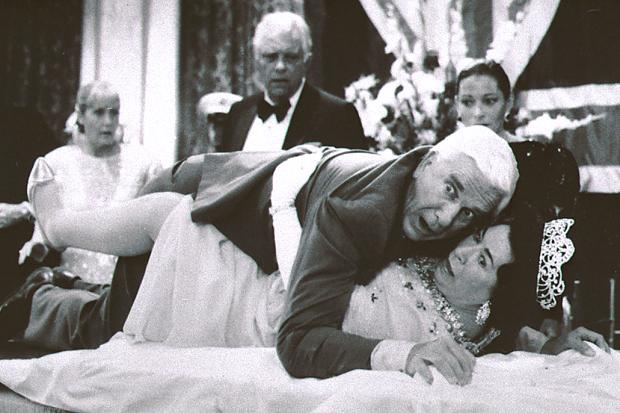 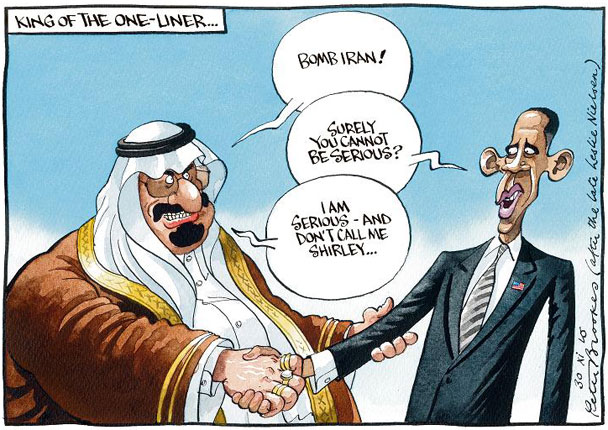 Today’s issue of The Times includes an obituary for Leslie Nielsen, OC.  Elsewhere in the paper is the above cartoon which covers two events:  (1)  It comments on the news report this week that, according to US diplomatic cables leaked by the website WikiLeaks, America was repeatedly urged in 2008 by King Abdullah of Saudi Arabia to bomb nuclear facilities in Iran “to cut off the head of the snake”.   (2)   The final line in the cartoon, “Don’t call me Shirley”, is paying a tribute to Leslie Nielsen and a line he spoke in one of his movies.

Here is an extract from The Times obituary which explains it:

His early credits include the commander in the 1956 sci-fi classic Forbidden Planet and the captain of the ship in the original 1972 version of The Poseidon Adventure. His career took a dramatic change of direction in 1980 when he played Dr Rumack, the hopelessly logical, but rather dim doctor who takes control in an airborne crisis in Airplane! “This woman has to be gotten to a hospital,” he says. “A hospital! What is it?” says the stewardess. “It’s a big building with patients,” Nielsen replies.

Although it looks likely that the plane is about to crash and everyone is going to die, his character’s greatest concern seems to be the way in which everyone keeps calling him Shirley — “Don’t call me Shirley”, when in fact he repeatedly mishears the word “surely”.

I suppose I first saw Leslie Nielsen in early TV shows, and then in the 1956 movie Forbidden Planet, but he first came to my notice in Tammy and the Bachelor starring Debbie Reynolds.

In 2002 he was made an Officer of the Order of Canada (hence the OC after his name).

Here’s a great photo from The Times (yes, I’m thrilled with my subscription, and I hope to arose your interest).  Leslie Nielsen as Lt. Frank Drebin in “The Naked Gun: From the Files of Police Squad!” 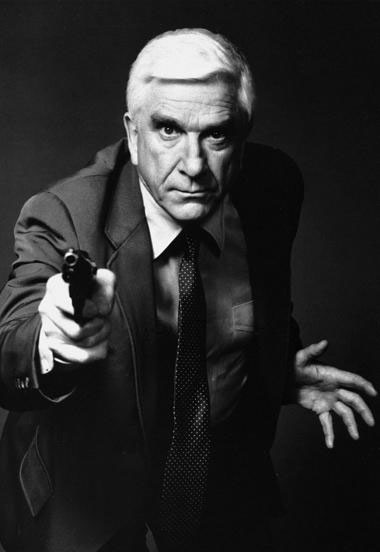