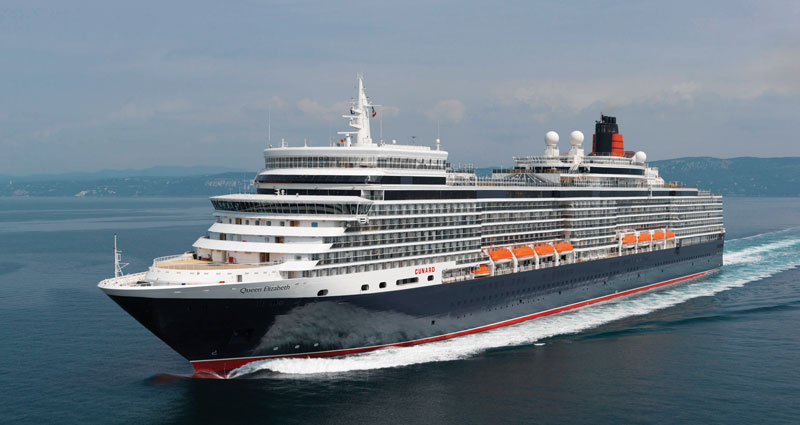 This beautiful ship is due to be named and launched by Her Majesty Queen Elizabeth II at Southampton tomorrow.

Monday 11 October from 3.25pm
Watch Her Majesty Queen Elizabeth II name this glorious ship and enjoy the ceremonial events broadcast live on a big screen in the newly refurbished Guildhall Square. The live screening will be preceded with the short film ‘Your Cunard Holiday to America’ (provided by Wessex Film and Sound Archive) which describes travel on the the new liner’s predecessor, the QE2.

The video of the naming ceremony can be watched at Cruise Critic.

Some very interesting videos can be seen at the ship’s video gallery and these include the unveiling of the portrait of the Queen at the National Portrait Gallery.  The painting will hang on board the ship in the Grand Lobby.  The Queen will see it and the artist when she names the ship tomorrow.

All the videos can be seen full screen by clicking on the 4 red arrows at the bottom right of the video frame.

I quote here from today’s issue of The Sunday Times (of London), to which I subscribe:

The ship everyone will want to experience in 2011 is Cunard’s new Queen Elizabeth. A worthy successor to the poor old QE2, last seen rusting in a container port in Dubai? We shall see when she’s named by the Queen next month and sets out on her maiden cruise. The current buzz centres on the two-deck-high Viscount Linley marquetry panel that will dominate the lobby; and the full-time theatre company, the first of its kind at sea, which will offer something a little more uplifting than the usual cheesy shows — Shakespeare (Twelfth Night) and Neil Simon (The Odd Couple), for starters. We’re tempted by the first ocean-going branch of Fortnum & Mason. Judge for yourself once the fuss has died down on a suitably patriotic progress around the underappreciated (in cruising terms, at least) British Isles on September 2. Good value, too — from £1,382 for 10 days with Cunard (0845 678 0013, cunard.com).

Here’s another quote from The Sunday Times today:

They’re launching just a couple of months apart, but if you want a picture of the extremes of cruising, you couldn’t do better than the sedate, traditional Queen Elizabeth and the raucous megaliner Allure of the Seas, writes Stephen Bleach.

The first breaks no records — that would be crass; the second, which starts sailing in December, is the biggest cruise ship ever (they made it 5mm bigger than its sister, Oasis of the Seas, just so it could nab the title).