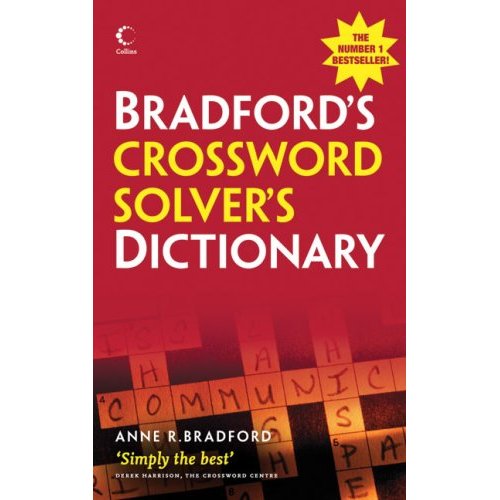 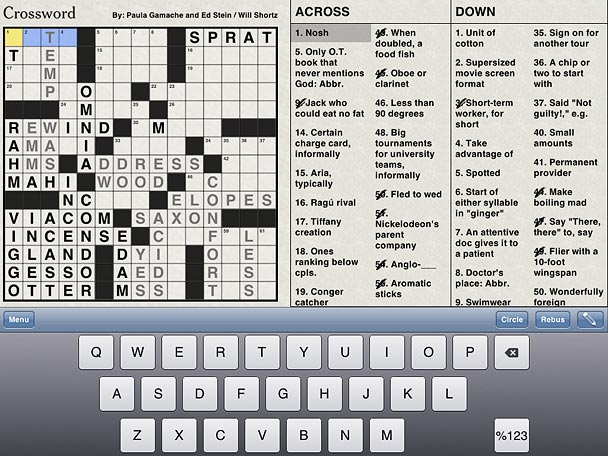 Late Sunday night, for some unknown reason, I bought a crossword puzzle app for my iPad.  I’ve no idea what brought this on, because I’ve always been hopeless at doing crossword puzzles and I’ve therefore had no interest in them.

The thing is that I’m having a fresh look at crosswords now that I have an iPad and iPhone that have apps that can help solve clues – such as dictionaries that can do wild card searches, Google and Wikipedia apps.

I’m only one day into this new interest and I’m not sure how long it will last, or how long I’ll let it last.  I spent a large part of today involved doing crosswords in three trial apps, instead of spending the day as planned.   The New York Times app puzzle for yesterday is shown above.  This is a free app, but after 7 days you have to subscribe to get puzzles for the app.  This is typical of all newspaper crosswords to access them online.

In the past I’ve never been able to do crossword puzzles, probably because I’d never thought about why they are called puzzles and why the Across and Down clues are called “clues”.   I think I’d assumed the clues were just a list of general knowledge questions to which I had to provide answers, if I knew them.

No wonder I had so much trouble trying to solve them.  I could only do the entries which were fairly straight questions.

I’m now starting to get the hang of the general idea, but I have lots to learn, and I’ve fund that as with playing Hangman, I have to become more lateral in my thinking.  For example, one clue I encountered today was “Editor’s strikes (5)”.  My initial thoughts were that it might have something to do with an editors strike in the USA.  Then I decided it was more likely to be marks that an editor makes on drafts.  But I had no idea what any such marks were called.  After a time, I completed adjoining parts of the puzzle (on my iPhone) that gave me the last 3 letters of the word – ..UTS – so I did lots of wild card searches and couldn’t come up with a word that worked.  Later on I’d narrowed it to – .OUTS – but my many wild card searches still didn’t come up with a word that worked with the clue.   I should have paid more attention to the clue, and the word “strikes”.

Just imagine an editor reading a draft article and he makes a strike.  It’s not a small correction or change, but a strike with his pen.   Try it.  You are the editor and your left hand’s palm is the page, and your right hand holds the pen.  Make an editing strike to a paragraph on the page.   How would you describe it?  You crossed something out.   The plural form is cross outs.  And how do you mark a cross on a voting paper, survey etc.  With and X.   The answer:  XOUTS