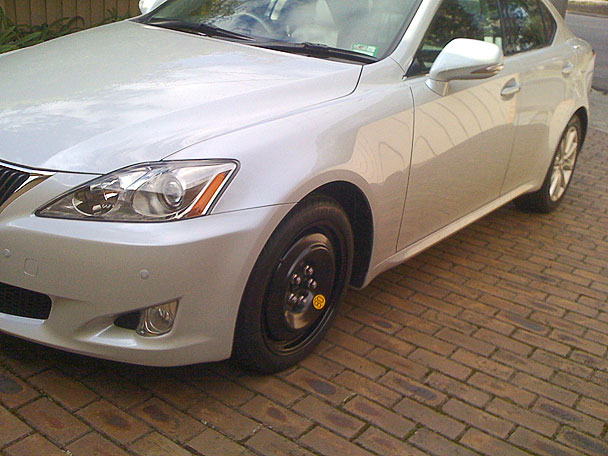 Yesterday I called Lexus Roadside Service (read RACV) to check out a flapping noise, which seemed to come from the rear passenger side wheel. In the end the RACV engineer walked alongside my car while I drove it slowly, and he discovered that the problem was actually with the front passenger side wheel. It turned out to be a large bolt and washer buried in the tyre tread.

The RACV guy kindly fitted the space-saver wheel, as shown above, and I drove the car to Lexus where they fixed the punctured tyre, and replaced the wheel.

To put this in context, if this is the worst problem I’ll have this year, I’ll be very grateful. But the whole thing was very disappointing and disconcerting to have to call roadside service and take the car for urgent repairs while it’s still on it’s first tank of fuel.

That said, my initial impressions of the car are that I am enjoying the actual driving experience more than in any other car I’ve had since my 1957 Holden FE, and later, the 1960 Humber Super Snipe that I inherited in 1964. These are cars in which I drove about 10,000 miles a year – not a mere 6,000 kms in 4 years.

One thing that has surprised me is that I’ve noticed the new car has a noticeably more comfortable ride.  The 2006 car had a very hard and jarring ride in the local suburban side streets as it passed over minor irregularities in street surfaces (but it was quite smooth on main suburban roads).  The new car travels smoothly on the same suburban side streets.  I mentioned this to the young lady who was arranged the tyre repair on Monday, and her reply surprised me.

She explained that my 2006  Sports Luxury was fitted with Bridgestone tyres, whereas my new car is fitted with Dunlop tyres – and that is the reason for the difference.  So how’s that?