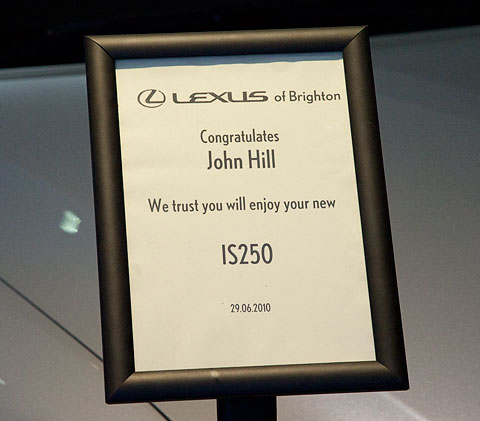 As I drove my four year old 2006 Lexus IS250 Sports Luxury into the Lexus of Brighton delivery area this afternoon, the odometer reached 6300 kms exactly.

My new car was awaiting me in the showroom. 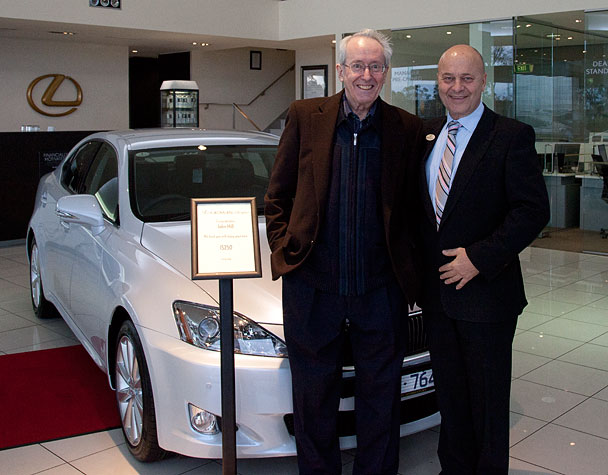 That’s me with Bernard (accent on the second syllable, please, as he’s originally from France) in front of the new are. It’s Bernard who managed to convince me to make the changeover, only 12 days ago. I had taken my car to Lexus of Brighton for its annual service. When I returned in the early afternoon to collect my car after its service, I wandered over to the showroom to see the latest IS250 model. I said I was “just looking” but Bernard explained to me how I could upgrade to the latest IS250 for a relatively modest cost (far less than I expected). 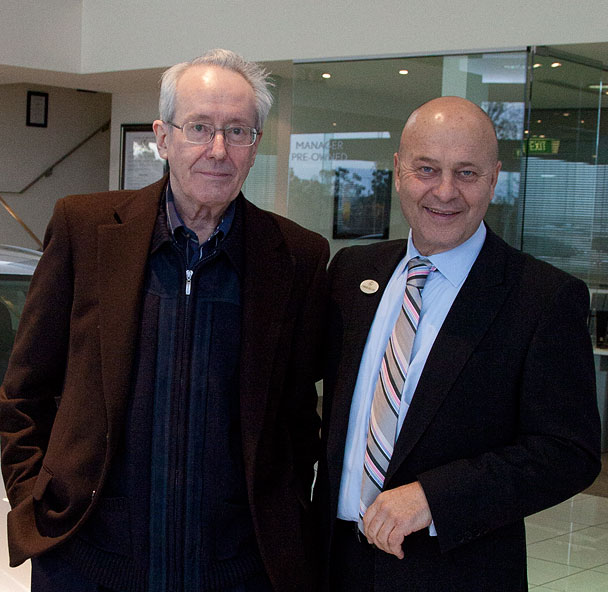 Bernard and me. The lovely Jessica, the delivery co-ordinator, took the above photos with my Canon 5D MkII and L series 24-105mm lens. 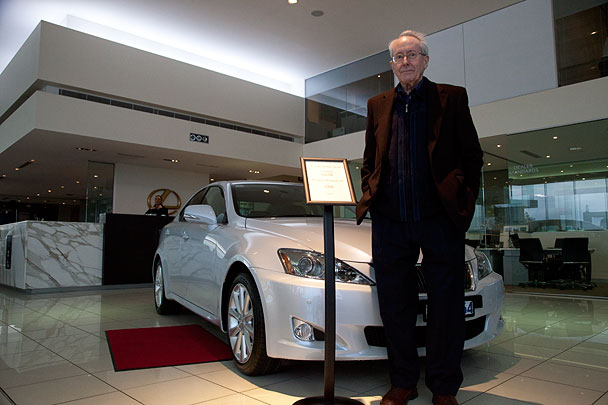 Bernard took the photo above.  He chose an interesting angle to take the photo, which I like.

I’m trying to help Bernard create his own blog site, as he has many more interesting things to write about than I do.

For the record, part of  the delivery process included spending time with Mary who looks after the finance process (bank cheque in my case) and she arranged the car changeover to my motor car insurance.   I get a $148 refund from AAMI.

Then, young Josh spent about an hour with me explaining all the features of my new car, the differences between the new car and my previous car.

You might be getting the message that owning a Lexus is an experience.  I now have another four years of Encore Privileges – theatre tickets, valet parking at the Arts Centre, sports events, dining events, magazine, free loan car when my car is serviced, and a monthly car detailing inside and out, by appointment. And I won’t have to pay for a car service until June 2012. 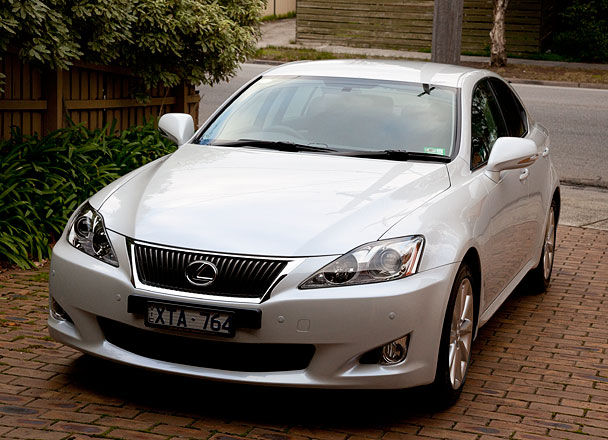 The turn indicator lights on the side of the car near the front have now been moved to the door mirror housings. 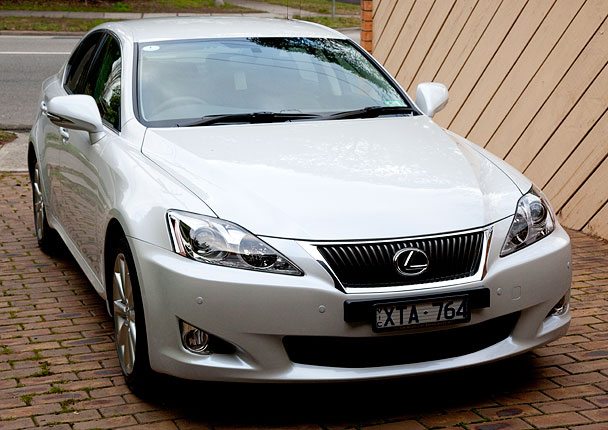 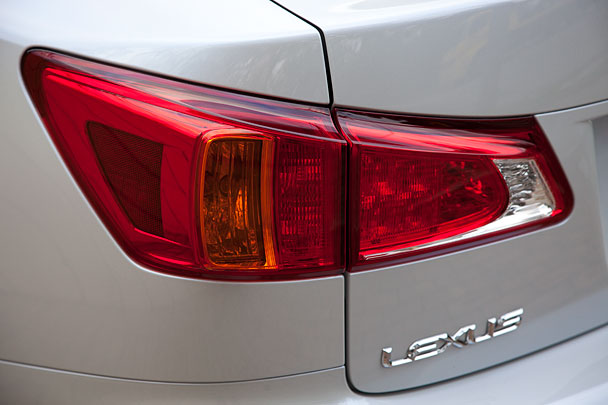 At first glance the tail lamp assembly looks the same as the 2006 car, because it has the same overall outline, but in fact it’s a completely new assembly. 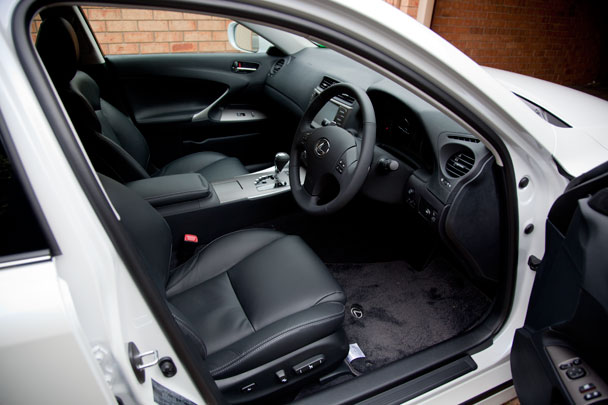 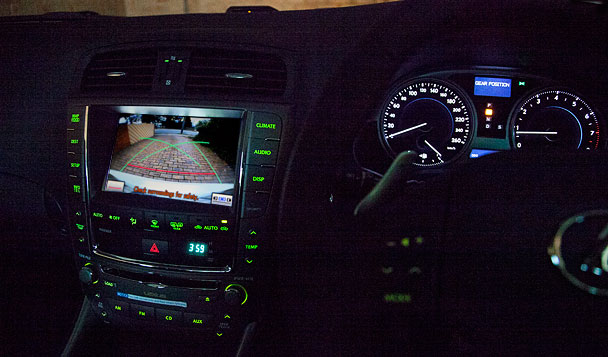 The rear view camera has higher resolution. The parking guides shown above are for reverse parking into a kerb parking space. There is a choice of other parking guides for different situations. Some show where your car will end up based on your current position and the way you are turning the wheel, and will also show if your car will fit in the space. 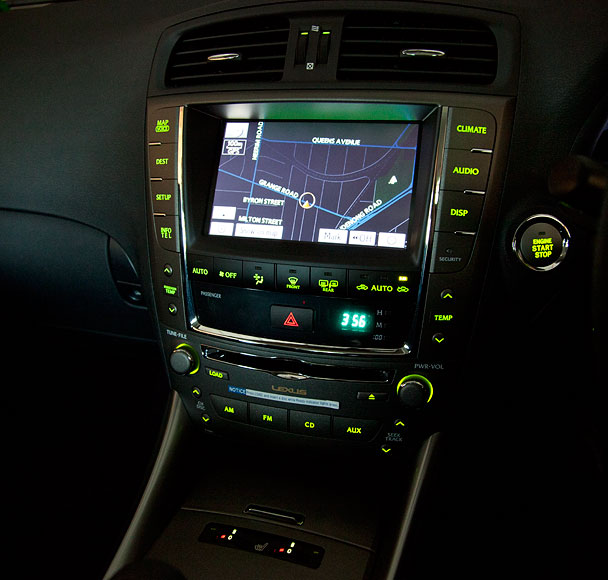