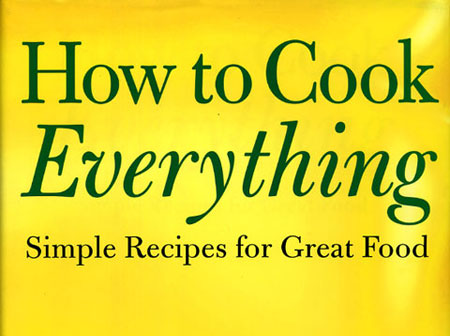 Today is a great day to write about some iPhone apps, because Steve Jobs, CEO of Apple, announced the iPhone 4 today.  It’s a sensational update, and the good news is that the new iOS 4 software will be a free update for 3G and 3GS iPhones.

It might seem a little odd, or at least conflicting, that I’m writing about the new iPhone apps I bought last Saturday night, on my blog pages, when I have a page dedicated to iPhone apps on my home website.  The difference is that in my blog posts I mostly write about current or recent happenings and thoughts, such as the purchase of two new iPhone apps a few days ago.  By contrast, in the iPhone Apps page on my home website, I’ve mostly written about apps after I’ve used them for many months and find them invaluable, or especially interesting (such as the Remote control for iTunes on the computer). 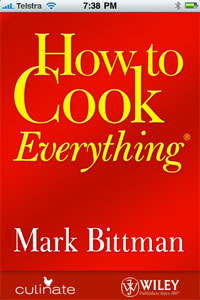 The thumbnail image for this post is a scan of the front cover of the Mark Bittman book “How to Cook Everything” which I’ve had since it was first published in 1998.  It’s a big book – 944 pages.

Mark Bittman is a columnist for The New York Times who writes under the heading of “The Minimalist.”  You can read about him on his blog at http://markbittman.com.

In the past year or so when I’ve seen his book on the shelves at Borders and other bookshops I’d noticed that the cover was now red instead of yellow, but I didn’t pay any attention to it.

Well, not until last Saturday night, when I discovered that the Mark Bittman book is available as an app on the iPhone.

* app features such as search, filters and shopping list 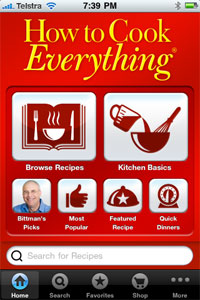 The iPhone app is great and a delight to use, and it has features that the books can’t have, such as searches with filtering, and a built-in timer in the recipes.  When the recipe calls for you to heat the frypan for one minute, you click on the time in the recipe,  and up comes a timer set for 1 minute.  The timer alarm sound is worth the price of admission.  A very useful feature is that if you’d like to cook a recipe that sounds tempting, you can click on an icon to add its ingredients to a shopping list.

So far I’ve tried three recipes.  One was for fried eggs, which I’ve been cooking for 45 years, but Mark Bittman’s way of doing it was different to the way I’ve always fried eggs in the past.  It’s such a simple dish, and I’ve always loved bacon and eggs for breakfast since I was a child (when Mum did the cooking).  But in my retirement I’ve only cooked bacon and eggs a few times a year because it has always given me indigestion for a few hours and has tended to ruin my day.  I always vow never to have it again for breakfast, but months later I forget the discomfort and try it again.  Perhaps it’s the way I’ve fried the eggs, so I’ll try it again one day using the Mark Bittman method, as the result of my first trial was very pleasing and tasty.

The second iPhone app I bought last Saturday was Things.  It’s a task manager with a difference.  It’s also a project manager, in which your tasks can be broken down into all the steps needed to implement the project.  Things is the iPhone app of the week on the iTunes App Store this week.  However, it’s the type of app where I wouldn’t post a review until I’ve been using it for many months to see if I’ve found it genuinely useful – or whether I don’t bother looking at it and have, in effect, I’ve stopped using it.  For example, MS Outlook has a To Do list section which I entered all my task into last year – and this week was the first time this year that I looked at it.

Tonight I used my Kuhn Rikon  frypan pressure cooker to cook rice in 4 minutes, and then use it to cook stir fry beef and vegetables.  It’s so convenient and time saving.  It reminds me that one day I must write a blog post about pressure cooking.  Perhaps I should make a note about it in Things.  [superemotions file=”icon_smile.gif” title=”Smile”]