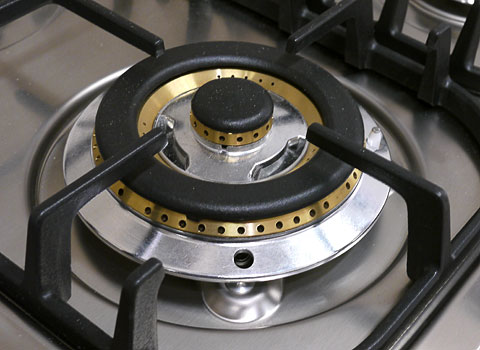 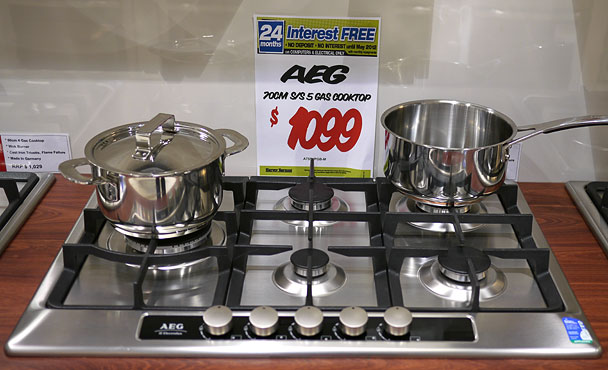 On Wednesday (two days ago) it was seven months since I bought my portable Breville Ikon Induction Cooker (model BC200). Since the day I bought it the Breville has sat on a cutting board on top of my gas stove-top and I have used it exclusively for stove-top cooking for those seven months. That’s been a good trial, so on Wednesday I removed the Breville and put it away.

Since then I’ve cooked with my 27 year old gas stove. It’s too horrible to show you a photo of it. But I have to say that returning to cooking on the gas stove-top gave me a warm feeling. It felt as though I was returning home after being away for a long time. And it was great to be able to once again use my favourite pan of all time – an Anolon Advanced 26cm Covered Chef’s Pan (3.8L) – an aluminium pan, which of.cannot be used on an induction cook-top. 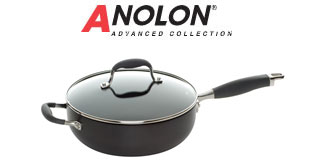 The pan has heavy gauge, hard-anodized aluminium construction which provides fast and even heat distribution and is claimed to be twice as strong as steel durability.

What I like is the non-stick surface (inside and out), the glass lid, and the shape of the pan which has high sides with a gentle curve into the base which makes it great for stir frying, sautéing and pan frying.  I also use it for cooking pasta, then draining the pasta and continuing to use the pan to cook the rest of the dish – adding back the pasta  if desired.  It’s a very versatile pan.

On Thursday I went to the big Harvey Norman store at Chadstone and had a look at the gas cook-tops they had on display.  I definitely like the induction cookers, but I’m a little concerned at having my cooking 100% dependent on electricity, and in saying that I mean not only oven and stove-top, but also my electrical appliances.  I’m not sure if my electrical circuits could handle it all safely, plus air-conditioning in summer.  That’s when we start hearing news reports that the electrical grid is overloaded and many suburbs suffer power failures.

Cooking with a gas stove-top gives backup in case of electricity failure, and of course my electrical appliances give backup in case of gas failure.  Also, one of the advantages of staying with gas is not only the wider ranger of utensils that can be used, but also that my kitchen already has the gas connections for the stove-top.  There would be no disruption as would be involved in installing new electrical circuitry, with a higher power level, from the stove back to the power junction box on my front porch.

At this stage I’m undecided which way I’ll go if I replace my stove-top with a new one.  Induction stove-tops are so easy to clean and that is a big consideration for me, but gas has a certain visceral appeal for me – an emotional rather than intellectual appeal.