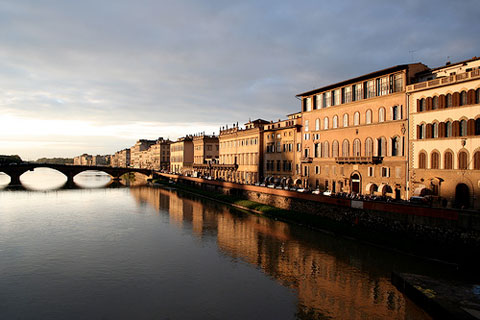 The thumbnail picture for this post on my blog home page is a beautiful view of Florence at sunset.  I’ve never been to Italy, but I did fly over it on my way home from London in 1993.  And in my childhood, from age 5 to 8, I grew up in Mount Gambier, South Australia, with an Italian prisoner of war in our home.  His official job was as a labourer on our 5 acre block of land, of which about 3 acres were devoted to all kinds of vegetables, a glass house for tomatoes, a passionfruit trellis, a 100 foot long bean and pea trellis, sand bed for asparagus, a maize patch, fruit trees, a big walnut tree and fowls.  The other 2 acres were a paddock for a cow or two.  Tony was treated like a member of our family, and to me was a friend and company.  We all liked him, as did our family friends.

The following photo shows another admired Italian – the beautiful 2010 Maserati Quattroporte.  I find it more exciting than a Ferrari. 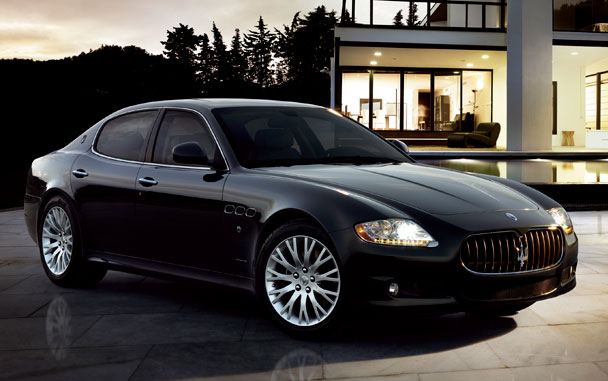 I have many reasons to want to see how much of the Italian language I can pick up this year.  But early last week it crossed my mind that as we grow closer to the half year mark, I haven’t made all that much progress.  I forget most of the words I learn about an hour after learning them (not just the Italian word, but even the English word that I’ve forgotten the Italian word for).  I can’t yet construct even a simple sentence in Italian.  And I’m still struggling with the basic pronunciation of Italian words because of the inconsistent explanations in all the sources at my disposal.

This week I went into the city CBD for the first time this year, and as fate would have it, twice.  I took this opportunity to visit the Foreign Language Bookshop in Collins Street where I became interested in two books on my first visit.  I ended up buying them on my second visit, after researching their reviews on Amazon.

It did cross my mind that I already had enough books and iPhone apps about learning Italian, and I didn’t need any more.   But these two books each had a different “teach yourself” approach that appealed to me.

As I mentioned above, my main concern has always been pronunciation, as I’ve noticed many variations in my different books when it comes to vowels.  And quite often the words spoken by supposedly native Italian speakers in my iPhone apps have confused me even more.

One of the new books explains where your tongue should be when pronouncing vowels and consonants.  That’s taken me back to primary school days when one of the subjects was English.

The other book talks about language similarities on page 1, and in doing so, it struck a chord with me for the first time, when I realised that there is often a pattern between English and Italian words that would help me understand the Italian words in print (but not in speech, as the pronunciation is greatly differently).

These patterns are helping me to remember many words, such as the Italian for “slowly” which I first learned in January.  I’ve tried to recall it many times over the past four months (to use in the phrase “please speak slowly”).  I’ve looked it up every time, but I’ve never been able to remember it afterwards, even at the beginning of last week.  But now I’ll remember it always, as I’ve known the Italian for “slow” since the age of eight in my pianoforte and music studies.  Lento.

The pattern to turn the adjective “slow” into the adverb “slowly” is to add “mente” to the end of the Italian word.  Lento becomes Lentamente.  The o changes to an a,  but that doesn’t matter as it reminds me of the actual word.

Correct pronunciation of Italian remains my greatest stumbling block, as I want to get this sorted out before I proceed further.  But in the past few days I’ve now begun to wonder if this is really as far as I want to go.  I get a great kick out of my new found ability to pronounce all Italian words reasonably well, even if I have no idea what they mean.

I’ll be very surprised if I’m ever able to speak or understand spoken Italian, but I’ve totally enjoyed my studies so far.  However, I’m currently thinking that my real interest is not in learning Italian to be able to converse in Italian, but to get an understanding of another language.  I’ve found that this fascinates me.

So, I’m now thinking of doing some basic German and French studies to get a bit of an inkling into those languages and their pronunciation.  I’d like to be able to pronounce German and French words better than I can now.

I’ve seen a book on Amazon about French pronunciation that I’ll keep a lookout for in local bookshops, as it goes very deeply into pronunciation, which I expect applies to all languages.  It explains the complexities of pronunciation whereby the mouth and tongue change shape and position for, say,  c or k, which have the same sound, in expectation of what follows in say, cool and keel.

The 20 volume OED (Oxford English Dictionary) has the following entry:

A bartender in an Italian or Italian-style bar. Also spec. (orig. U.S.): a person who makes and serves coffee in a coffee bar (the more frequent sense in English).
In spec. sense, a proprietary name in the United Kingdom.

1982 P. Hofman Rome, Sweet Tempestuous Life 24 A good barista can simultaneously keep an eye on the coffee oozing from the espresso machine into a battery of cups, pour vermouth and bitters+and discuss the miserable showing of the Lazio soccer team. 1988 Boston Globe (Nexis) 13 Dec. 61 A feisty but cordial competitor to the larger caffeine chains the [Boston Coffee] Exchange has unfurled a help-wanted poster titled ‘Learn to be a coffee barista’. 1990 Atlantic Nov. 157/2 This ritual unites all the baristas in Italy. But not everyone accomplishes the layer of light-colored crema, or foam, that is the pride of an expert espresso-maker. 1999 Dominion (Wellington, N.Z.) (Nexis) 24 Feb. (Business section) 24 New bariste undertake an intensive training programme which covers the philosophy, history, and science of coffee, and the psychology of service. 2001 Times 7 Mar. ii. 5/1 The key to a good espresso lies in the barista+and whether he or she cares enough to do it right.