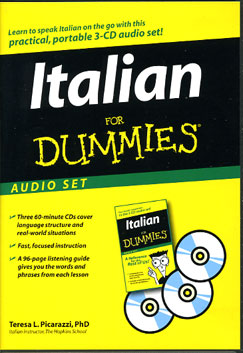 It’s only last Thursday that I drove to Chadstone shopping centre – the biggest in the Southern hemisphere – to buy the Italian for Dummies Audio Set. It’s an audio course with 3 CDs and a small 96 page book that you can follow along with the CDs to see in print the words you are hearing, and repeating.  I’ve used the CD case as the thumbnail for this post.

I’ve seen this audio set at Borders for the past two months but have resisted buying it.  I finally decided that it would be helpful.  I half expected that the CD set I’ve seen at Borders for two months, would’ve been sold since my last visit.  But instead, the set was almost everywhere I looked.  Borders had a Dummies promotion going on.

What surprised me was that Italian for Dummies (a normal size Dummies book) was in stock for the first time this year.  I pounced on it.  It comes with one audio CD. 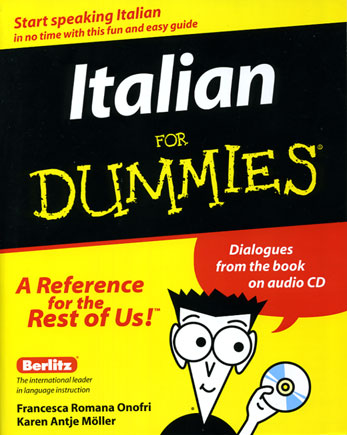 I’ve only been studying the book for three days, and only in small doses, but I’m very impressed with it’s totally different way of explaining pronunciation.

This has led me to a better and more confident way of pronouncing Italian words.

To follow up on my last post, a typical problem I’ve had is how to pronounce the word “giorno.”

The Complete Idiot’s book says that all vowels in Italian are pronounced, but are slid together in the case of dipthongs (two vowels slid together to form one sound. So technically, giorno is pronounced jee-ohr-noh.  But the jee-ohr part should slide together quickly to form johr.  Hence,  johr-noh with a rolled r.

The Dummies book explains this in a totally different way.  It states that an e or i after a g indicates the g should be pronounced the same as j in jam, instead of  the usual g as in get.  Where the Dummies book differs is that it says that to obtain the “j” sound before a,o or u you have to insert an i.  But it then goes on to say, and this is the big difference, that the i serves only to indicate the proper sound of the g, and you do not pronounce it.  Hence giorno is pronounceed johr-noh (and not jee-ohr-noh).

It’s interesting, but this totally different way of explaining the pronunciation has made it a lot clearer for me.  Instead of trying to remember lots of rules, I’ve now got a different way of looking at it and understanding it.

However, I’m still having trouble with the pronunciation of o.  The Dummies book says it’s o as in piano (which they write as oh as a guide) and leaves it at that.  An example – espresso.   But I know from listening to Italian there are two ways of pronouncing the vowel, often in the same word.  An example – giorno!

You might by now be thinking that I’ve been learning Italian for almost three months and still haven’t got past buon giorno.  That’s quite true.  But it’s just an example of the some of the confusion in my mind from the different books and sources I’ve been using.  I’d like to get it sorted out in my mind.  At this stage I’m interested to learn whether the books are either wrong in places, or different people have different ways of hearing sounds,or whether the books are dumbing it down for beginners, or even just to make it easier for the authors.

The reality is that I can say buon giorno (as no doubt can you) well enough to be understood by any Italian.  But I’ve noticed the differences between books and travel guides, and I’ve perhaps become more interested in the linguistics side of it than in actually learning Italian itself.

As an example, how would you set out how to pronounce the word “question.”

I’ve looked it up in the OED and it says kwestjun.  Well sort of. The u is shown in the OED as an upside and back to front e.  That symbol sounds like a in another.